On July 27, Ms. Biles withdrew from the Tokyo Olympics gymnastic competition. Despite her absence, the U.S. women took the silver medal. Even gymnastics is still a team sport. And today, Suni Lee won the all-around gold medal in women’t gymnastics.  Talk about rising to the occasion! 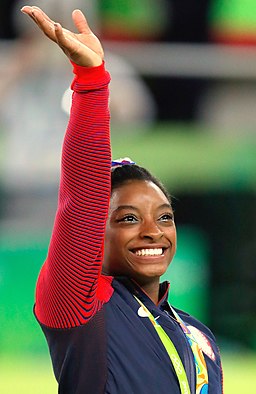 Biles has been criticized for dropping out. According to Fox News, she commented

“Today has been really stressful, we had a workout this morning; it went OK but during that five-and-a-half hour wait I was shaking – I could barely nap. I had never felt like that going into a competition before. I tried to go out here and have fun; the warmup in the back went a little bit better but once I came out here I was like, ‘no, mentals [sic] not here so I just need to let the girls do it and focus on myself.’”

Reporters and pundits (who probably wouldn’t know the difference between a pommel horse and the uneven bars) took to the internet with their hot takes.

Clay Travis of Outkick.com weighed in with this gem:

Denver talk-show host Ross Kaminsky came up with this bit of snark:

To his everlasting shame, Charlie Kirk (yes, the TPUSA guy) emitted a three-minute screed at the end of his July 27 show. (To avoid bias, this transcription was done by an automated service, otter.ai. If you want to see and hear Mr. Kirk, the video clip is at the end of this article.) 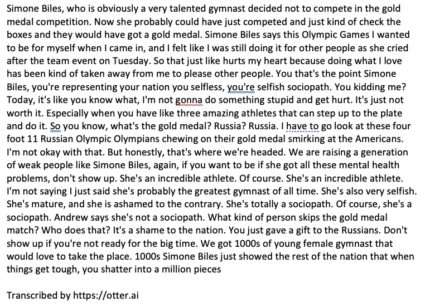 Piers Morgan weighed in with this little bit of lunacy.

Yeah, Piers. When was the last time you actually risked your life in an athletic competition? My guess: never.

These people have never competed in any athletic competition, much less at the Olympic level. In high school and college, I ran cross-country and track. Luckily for me, that was in the days before participation trophies. Otherwise, I would have several shelves filled with them. Mental preparation is at least as important as the strenuous workouts. But gymnastics, as performed by Ms. Biles, is flat-out dangerous. If she makes a mistake six feet in the air, she could face the rest of her life in a wheelchair – at best. Those who mocked her for withdrawing deserve all the scorn they are receiving. (The occasional broken bone in track events is caused by stepping off a curb awkwardly. Not the same level of danger.)

To support my argument, here’s an actual former gymnast describing the “twisties.” (Click the link to read the whole thing.) 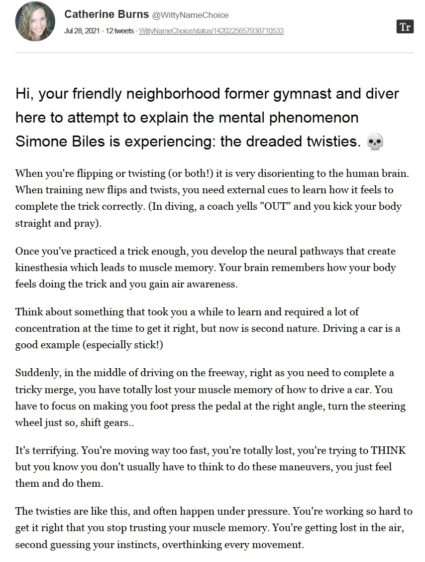 The quotation from Ms. Biles at the beginning made the headlines. That overlooks her shoutout to her teammates. (Same Fox News source as above.)

“I’m sorry. I love you guys, but you’re gonna be just fine,” Biles told her teammates. “You guys have trained your whole entire life for this, it’s fine. I’ve been to an Olympics, I’ll be fine. This is your first — you go out there and kick a–, okay?”

As promised, here’s the clip of Charlie Kirk.  The only editing is removing the beginning and ending parts (subjects unrelated to Simone Biles).