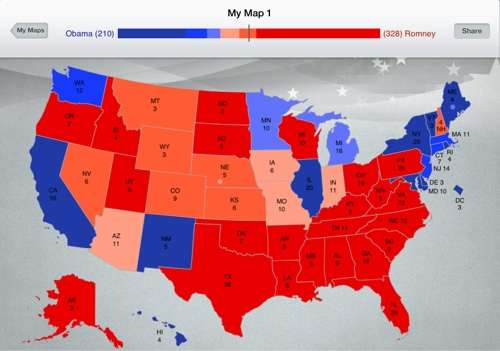 I’m predicting that Mitt Romney and Paul Ryan will win in a landslide November 6.  My methodology is simple: read all the polls, rip them up and throw them away.  Read all the editorial endorsements, tear them up and throw them away.  Listen to my gut instead.  Yeah, I know it’s not scientific, but most polls have a “refuse to answer” rate around 90%.  That means their numbers are based on a sample that is far from random.  (For those interested, Iowahawk has written an excellent piece on this subject.  Ignore the statistics and math at the beginning, because he’s just going to tell you how irrelevant it all is.)  Just for kicks, my electoral map is shown above.  Don’t like my map?  270ToWin is an app available for the iPad for $0.99.  Or you can fiddle with the map on their website.

I’m not alone in this prediction.  Larry Kudlow tweeted this earlier today: