Those numbers don’t align with mine, so I asked Ken for his sources.  He pointed me to two websites:

A Digression On a Misleading Treasury Definition

The second source is from the Treasury and includes a number of definitions.  Here’s one of them:

Why does the debt sometimes decrease?

The Public Debt Outstanding decreases when there are more redemptions of Treasury securities than there are issues.

While that is technically true, it lies by omission.  The debt decreases when government revenue exceeds government spending.  Only in that circumstance will there be “more redemptions of Treasury securities than there are issues.”

Ken used the U.S. Debt Clock for his debt numbers.  The clock also includes a number of other measures: 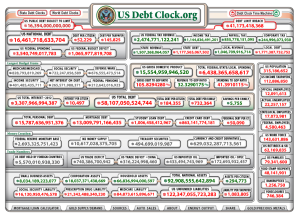 Sure enough, right there on the fourth line the Debt Clock says:

No arguments about the GDP number.  But the debt as reported on the Debt Clock is gross government debt including state and local debt.  In my previous article I used two sources: Treasury and the Federal Reserve.  The Fed reports on two series: Debt Outstanding Domestic Nonfinancial Sectors – State and Local Governments Sector and Debt Outstanding Domestic Nonfinancial Sectors – Federal Government Sector.   On January 1, 2012 those two numbers were $2,985.00 and $10,810.61 respectively.  (All figures are in billions of current U.S. dollars.) The total is $13,795.61. On the same date, the Treasury reported the government debt was $15,582.08. (Click here to download my Excel workbook with the gruesome details.  Debt figures are from the FRED database at the St. Louis Fed.  GDP figures are from BEA.+

One of the main differences is that the Fed excludes holdings by financial institutions.  I attributed the entire difference between the two totals to this factor, a difference of  $1,786.47.  I then added that difference to the Federal Reserve’s figure for federal government debt, giving a total of $12,597.08.  Using that total the debt-to-GDP ratio is 83.56%.  Using federal government debt held by nonfinancial institutions, the same ratio is 71.71%.  The ratio only rises above 100% when state and local debt is included.

The U.S. federal government debt is owned by many different people, governments, businesses, and institutions.  But it’s important to understand at least the basic components of the debt and how they relate to each other.  I hope this has been a small contribution to this discussion.

One Reply to “More on the Deficit and the Debt”