For those who enjoy mucking around in the entrails of economic data and procedures, I present for your enjoyment this treatise on the seasonal adjustment process and initial claims for unemployment benefits.

This was provoked by a blog post at Newsbusters.org titled “Wires Trumpet ‘5-Year Low’ in Seasonally Adjusted Jobless Claims, Ignore Year-Over-Year Rise in Raw Claims.” The author, Tom Blumer, looked at the seasonal adjustment process for initial claims for unemployment and concluded that the data was rigged.  I was intrigued because I’ve had suspicions about BLS data for some time.  Unfortunately, my conclusion in this case is that Mr. Blumer did not look closely enough at the data.

Seasonal adjustment has a long history with data of all sorts.  It’s a statistical process designed to identify and quantify the regular ups and downs that occur during a year.  Seasonally adjusting the data allows economists to focus on the underlying causes of fluctuations in economic data without having to worry about seasonal factors getting in their way.

Examples of seasonality are not hard to find.  Ice cream sales rise in the summer and fall in the winter.  The demand for ski gear rises in the winter and falls in the summer (unless you’re fortunate enough to be able to follow the snow into the other hemisphere of the planet).  Identifying seasonal patterns and putting them into numbers lets us improve our analysis and forecasting.  Generally, it is a good thing.

While I’m tempted to include an example here, I’ll put that off until later.  Those who would like to see the example can easily scroll to the bottom of this piece where you’ll find all the numbers you could want.  First I want to look at initial claims for unemployment benefits (sometimes called first-time claims).

These claims are filed by people who have just become unemployed for whatever reason.  Consider workers in the retail ice cream business.  We might expect a number of them to file first-time claims beginning in mid-November as the ice cream business begins to melt (sorry).  In this context, “initial” and “first-time” mean the first claim filed for the current spell of unemployment.  It is not necessarily the first time in their lives or even the first time this year.  The Department of Labor reports this data weekly, making it an excellent, if noisy, signal of likely changes in broader employment and unemployment statistics.  You can download the DOL data by clicking here, but that will give you a web-style table.  If you click here you can download the data since the beginning of 2011 as an Excel file (courtesy of your author).

When would you expect first-time claims to rise the most?  In the U.S. most of us would guess after the end of the Christmas shopping (and returns) season.  And you would be correct.  That’s the basis for Mr. Blumer’s claim made in the following table: 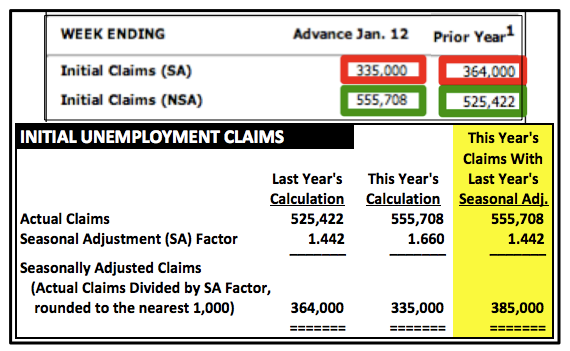 The problem is that there are not exactly 52 weeks in a year.  For “prior year” Mr. Blumer used the week ending January 14, 2012 when the seasonal factor was 144.2.  The question is whether that was the correct week for comparison purposes.

What about 2012? Christmas fell on a Tuesday, as did New Year’s day.  Returns continued for the rest of the week of December 31, meaning the real layoffs didn’t begin until the week of January 7.

Every single year there is a spike to the neighborhood of 165 in one of the first two weeks in January.  But you must be careful to pick the correct week based on the day of the week on which Christmas and New Year’s fall.

When I first read Mr. Blumer’s piece, I thought he had found the smoking gun that would show the statistics are being cooked.  I’m afraid that’s just not the case — at least this time.  Keep trying, folks.

Why divide by 100?  For reasons best known to the statisticians in Washington, D.C., economists like to express “index numbers” multiplied by 100.  To use any of these numbers for actual calculations, you must first divide by 100.  The Consumer Price Index, the GDP deflator, and a host of other economic statistics fall into this category.  Seasonal adjustment factors are another example.