Most people are aware of the proposal for the U.S. Mint to strike the one trillion dollar coin. The Treasury would turn the coin over to the Federal Reserve.  The Fed would credit Treasury’s account with $1 trillion and the government could continue to spend without exceeding the national debt ceiling.  There are some quibbles about the legality of this proposal.  I’ll mention them and provide links at the end of this article.  My main purpose here, however, is to collect some of the more comical comments — mainly from Twitter — that have been made.  I will, of course, mention my slim contribution early: what should this coin be named and whose image should appear on its face? But before that, I want to talk about the recent demise of this proposal and the language used by White House Celebrity Spokesmodel Jay Carney to make the announcement.  This will just take a minute, then I’ll get to the humorous stuff.

The following quotation from Mr. Carney is via the Huffington Post:

There are only two options to deal with the debt limit: Congress can pay its bills or they can fail to act and put the nation into default,” said Press Secretary Jay Carney. “When Congressional Republicans played politics with this issue last time putting us at the edge of default, it was a blow to our economic recovery, causing our nation to be downgraded. The President and the American people won’t tolerate Congressional Republicans holding the American economy hostage again simply so they can force disastrous cuts to Medicare and other programs the middle class depend on while protecting the wealthy. Congress needs to do its job.

Is simple accounting really that difficult?  Apparently for our math-challenged president, it is.

A Serious Digression on Default

First, a definition: default is a failure to make payments on debt obligations when the payment is due.  Have you ever been late with a credit card payment?  Or any other debt obligation?  Technically you were in default.  But here’s the funny thing about government default: the government has a steady stream of tax revenue arriving every second.  It is up to government officials — the President, Treasury secretary, and anyone else that is invited to the meeting — to decide the uses to which that tax revenue is put.  They can choose to not pay the debt obligations but let’s be clear on one thing: default is a choice, not a necessity. The government can choose to pay debt obligations and, perhaps, do something that will be very popular with the American public like ending the war on marijuana.  Or scaling back the sexual abuse practiced by the Transportation Security Administration at our airports.  Just as the government spends tax revenue in millions of different ways, it also has millions of ways to cut spending.

Now that we understand that default is not an automatic result of reaching the debt ceiling, we can relax and have some fun.  My modest contribution was to encourage a competition for names for the trillion dollar coin.

That was the hashtag I proposed on Twitter.  I had no idea there were so many people with so much time on their hands.  Here is the entire response to #NameTheCoin: 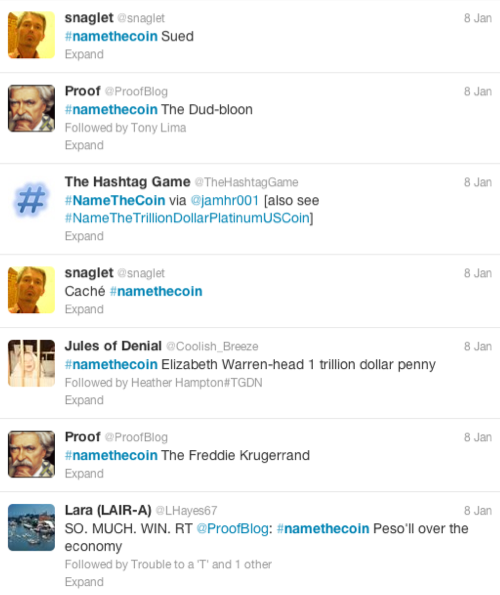 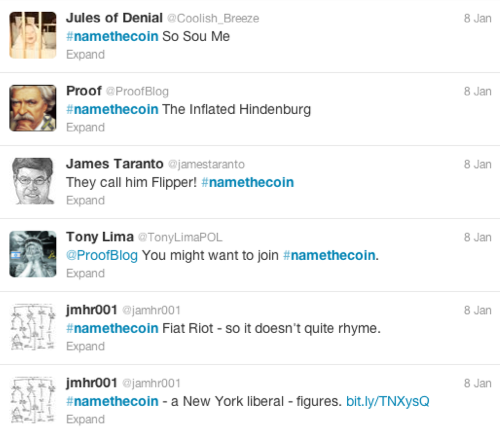 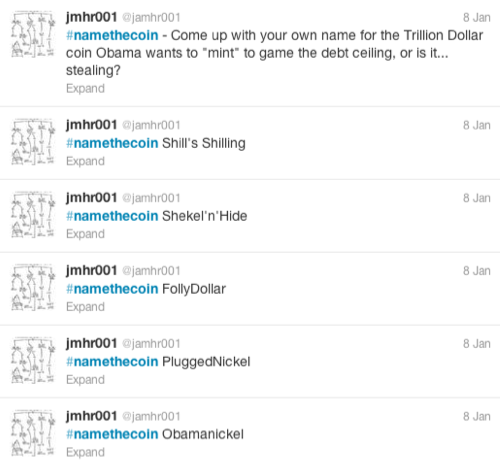 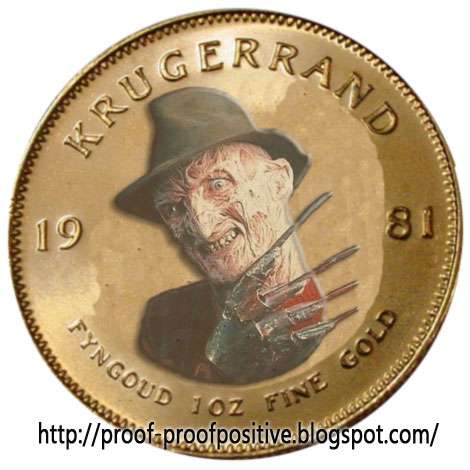 As far as I can tell, the #MintTheCoin hashtag was invented by Joe Weisenthal (@TheStalwart, columnist for BusinessInsider.com).  Here are excerpts from one of his early columns supporting the idea: 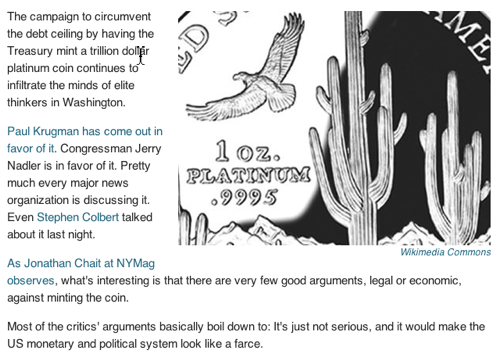 Joe Weisenthal On Minting the Coin

It wouldn’t be a real column about fiscal and monetary policy without an excerpt from a real economist.  Prof. Stephanie Kelton (U. of Missouri Kansas City, @DeficitOwl) is one of the best and most articulate, so why not quote her? Good idea: 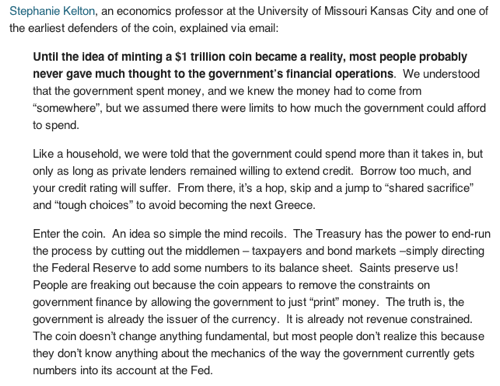 Prof. Kelton on Mint the Coin

For those interested in historical accuracy (really?), Joe Firestone has the most comprehensive article I’ve found. (Suggestions are, as always, welcome.)  He focuses on blog entries and comments, completely ignoring the far more important Twitterverse. 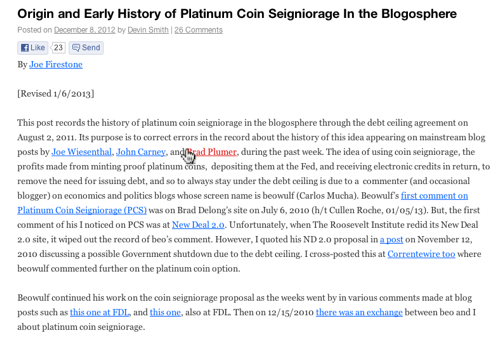 History of Platinum Coin Seignorage in the Blogosphere

But, sad to report, the White House has dismissed this idea without much comment (except the mandatory major error by Jay Carney mentioned at the beginning of this article).  Here is an excerpt from another article by Joe Weisenthal under the headline COINTASTROPHE: White House Rules Out The Trillion Dollar Coin Option To Break The Debt Ceiling. 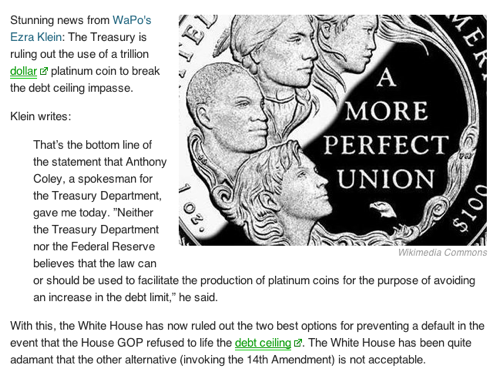 Comments from Twitter: A Slideshow, Wait for Eleven Slides

Rather than present these one at a time, I’ve decided to display them as a slideshow.  The reason is simple: creating slideshows in WordPress is difficult and I haven’t made myself crazy today (yet).  This should do it.

One obvious question: Is this really legal?  Apparently it is.  The relevant section of the U.S. code is 31 USC § 5112 – Denominations, specifications, and design of coins, specifically, section (k): “The Secretary may mint and issue platinum bullion coins and proof platinum coins in accordance with such specifications, designs, varieties, quantities, denominations, and inscriptions as the Secretary, in the Secretary’s discretion, may prescribe from time to time.” (http://www.law.cornell.edu/uscode/text/31/5112)

There has been some debate about the meaning of “platinum bullion coins.”  Apparently this means that the coin would have to contain $1 trillion of platinum.  Paraphrasing Bill Murray from Ghostbusters, “That’s gonna be one big coin.” However, the second part of the clause, “proof platinum coins” would appear to give legal authorization.  (A proof coin is one struck, but never intended for circulation.  I think it’s a pretty good bet that the trillion dollar coin would be a proof coin.)

Some people have expressed surprise and wonder that this is the way money actually works.  Surprise!  The dollar bill in your pocket has no intrinsic value and is not backed by gold, silver, weasel pelts, whale teeth, or any other commodity money.  Like most countries, the U.S. money supply is fiat money meaning that it only has value because we all accept it in exchange for valuable goods and services. (Whale teeth were actually used as money in Fiji, although calling them commodity money seems a stretch.  After all, commodity money is supposed to have use value as well as money value.  Whale teeth would, presumably, only be useful to whales.)

If nothing else, this episode has taught quite a few people about money and fiscal policy.  And it is among the best examples of economist “humor.”  The very best humor is stories like this that have elements of truth, teach something about economics, and create fun.  Can’t do much better than this.

One Reply to “The One Trillion Dollar Coin”