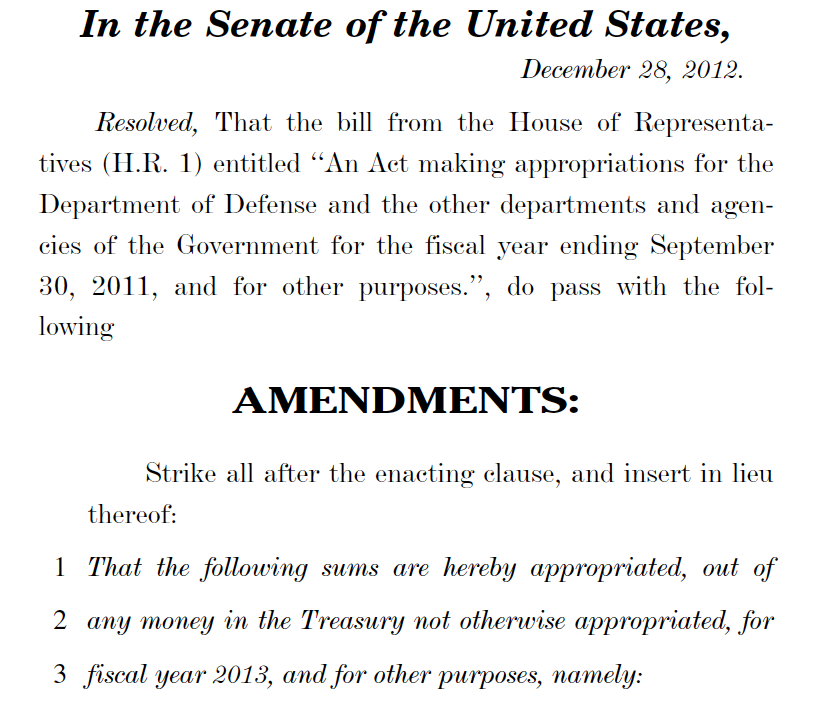 [Update January 5, 2013.  The comment below is correct.  I used “trillion” in several places when I should have used billion. And in at least one place I used billion instead of million. I have made the corrections in the text below.  My apologies for the error.]

House Speaker John Boehner has been lambasted in the media (and by so-called Republicans Peter King and Chris Christie) for refusing to bring the Hurricane Sandy Relief Bill (H.R.1) to a vote.  Along with many others, he has argued that the bill is loaded with pork (referred to from this point forward as Porkulus Obama.  Thanks to @DividendMaster for inventing that colorfully descriptive phrase).  According to my calculations the Hurricane Sandy Relief Bill is 71% pork.

The bill labeled H.R.1 bears no resemblance to anything passed by the House of Representatives.  Basically the Senate gutted the bill and replaced all of it with their own material.  This is from the beginning of the bill itself

In the Senate of the United States,

Resolved, That the bill from the House of Representatives (H.R. 1) entitled `An Act making appropriations for the Department of Defense and the other departments and agencies of the Government for the fiscal year ending September 30, 2011, and for other purposes.’, do pass with the following

Strike all after the enacting clause, and insert in lieu thereof:

That the following sums are hereby appropriated, out of any money in the Treasury not otherwise appropriated, for fiscal year 2013, and for other purposes, namely:

The next time Harry Reid and Barack Obama wonder why they’re not getting much cooperation from House Republicans, perhaps they should think about the insult contained in the above action.

Here’s some advice on using the Excel workbook.  Read the notes, looking specifically for the word “detail.”  That word means there is a worksheet containing additional calculations, usually for individual line items.  Those detail worksheets link back to the main worksheet (labeled Rollup).  It’s best not to change any dollar amounts on the Rollup sheet that are linked to a detail sheet.

Probably the main use of this worksheet is to change my estimates of the percentages allocated to Hurricane Sandy.  In general, if the text specifies Hurricane Sandy, I allocated 100 percent to Sandy relief.  I urge you to read the actual text of the bill before changing these percentages.  To make this a little easier, the Word version of the full text of the bill has bookmarks at the beginning of each Title.

The main Porkulus Obama is in HUD’s Community Development Fund.  Out of a $17 billion appropriation, only $2.52 billion is allocated in line items.  The remaining $14.48 billion can, apparently, be used by HUD for anything it wants.  That’s a cool 33.6 percent of the total.

Another 23.5 percent (about $11.9 billion) is allocated to the Federal Emergency Management Agency.  You might think FEMA funds would be a slam-dunk, but not so fast.  Here’s what the bill has to say about these funds:

“be for major disasters declared pursuant to the Robert T. Stafford Disaster Relief and Emergency Assistance Act” and “the amount in the previous proviso is designated by the Congress as being for disaster relief pursuant to section 251(b)(2)(D) of the Balanced Budget and Emergency Deficit Control Act of 1985”
“shall be transferred to the Department of Homeland Security `Office of Inspector General’ for audits and investigations related to disasters.”
“That these funds are available to subsidize gross obligations for the principal amount of direct loans not to exceed $400,000,000”

You are welcome to read the actual bill.  Be sure to let me know if you can find any reference to Sandy in the FEMA appropriations.

Probably the most egregious (but not the most expensive) example is for State and Tribal Assistance Grants (lines 51 and 52 in the Excel workbook).  These two items are called “Capitalization grants for the Clean Water State Revolving Fund” and “Capitalization grants for Safe Drinking Water Act.”  I know the Mohawk and Mohican tribes are from the general New York area.  But I’m not sure how much of their tribal lands were affected by Sandy.  And this is only $810 million dollars, about 1.5 percent of the total bill.  Here’s what the bill itself says about these two items:

I defy anyone to link that language to Hurricane Sandy.

As usual, the media have completely failed to do their job.  Remember when reporters did the kind of digging I’ve done here?  I know, it’s been a long time, but consider the amount of work Bob Woodward and Carl Bernstein put into Watergate.  Point me to a reporter working for a major media outlet today who’s working half that hard and I’ll be impressed.  I will concede that Jake Tapper (now CNN, previously ABC) is doing a pretty good job.  For his efforts he will no doubt be banned from the White House press room.