Money, income, and wealth are three words familiar to everyone.  People often use them interchangeably.  But to economists these three words have very different meanings.  My goal is to explain what each means and how the three are related.

Money is anything that is widely accepted in exchange for goods and services in ordinary commercial transactions.  In other words, money is whatever you use to buy stuff.  Many people call paper bills and coins “money.”  Economists call those items currency.  Today just under half of the U.S. money supply is currency.

A while back some otherwise sensible economists proposed having the U.S. Treasury Department mint a $1 trillion coin.  Getting into the spirit of this idea, I asked my Twitter friends to name the coin and (if possible) provide a design.  The winner was the Freddie Krugerrand: 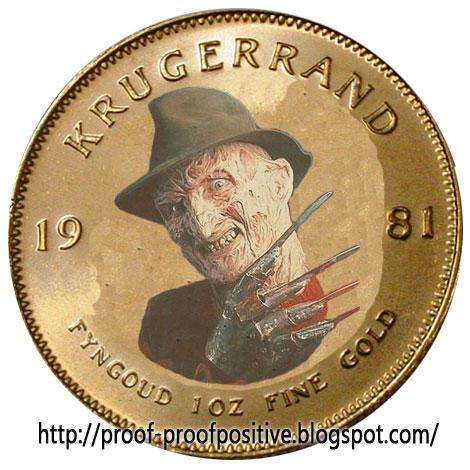 [A note from my attorneys: the above coin is not legal currency anywhere as far as I know.  Attempts to copy and spend it will almost certainly get you in a lot of trouble.]

But you can buy stuff with things that are not currency.  Your personal check is one example.  If you use a debit card to transfer funds from your checking account to the sellers account, as far as the Federal Reserve is concerned that is identical to writing a check.  What counts is not the paper check or the piece of plastic that is the debit card.  What matters is the balance in your checking account.  For historical reasons, the Federal Reserve calls these balances checkable deposits.  Those balances are a little more than half the U.S. money supply.

Every developed country has a central bank that is in charge of managing the quantity of money in circulation.  In the U.S. the central bank is the Federal Reserve system. The U.S. currency is, of course, the dollar.  But beware — other countries use currencies called “dollars” that usually cannot be exchanged for U.S. dollars one-for-one.  For example, the exchange rate between the Canadian dollar (CAD) and the U.S. dollar (USD) on October 4, 2013 was 1.03213 CAD per USD.  In other words, it took 1.03213 Canadian dollars to buy one U.S. dollar. (I use Oanda.com to find exchange rate information.  Usual disclaimers apply.)

In Europe, a group of countries has decided to use a single currency, the euro. The European Central Bank controls the quantity of euros in circulation.

As of August, 2013, the U.S. money supply (M1) was $2.55 trillion.  That’s a lot of money.  But U.S. gross domestic product for 2013 will be about $16.7 trillion.  That means every dollar in circulation will be spent about 6.5 times ($16.7/$2.55).  Economists call that number the velocity of circulation of money.  (In fact, GDP does not really measure total spending, but it will be close.  Asset transactions, for example, are paid for with money, but are not counted in GDP.  Also, previously-owned products such as used cars are not part of GDP.)

As always, my methods are transparent.  Click here to download the Excel workbook that includes the data shown above as well as much more.

Most of us work for a living and think of our income as what we earn from our jobs.  But there are other sources of income: interest, dividends, and other income flows from lending part of our assets to businesses or governments.  Some people may own rental housing units such as apartment buildings.  The income they earn is called rent.

Many households save part of their income.  There are many reasons for saving: a college fund for your kids, retirement, a down payment on a house, and an emergency fund are a few of the possibilities.  When a household spends less than its after-tax income, the difference is saving.

The accumulation of past saving plus interest, dividends, and capital gains (or losses) is called wealth.  Unlike income. wealth is a stock variable with no time units attached.  At any point in time your wealth is a certain number of dollars.  Wealth increases with additional saving (a flow that increases wealth), interest, dividends, and capital gains (also flows that increase wealth).  Wealth decreases with spending out of wealth (a flow that decreases wealth).  Wealth can also decrease because of capital losses.

Think of Wt as wealth at the end of this year and Wt-1 is wealth at the beginning of the year. St is saving during the year (including interest, dividends, and so on) and Dt is “dissaving,” the amount withdrawn from wealth during the year.  This is typical of stock-flow relationships in economics, finance, and other fields. (Note that dissaving includes capital losses, if any.)

I hope this article has clarified the relationship between money, income and wealth.  You should understand that money is used to purchase goods and services.  While income and wealth are valued in money units, that is their only relationship with money.  Income is the annual flow of purchasing power earned by an individual.  Most people earn at least part of their annual income by renting their labor to a business or government agency.  Wealth is the accumulation of past saving plus any increases or decreases.  It will help you learn these differences by practicing using the terms correctly.