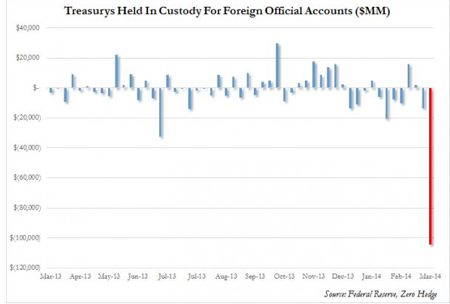 Over the past week, a controversy has developed about whether or not there was a $105 billion “withdrawal” from the Federal Reserve.  As of today, this has morphed into the curious case of the missing 105 billion dollars.  Included in this mystery are writers who apparently contradict numbers and graphs that are either included or linked from their own articles.  My original hypothesis was that the “withdrawal” was Russia pulling out assets ahead of the Crimea invasion.  I’ve changed my mind a couple of times since then.  But after reading today’s reports, I now firmly believe that $105 billion outflow was, in fact, caused by Russia.  And, as an added bonus, I am willing to speculate about where it ended up: Belgium. Read on for the details.

I first got wind of this from Zerohedge (Tyler Durden).  He posted two articles on March 14.  The first pointed to a $104.5 billion outflow from the Federal Reserve’s “custody account.”  The second focused on Russia’s role in this outflow.

The custody account is where the Fed holds U.S. government securities that are actually owned by foreign governments.  The Fed is holding these securities “in custody” for the government.  An outflow in excess of $100 billion is very unusual. During the past year, the second-largest drop in the custody account was $38 billion in July, 2013.  Mr. Durden’s (and my) best guess was that the Russians had pulled their holdings of U.S. securities out of the Fed before sanctions were imposed.  Presumably, those securities could have been frozen by sanctions.  Too late now!

Yahoo finance had this to say: “As the chart shows, custody holdings increased by $32.3 billion this week.”

There”s just one slight problem: the linked chart shows no such thing.  In fact, custody holdings fell by about $67.5 billion.  I’ll discuss that in more detail below when I discuss the Fed.  But we also have an article from Business Insider:

The big question is: will the Russian institutions sell large amounts of their holdings which could de-stabilize the market in the near term?” said Rjavinski and Rusinski. “To be exact, it is roughly a $139 billion dollar question, since that was the latest report amount of Treasuries held by Russian official institutions.”

To put Russia’s presence in the Treasury market into context, China holds $1.26 trillion worth of Treasury securities and Japan holds $1.18 trillion. According to Treasury data, Russia is only the eleventh largest overseas holder of Treasuries.

“Not only are they far cry from the two behemoths – China and Japan – but also place close to the bottom of the “peloton” in the Treasury buyer’s race,” added Rjavinski and Rusinski.

Basically, Russia isn’t really that big of a player in this market.

Oh, really?  As of December 31, 2013 Russia held $138 billion of U.S. government securities.  Data is from the U.S. Treasury Department and is available in my Excel workbook (click here).

Here’s the list of the eleven countries with the biggest holdings of U.S. securities.  You can subtract $105 billion from the total for Russia.

And then Business Insider continues,

There’s only one problem: the graph that accompanies the above statement also contradicts it.  Note the sharp drop in March, 2014 — well below the downward trend the article cites. 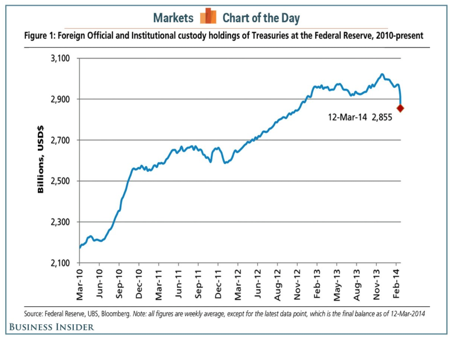 What Does the Fed Say?

Every week, the Fed issues a release titled “Factors Affecting Reserve Balances.”  If you look at this report and become attached to it, my advice is to stop.  The Fed is a big, sprawling organization and their books reflect that.  Use your browser’s page search function (usually Ctrl-F in Windows or Command-F on the Mac) and search for “custody.” That should take you to 1A. Memorandum Items.  Between March 12 and March 19, 2014, the custodial account dropped by $67,746 million.  Remember, the actual withdrawals began the week before March 14, so the $67.5 billion is only part of the total.  (Again, this account for March 19 is included in the Excel workbook.  Click here. If you just want the custody data as a pdf file, click here.)

What’s That About Belgium?

Suddenly, Belgium has become the third-largest holder of U.S. securities.  Again, Zerohedge has the story. 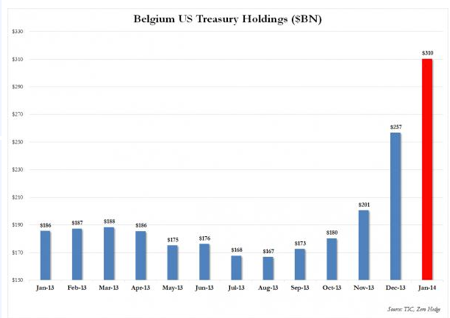 Mr. Durden is cautious interpreting this data.  I have no such compunctions.  It looks to me like a chunk of that flight capital ended up in Brussels (or vicinity — Belgium isn’t all that big).  When the reports for February and March come out, I predict Belgium will move even higher.