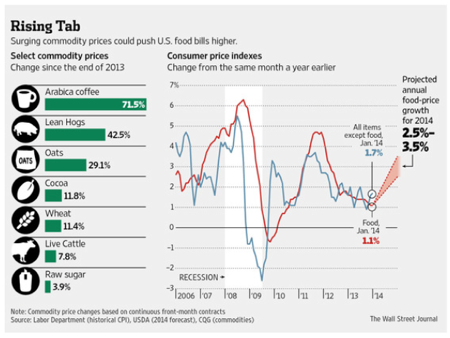 Inflation is right around the corner.  And that will pose a major challenge to the Federal Reserve.

Federal forecasters estimate retail food prices will rise as much as 3.5% this year, the biggest annual increase in three years, as drought in parts of the U.S. and other producing regions drives up prices for many agricultural goods. The Bureau of Labor Statistics on Tuesday reported that food prices gained 0.4% in February from the previous month, the biggest increase since September 2011, as prices rose for meat, poultry, fish, dairy and eggs.

The source of this inflation is rising food prices.  California’s central valley and Salinas valley produce much of the country’s fruits and vegetables.  The drought this year brings back memories of previous droughts in the 1970s and 1980s.  But this time more water is being diverted into the Sacramento delta to help save the delta smelt, an endangered species.  Central valley farmers will receive a water allocation of zero.  Many have already written off this crop year.

A Primer on Negative Supply Shocks

The Federal Reserve does not have the necessary tools to fight this kind of inflation.  Even today, fiscal and monetary policy can only affect aggregate demand.  Increasing food prices are a negative shock to aggregate supply. The short-run impact is a higher price level, higher unemployment, and slower economic growth. The most extreme example of this was the oil price shocks of the 1970s.  At that time we didn’t understand supply shocks.  We learned and improved our models.  But understanding does not mean policy tools have been developed to handle supply shocks.  In brief, the Fed has three choices when faces with a negative supply shock:

The Fed largely focuses on “core inflation” which ignores food and energy prices.  Therefore, they are most likely to not change policy.  But inflation is still inflation.  A higher inflation rate will be factored into nominal interest rates (at least short-term rates).  One way to hedge against unanticipated inflation is to shift your portfolio into Treasury Inflation Protected Securities.  Let’s take a quick look at how the yield curve and inflation expectations have shifted over the last few weeks. 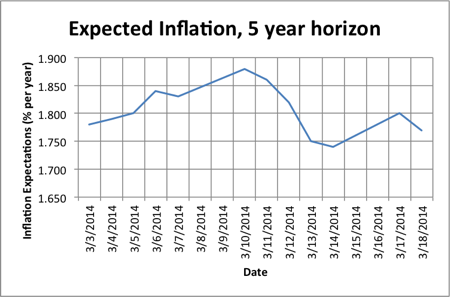 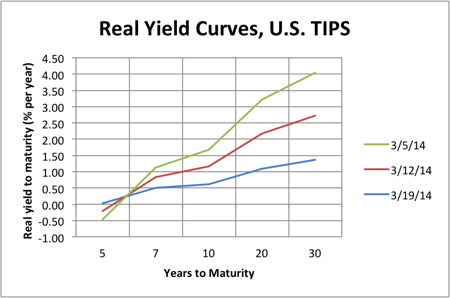 Taken together, these graphs tell an interesting story.  First, expected inflation over the next five years has actually fallen a bit in March.  (The calculation is the nominal interest rate minus the real interest rate for five year government securities.)  However, look at the way the TIPS yield curves have rotated around about a six year horizon.  Longer than that, the real interest rate has fallen fairly sharply, indicating rising prices.  Why would the demand for TIPS rise?  Fear of inflation — or, possibly, just fear in general.  But look at the five year yield.  That part of the curve rotated up, meaning demand fell for the five year TIPS.

Does this mean anything?  Are people really more worried about long-term inflation?  And did the markets get that much more worried in March?  In any case, this isn’t really relevant to short-term inflation.  But it is interesting. (As always, my methodology is transparent.  Click here to download an Excel workbook that contains the underlying data.  Data on the first sheet is drawn from the St. Louis Fed’s FRED plugin for Excel.)

A report in the March 18 Wall Street Journal predicts food prices will rise between 2.5% and 3.5% in 2014.  In January, 2014, non-food inflation (using the CPI) was 1.7%.  Assuming non-food inflation remains constant, the implied overall inflation rate is between 4.2% and 5.2% per year.  Better start planting that vegetable garden right now.

Wheat and soybeans are not much better according to a report out today (March 19).

Soybeans rose to the highest intraday price in more than a week after a Brazilian industry group lowered its forecast for production in the South American country.

Can Imports Save the U.S.?

All of the anti-NAFTA propagandists better breathe a sigh of relief.  Higher U.S. prices will mean greater imports from Mexico.  Central and South America will also contribute.  But that will only dampen the inflation, not eliminate it. And Brazil, supplier of staples like coffee and sugar, is experiencing a drought of its own.

Futures prices for the arabica coffee variety are up 67% since the start of the year. Raw-sugar prices have risen 8%. Soybeans, which have been affected by drought in some areas and too much rain in others, also are up 8%.

Speaking as a coffee addict, I am disheartened to learn that the price of Arabica beans (the good stuff) rose 44% … in February!

In February alone, worries about this year’s Brazilian supplies pushed the price of arabica futures up 44%, the biggest monthly percentage increase in almost two decades.

Can the Fed Do Anything?

I have to emphasize two things.  First, this is short-run inflation, meaning it is not being caused by an increase in the growth rate of the money supply.  Second, this is a negative supply shock, meaning there is very little the Fed can do about it without causing damage to the real economy.  Given that Dr. Yellen eliminated any mention of the unemployment rate from today’s Fed press conference, it’s a safe bet she doesn’t want to cause it to increase.  But if the Fed tightens monetary policy to fight supply inflation, higher unemployment and slower economic growth will be the inevitable result.

I have often wondered what Ben Bernanke thought as financial markets collapsed almost the minute he was sworn in as Fed chair.  Today, Janet Yellen is about to find herself in a similar position.  My advice: buy canned food now. And plant that vegetable garden.  Who knew Michelle Obama could forecast that well? (Remember, her first year as First Lady she planted a vegetable garden at the White House.)