Confession: despite living in the greater Silicon Valley area, I listen to KPCC in Pasadena. Frankly, their coverage is better and more intelligent than KQED, the local station. Another plus: KPCC announcers have their egos under control. A story this morning raised this question: do we need an affordable car act? 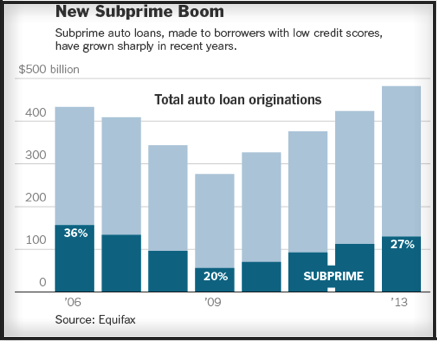 The story is about the subprime auto loan market. KPCC interviewed Jessica Silver-Greenberg, a reporter for the New York Times. Her story, co-authored with Michael Corkery, carries the ominous headline “In a Subprime Bubble for Used Cars, Borrowers Pay Sky-High Rates.”

The story begins with the tale of Ray Durham, 60, whose sole income source is Social Security. He also has a bankruptcy on his credit report. Nevertheless, he got a car loan for $15,197 “from Wells Fargo.”

This is the beginning of some of the most convoluted reporting I’ve seen in quite a while. The loan was from Wells Fargo, but they just did the financing. Mr. Durham got his loan through the auto dealer.  This is what the Times story says:

Mr. Durham’s application said that he made $35,000 as a technician at Lourdes Hospital in Binghamton, N.Y., according to a copy of the loan document. But he says he told the dealer he hadn’t worked at the hospital for more than three decades. Now, after months of Wells Fargo pressing him over missed payments, the bank has repossessed his car.

The reporters failed to ask a key question. Did Mr. Durham sign the loan documents? If so, did he read what he was signing? If not, why not?

Quite a few years ago, an urban legend was making the rounds: “Nobody ever reads their mortgage documents.” I know this is false because I’ve gone through the process of getting a mortgage several times. And each time I read every single word of what I was signing.

It’s immoral to allow suckers to keep their money.

If you don’t do that, you are likely to feel the full weight of Fields’s Dictum →

(“Fields” is W.C. Fields. If I have the attribution wrong, please let me know.)

Back to Subprime Car Loans

Then there’s this allegation:

The New York Times examined more than 100 bankruptcy court cases, dozens of civil lawsuits against lenders and hundreds of loan documents and found that subprime auto loans can come with interest rates that can exceed 23 percent. The loans were typically at least twice the size of the value of the used cars purchased, including dozens of battered vehicles with mechanical defects hidden from borrowers. Such loans can thrust already vulnerable borrowers further into debt, even propelling some into bankruptcy, according to the court records, as well as interviews with borrowers and lawyers in 19 states.

That makes no sense. Lenders expect to repossess many of these vehicles. Why would they make loans greater than the value of the car?

A simple example is in order here. Suppose I want to buy a used car for $10,000. Why would any dealer lend me $20,000 when the collateral — the car — has a value half that amount? After all, for most car loans, the only action the lender can take in case of default is to repossess the vehicle and sell it — in this case, for $10,000. Do these lenders really want to be in the business of repossessing vehicles?

As a result, she [Mary Bridges, a retired grocery store employee in Syracuse, N.Y.] got a loan of $12,473 to buy a 2004 used Buick LeSabre, currently valued by Kelley Blue Book at around half that much. She tried to keep up with the payments — even going on food stamps for the first time in her life — but ultimately the car was repossessed in 2012, just two years after she bought it.

“I have always been told to do the responsible thing, but I said, ‘This is too much,’ ” the 76-year-old widow said.

But Wells Fargo, which resold the car for $4,500 last July, is still pursuing Ms. Bridges for $2,900 — a total that includes her remaining loan balance and an $835 fee for “cost of repossession and sale,” according to a copy of a letter that Wells Fargo sent to Ms. Bridges last August. (Wells Fargo declined to comment on Ms. Bridges.)

I would love to see those loan documents. But, as usual, the Times reporters are more interested in telling stories than reporting the facts. I have posted a comment asking to see some sample loan papers. I’ll update this article if I get a reply.

Ms. Silver-Greenberg and Mr. Corkery try to compare this to the housing bubble and subprime mortgage lending. While acknowledging that the size of the subprime auto loan market is a tiny fraction of the subprime mortgage market, they fail to note another important point. Cars are far more liquid assets than houses. That’s because cars are relatively standardized. Cars, unlike houses, are mobile assets. (Try buying a house and moving it to the part of the country where you really want to live.) And there is a very active secondary car market, commonly called the used car market.

But the short answer is, no, we don’t need an affordable car act.