Today, November 15, is the first day of open enrollment for Obamacare.  Healthcare.gov begins a new season. First up, the state of Washington’s HealthPlanFinder: 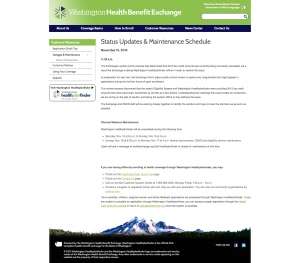 Next, news from Oregon.  You may recall that state spent $200 million building their own exchange website, only to throw it out when it utterly failed.  Now Oregonians who managed to buy insurance last year are discovering they cannot automatically roll their coverage over this year (essentially doing nothing and opting to keep your original plan).  Instead they must re-enroll on the federal Healthcare.gov site.  And they only have until December 15.  According to KVAL television,

Oregon residents who already are covered cannot automatically roll over to the same or similar plan as the one they had last year — as people in other states who relied on the federal exchange last year can elect to do.

Altogether some 300,000 Oregonians could be enrolling in via HealthCare.Gov starting this weekend — 105,000 who enrolled through the state exchange last year and about 202,000 who remain uninsured according to a recent study.

That means there likely will be a lot more scrutiny of the various plans offered by 15 insurance carriers in Oregon, officials said.

Those who want coverage come January must enroll by Dec. 15.

I’m certain this will be the first in a long series of articles.  Stay tuned.