The LFPR continues its precipitous decline. In 2014 it reached 62.9%, the lowest rate since 1977. That’s 37 years, over one full generation. Here’s what it looks like: 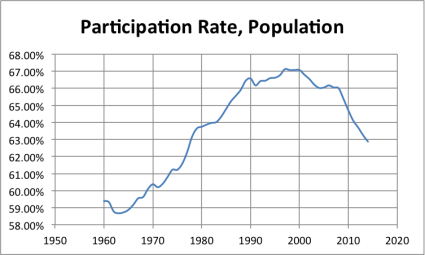 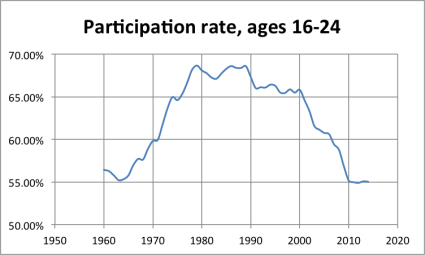 The 25 − 34 group saw a continuing decline in the LFPR, reaching levels not seen since 1982. At least this group continues to have a high absolute rate, over 80%. 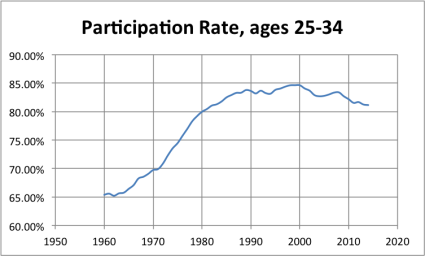 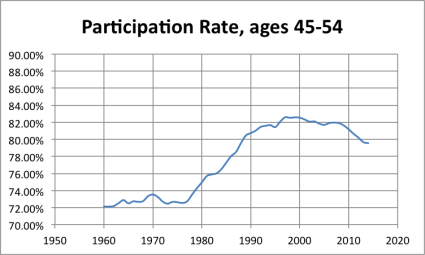 Among the 55 − 64 (“late middle age”) the LFPR seems to have stabilized around 64.5%. This is the first group whose participation has increased during the last seven years. 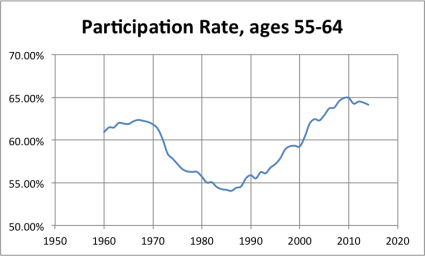 The 65 − 69 group’s participation has increased steadily since 1994. The LFPR seems to have stabilized around 31.5%. Nevertheless, this is a significant increase over the 20% rates we saw in the 1980’s. 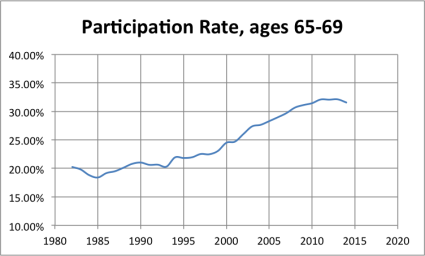 Probably the most startling result is the 70 − 74 age group whose participation rate has nearly doubled since 1987. People are working further into what was once regarded as practically mandatory retirement. 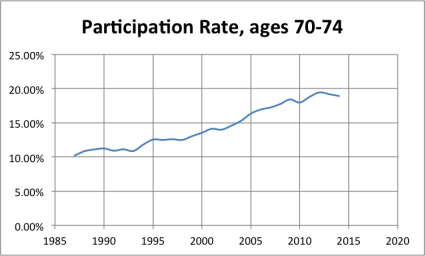 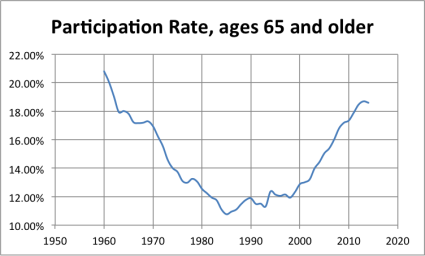 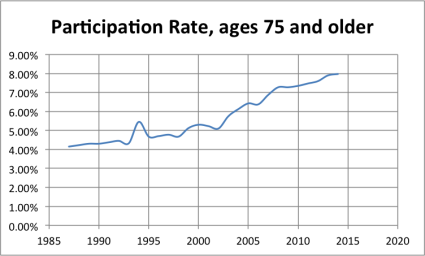 I wish I could say there is good news in this report. But the best I can offer is that some trends seem to have leveled off. At this point, however, it’s safe to say the U.S. economy has lost a substantial number of young potential workers who will never make up the ground they have lost.

In some of my other research I’m exploring the possibility that these younger people may actually be working in the “informal sector” (also called the underground economy or hidden economy). It’s possible that the growth of this sector has absorbed some young people, meaning that the reported LFPR’s are lower than the actual participation rate. At this point I do not know whether I will be able to tease even a preliminary answer out of the data. However, there are good reasons to suspect this might be true.

Consider the Affordable Care Act. This plan fundamentally requires young people to subsidize health insurance for older people. One way to avoid this tax is to not report any income (and therefore not file any tax returns). Working off the books for cash probably looks like a pretty good deal to some of these folks.

One of the fundamental ideas of economics is that if you make an activity more costly, people will perform less of that activity. The explosion of regulations emanating from Washington, D.C. has increased the cost of employment in the formal sector (the parts that produce data that is used to measure GDP and national income). It seems likely that at least a few people have chosen to work outside the formal economy. The real issue, of course, is how many have taken this path.