Wednesday Treasury Secretary Jack Lew announced that a woman’s face will be on a redesigned $10 bill. It’s not clear if Alexander Hamilton’s visage will be replaced. Other possibilities include two faces on the bill or two different versions of the bill (one with Hamilton and another with the selected female).

I’m going to ignore the obvious political reasons for this announcement. But I will say it’s another case of this administration yelling “SQUIRREL‼” when something embarrassing happens. In this case it’s the “hack” of the Office of Personnel Management (OPM). Actually it wasn’t a hack. OPM gave root access to the servers to a contractor working in China.

Back to the point. Dr. Anna Schwartz is well-known among economists. Along with the late Milton Friedman, she co-authored A Monetary History of the United States, 1867–1960. Prof. Friedman was awarded a Nobel Prize in part for his work. To their everlasting discredit the Nobel committee did not see fit to accord Prof. Schwartz the same honor.

I don’t usually rely on Wikipedia but this entry is factually accurate:

Milton Friedman and Anna Schwartz were working at the National Bureau of Economic Research (NBER) when the future chairman of the Federal Reserve, Arthur Burns, suggested that they collaborate on a project to analyze the effect of the money supply on the business cycle. Schwartz was already gathering much of the relevant historical data at that point, while Friedman was already a professor at the University of Chicago and also at the NBER. They began work in the late 1940s and eventually published A Monetary History through Princeton University Press in 1963. The Depression-related chapter “The Great Contraction” was republished as a separate section in 1965

Wikipedia includes this in her biographical sketch:

Schwartz was born Anna Jacobson on November 11, 1915 in New York City to Pauline (née Shainmark) and Hillel Jacobson. She graduated from Barnard College at the age of 18 and gained her master’s degree in economics from Columbia University in 1935, when she was 19. She started her career as a professional economist one year later. In 1936, she married Isaac Schwartz, a financial officer and fellow Columbia University graduate, with whom she raised four children. Her first published paper was in the Review of Economics and Statistics (1940), in which she, along with Arthur Gayer and Isaiah Finkelstein, wrote British Share Prices, 1811–1850. She earned her Ph.D. from Columbia in 1964.

In 1941, she joined the staff of the National Bureau of Economic Research. She worked in the New York City office of that organization from then right up to the time of her death. When she joined the National Bureau, it was engaged in the study of business cycles. Though she held teaching positions for only a short part of her career, she developed younger scholars by her willingness to work with them and to share her approach, a scrupulous examination of the past, so as both to understand it better and to draw lessons for the present.

David Henderson has written a very nice appreciation. Economists will probably enjoy the 1989 appreciation by Karl Brunner and Milton Friedman. 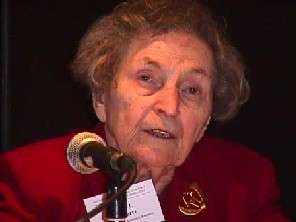 If you can think of a better choice for the $10 bill I’d like to hear it. However, along with others, I believe Dr. Schwartz should share that real estate with Mr. Hamilton.

In Favor of Hamilton

Over at The Federalist, Mollie Z. Hemingway writes “We Don’t Deserve Alexander Hamilton On Our Currency.” The sub-head is “We’ve rejected our founders’ views on self-government, why have them on our money?” Excerpt:

Some in the media are doing wonderful work interrogating the seriousness of the [OPM] breach. But when it comes to many others, they seem curiously incurious about the severity of the problem. On the front page of the Washington Post site as I write this, there is not a single word about this “calamity.” Instead, there’s this: 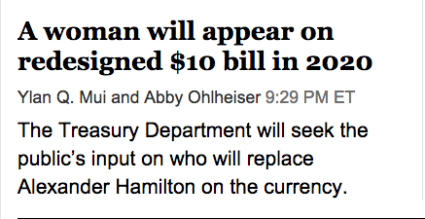 Yes, as the world burns from Ukraine to Iraq to the South China Sea, as we face a catastrophic seizure of data on all of our military and federal personnel, as the country faces real civil unrest and discord, the Obama administration has decided to turn its focus on the “problem” of a great immigrant Founding Father’s presence on our currency.

Robert Tracinski chimes in with “Four Reasons Alexander Hamilton Needs to Stay on Our Money.” Excerpts:

Alexander Hamilton was a classic American immigrant success story. Born in the West Indies, he was orphaned at about 11 years of age. …

Within months of the British withdrawal from America, Hamilton became the founder of the Bank of New York, which today is America’s oldest bank, and he became the central figure in the new nation’s financial center.

Hamilton was the country’s first Secretary of the Treasury under George Washington, and boy did he have a mess to clean up. He convinced the federal government to assume responsibility for the debts of the states, …

I’ll leave you to decide for yourself what he would have thought of $16 trillion in government debt. So maybe there’s a reason today’s Treasury Department doesn’t want to be reminded of him.

3) He was a founding father of Wall Street.

Alexander Hamilton was the first person to have a foot both in the Treasury Department and in Wall Street. Alas, he wasn’t the last to do so. But in that long and inglorious history, he has this distinction: he helped start both of them.

4) He was an early advocate of a central bank.

Alexander Hamilton was one of the first and most influential advocates of an American central bank, the Bank of the United States, that would give the federal government influence over the financial system.