By a lopsided 126-302 vote the House of Representatives removed Trade Assistance Authorization (TAA) from the Trade Promotion Authority (TPA) bill. In this article I’ll discuss the ramifications of this vote as well as the TPA and Trans-Pacific Partnership (TPP). But one thing is clear to me: President Obama does not want this trade bill to reach his desk. This article is about the trade bill and the TAA vote.

Before getting into that, I want to point out some serious dishonesty among TPA opponents. I confess that I fell into this trap for about ten days. Today, doing research for this article, I learned why I was wrong.

Dishonesty Among Those Opposing TPA

A number of those opposing TPA have referred to the Trade in Services Agreement (TiSA). They allege that TiSA is part of TPP. And the issues they raise are scary. “TiSA would allow free migration among member countries.” Nothing like screaming, “Open borders!” to panic folks. “TiSA will regulate the internet.” There is a TiSA annex that covers electronic communications, so maybe that’s correct. But there’s one big gotcha:

TiSA is not part of the TPP. TiSA is a completely different agreement. According to WikiLeaks, there are 50 countries negotiating,[1] far more than the number involved in the TPP.[2] Frankly, this level of deception is scandalous, even by Washington, D.C. standards.

Now back to the TAA vote Friday. Trade Assistance Authorization has become a standard component of any fast-track trade deal. It allocates quite a bit of spending to workers hurt by free trade. Economists agree that reductions in tariffs and other trade barriers will hurt some groups. But the benefits are always greater than the costs, usually much greater. It’s difficult for us to oppose TAA despite the fact that the program is run with the usual federal government inefficiency.

TAA has been added to TPA bills as a sweetener to induce some Democrat votes. Yet 144 House Democrats, including House Minority Leader Nancy Pelosi (D-CA), voted against TAA.  This is a cynical move designed to kill the whole trade bill.  The Senate has already passed a bill including both TPA and TAA.  But the House only passed TPA.  Speaker John Boehner will try another vote on TAA next week. Otherwise, the TPA will be sent back to the Senate for another vote. The TPA-TAA combination barely squeaked through the Senate. My guess is that TPA alone will be defeated. It’s almost impossible to believe Rep. Pelosi came up with this strategy on her own.

Not only did they reject him by the dozens, they were led by party leader Nancy Pelosi of California, who has often expressed deep admiration for the president. She joined in a tactic that even some Democrats called devious and cynical: voting against a favorite job-retraining program in order to imperil the trade package’s main component: “fast track” negotiating authority for Obama.

Mr. Obama has never wanted a trade deal. But, as is so often the case, he talks a good game in public. Here are some of the statements below about Mr. Obama’s meeting with House Democrats. Ask yourself if he would really have used the tactics he employed if he was trying to garner votes.

Deeply cynical, indeed. The TAA was added to the TPA in the Senate to induce reluctant Democrats to vote for the package. The real disgrace is that 158 Republicans also voted to remove TAA. While their votes are understandable and principled, they aren’t helping Speaker John Boehner much. But even if all 158 had switched their votes, the bill would still have come up 18 votes short (16 if Mr. Boehner can track down the two Republicans who did not vote and prevent the four non-voting Democrats from showing up). 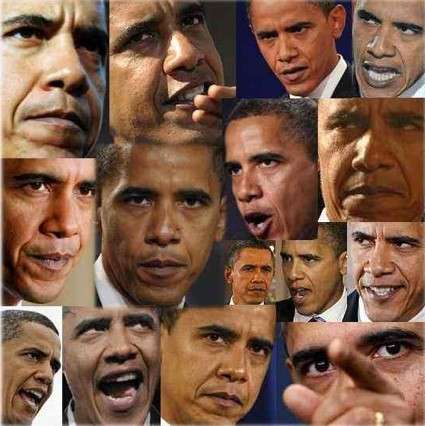 Today Congress was greeted with the many faces of Barack Obama, and apparently none of them were particularly positive or respectful and that has whispers spreading throughout Washington D.C. regarding just how poorly the meetings went between members of both political parties and the President of the United States.

After President Obama met with House Democrats, the long knives came out. Rep. Peter DeFazio (D-OR) was willing to speak on the record:

Obama drew applause when he walked into the morning meeting with Democrats, but sharp words after he left.

‘He’s ignored Congress and disrespected Congress for years,’ he told reporters, ‘and then comes to the caucus and lectures us for 40 minutes about his values and whether or not we’re being honest by using legislative tactics to try and stop something which we believe is a horrible mistake for the United States of America, and questions our integrity. It wasn’t the greatest strategy.’

The really good stuff, however, was posted on the DCWhispers website:

Appalling, abusive, and arrogant are just three of the descriptions that emerged from President Obama’s morning meetings with both Democrat and Republican members of Congress today as he tried in vain to accumulate the needed support for what is being called the “Obamatrade” legislation.

Apparently those meetings did not go well for the president, who lashed out at members of Congress and then left visibly upset over how few were willing to support him.

‘The president was said to be very defensive within minutes of his arrival. He snapped at staff, verbally bullied members of Congress, and finally left openly angry and frustrated. There were lawmakers who in turn felt the president’s abusive and arrogant behavior was appalling. They’ve seen him act out before, but not like this. He was every bit the spoiled little brat.’

The contentious environment was apparently not simply between Barack Obama and Congressional Democrats either, but in fact involved certain influential members of the Democratic Caucus telling Nancy Pelosi if she did not stand up to the president on the trade bill, her time as Minority Leader was over. Pelosi must have taken her own members at their word as she was among those who then told Barack Obama he didn’t have the votes. The president pushed back, Pelosi refused to budge, and the president then got up and walked out, ‘tight lipped and ready to leave.’

‘He despises Congress. He despises the Supreme Court. He despises anyone or anything that doesn’t go along with every demand he has for his own agenda.’

An update on DCWhispers.com claims that Fox News has confirmed many of the claims made in this story.

I do not believe Mr. Obama wants this trade bill to reach his desk. The fact that he no longer has Sen. Reid as Senate Majority Leader to bottle up legislation he doesn’t like creates a problem. Therefore, Mr. Obama has resorted to Chicago-style politics.

The President has a deserved reputation for being prickly and difficult to deal with. But the behavior described here goes well beyond anything reported before. I have very few doubts that his over-the-top behavior was designed to alienate House Democrats. Some are probably smart enough to figure out what the President was doing.

Which brings me to a question that’s bothered me ever since TPA stories started appearing. Are we really expected to believe that, after six years of unwavering loyalty, Rep. Nancy Pelosi (D-CA) and Sen. Harry Reid (D-NV) have now decided to oppose Mr. Obama? I might believe that about one of them. But not both. Mr. Obama is playing a double game. And, as usual, the media have no clue about it.

A few months ago I predicted the TPA would never reach the Oval Office. I stand by that prediction.

One Reply to “The Trade Bill and the TAA Vote”