I finally understand the thinking behind the Fed’s activities trying to raise interest rates.  Prof. Ray Fair (Yale) was kind enough to explain this in words of one syllable.  The Fed believes that raising interest rates paid on reserves will induce banks to sell Treasury securities so they will have more reserves.  Treasury security prices fall, interest rates rise, voila.

Utter nonsense.  I once respected the Fed’s economists.  No more.  Here’s why.

The Fed is assuming the banks will sell Treasury securities.  Why?  There are many other assets banks can sell if they want to increase their reserve deposits.  In principle, those asset sales should push up interest rates.  While I could draw a link between CDO prices and market interest rates, that seems kind of pointless.

But the real problem is that the Fed has not understood why banks are holding all those reserves.  There are two reasons.  First, there is incredible risk aversion caused by the random, frequent regulations and lawsuits emanating from the Obama administration.  Second, there is the small matter of loan demand.  Banks are holding reserves because they don’t see demand for loans whose return is worth the risk.  The only way loan demand will increase is for the economy to ascend to a decent growth rate.  Until that happens, the Fed should just give up.

For those looking for evidence, I offer the Treasury yield curve between December 17, 2015 and January 14, 2016.  Sure doesn’t look like interest rates are rising. 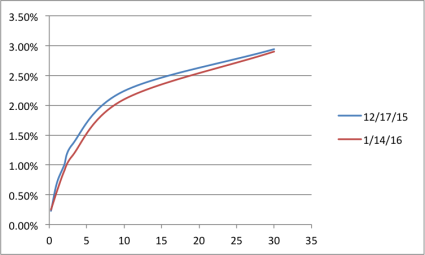