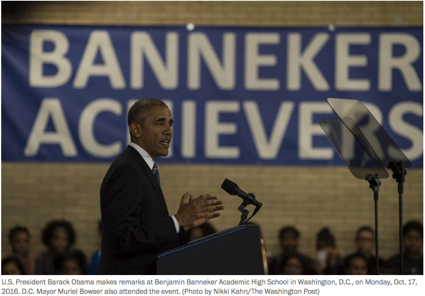 President Obama spiked another football today when he announced that the U.S. high school graduation rate set a new record at 83 percent. Wow!!! But even the fawning media managed to notice that there were, well, a few problems. After all, in a government bureaucracy that cooperates with a union, the easiest way to increase graduation rates is to lower standards for graduation! And, sure enough, that’s what happened.

Pity poor Michael Cohen. He is the president of Achieve, an organization that advocates for higher graduation standards. Interviewed by NPR correspondent Corey Turner, here’s what they say about that 83 percent number:

… roughly half of states now offer multiple diplomas. Some are rigorous, but some aren’t. Also in many places, he says the high school graduation exam is a really low bar. Some states have dropped it altogether. Scores on the test known as the Nation’s Report Card suggest Cohen’s concerns are well-founded. Last year, high school seniors scored on average lower in reading than they did in 1992.

When the NPR Ed team with member stations investigated state graduation rates, they found widespread evidence of low expectations, including students allowed to make up credits by doing less rigorous coursework in less time on the computer. And in Chicago, thousands of dropouts were being mislabeled, never counting against the city’s graduation rate.

In addition, federal efforts to improve graduation rates have helped pressure many schools to show gains, and some education experts worry that some schools are granting diplomas to students who lack the skills they need to succeed after high school.

According to the National Assessment of Educational Progress, known as the “Nation’s Report Card,” high school students have not shown academic progress in recent years: In 2015, high school seniors posted lower scores in reading than they did in 1992, and their math scores were unchanged across the past decade. That same year, fourth- and eighth-graders lost ground on the NAEP math exam, the first declines since the federal government began administering the exam in 1990.

“Certainly we share the concern that we have more work to do to ensure that every student is ready for what’s next,” he said. But “overall, the evidence is clear that students who have a high school diploma do better in the 21st Century economy than students who don’t. So having a higher graduation rate is meaningful progress.”

I am now fully retired after teaching in the California State University system for 37 years. During that time I witnessed a steady decrease in my students’ abilities in math, reading, and writing. (But they sure had a lot of self-confidence – mostly unwarranted.) And, as I predicted a few years back, the next step is already underway: lowered standards for a college degree. Someday soon everyone will have a Ph.D., but it will be worthless unless it’s from Harvard, Stanford or MIT.