[Update June 25: I had forgotten about the Little Pink House, Susette Kelo’s former residence in New London.  They have a Twitter feed @LPHmovie and a Facebook page https://www.facebook.com/littlepinkhousemovie . Below are two posts from their Twitter feed commenting on the most recent property rights travesty.] 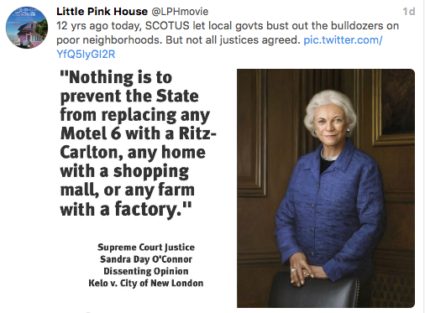 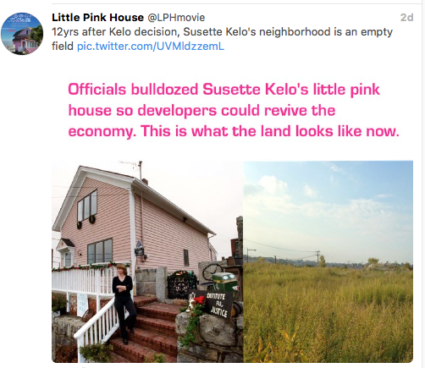 [Now back to the original article.] 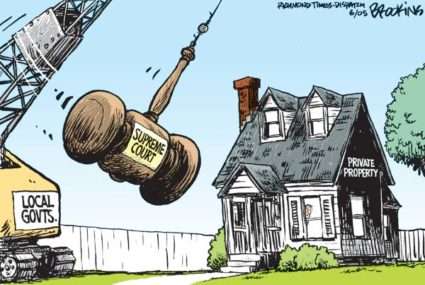 Today the Supreme Court ruled (5-3) that it’s OK for state and local governments to impose ex post facto restrictions on the ability of property owners to add value to their property. This is another nail in the coffin of property rights. From USA Today:

The U.S. Supreme Court on Friday upheld Wisconsin court rulings the owners of a family cottage were not entitled to compensation over development regulations that bar the sale of the family’s adjacent lot.

The Murrs wanted to sell the lot to finance an upgrade to the cottage their parents built 56 years ago, and argued that St. Croix County, Wis., has essentially taken their land through strict shoreline development and conservation rules and should pay just compensation for that loss under the Fifth Amendment.

The section referenced from the Fifth Amendment is that private property should not be taken for public use without just compensation.

But St. Croix County and Wisconsin say that the family’s two adjacent parcels, taken together, would easily accommodate a single modern home, and so they have not really lost any value. The government also noted that the original owners were aware of the development restrictions when they sold the lots to their children.

At least they’re consistent. They meted out the same sort of justice that Susette Kelo received. The government owns everything. We are allowed to use it only if said government gives us permission. (If you’re not familiar with Kelo v. New London, click here for a link to the Wikipedia page.)

Over the years, the “takings” clause has been narrowly interpreted so that it only applies to actual money takings. Loss in property value or other “paper” losses do not qualify. My lovely wife and I have been victimized by local zoning laws. I won’t go into details but we are now part of a “one story overlay” zoning district. A Harvard lawyer who worked with us to oppose this regulation noted, “Of course it’s a taking. But that’s not what the courts say.”

Ultimately judges get paid by the government. As any economist will tell you, when someone pays you, they expect favors in return. Or maybe that was The Godfather.