Naturally, these are being floated as part of the tax reform effort. Politico has summarized the proposals being kicked around. You can read more there. And Dan McLaughlin, attorney and columnist for the National Review Online, has written briefly about one of these proposals. (In fact, it was Dan’s column that alerted me to the potential problem.)

But here are two of the many ideas floated in the Politico article.

One idea quietly being discussed would be taxing the money that workers place into their 401(k) savings plans up front: an idea that would raise billions of dollars in the short-term and is pulled from the Camp plan. This policy idea is widely disliked by budget hawks, who consider it a gimmick; the financial services industry that handles retirement savings; and nonprofits that try to encourage Americans to save.

Among the decisions that the White House, Treasury and congressional leaders have settled on is that any tax proposal will require U.S. companies to bring back earnings from overseas at a one-time low tax rate, a favorite proposal of the business community known as repatriation.

I’ll discuss these proposals in order.

It happens you can already make retirement contributions out of taxed income. The Roth IRA allows you to make contributions out of after-tax income. You get no tax deduction in the year you contribute. But you are allowed to withdraw when you retire and pay zero taxes. To summarize, contributions to Roth are from after-tax income, while withdrawals are tax-free. Contributions to conventional IRAs are from before-tax income, but withdrawals are taxed as ordinary income. (Rollover IRAs are accounts created when a balance is transferred from, say, a 401(k) account. Employers sometimes require this, especially for employees who no longer work at the firm.) Also, some households hold more than one type of IRA.

But this proposal is different. It would essentially mandate that contributions to 401(k) plans be made out of after-tax income. (Presumably, the 403(b) plans used by academics would also be included.) This is a terrible idea for a number of reasons. First, as Dan McLaughlin noted,

While the overall goal of cutting business and investment taxes by lowering the corporate tax rate is a good one, much of the pro-growth benefit of reducing business taxes will be kneecapped if the budget bean-counters get away with slapping additional taxes on money invested in 401(k)s, many of which flow into investments in the same corporations getting the tax cut. Taxing individual retirement savings is also bad from the standpoint of conservative economic philosophy, because it discourages self-reliance. It would unsettle plans made in reliance on the existing code by lots of people – not a reason to freeze the code in amber, but certainly a caution for anyone monkeying with the rules. And as an electoral matter, it’s likely to be politically radioactive with precisely the sorts of wavering suburban voters who were staunch Republicans during the Obama years but are uncomfortable with Trump.

Second, economists have complained for decades that Americans don’t save enough. And it’s true. In the second quarter of 2017 household saving was 5.4% of gross national income (GNI).[1] The last thing we need is to remove an incentive to save. But that’s exactly what this proposal would do.

Finally, there’s political risk. Roth IRAs essentially create tax revenue for the government today. But future tax revenue will be lower when retirees withdraw funds tax-free. Future Congresses are likely to be unhappy with this. What today’s Congress has done any future Congress can undo. It’s entirely possible that a future Congress could revoke the tax exemption for withdrawals.[2] This explains something that has puzzled many economists and investment advisers. If you believe the government’s promise, no one with an ounce of understanding of economics would ever choose a conventional IRA over a Roth IRA. Yet Roth IRAs have not been very popular. To see this, we can compare the demand for Roth and conventional IRA accounts.

The Employee Benefit Research Institute publishes data on IRA holdings (among many, many other topics). Their latest data is from 2013.[3] And there are two measures: the percentage of households holding each type of IRA and the percentage of assets held in each.

Looking first at the percentage of households, conventional IRAs were 34.5% of the market, Roth IRAs were 20.5%, and rollover IRAs were 21.0%. The remaining 24% of households held two or all three. 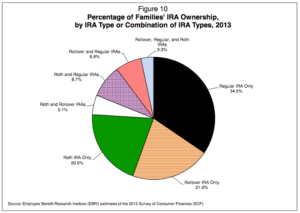 The market share by percentage of asset valuess shows conventional IRAs were 26.6%, Roth IRAs were 5.7% and rollover IRAs were 19.8%. Again, the remaining 47.9% of total assets were allocated to two or all three. 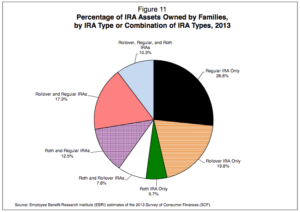 Where to begin? The first objection is that corporations would be required to repatriate funds held in other countries. This sounds more like Socialism than capitalism. The government will actually order businesses to return those funds?

But even worse, this is a one-time offer at a lower tax rate. Corporations have already paid taxes on those earnings in other countries. The correct U.S. tax rate would match what other countries charge: 0.00%.

Finally, it’s temporary. As economists once knew, temporary tax changes do not change long-run behavior. Even if these funds are repatriated, the deadline for this deal will pass and corporations will once again begin to accumulate funds in other countries. Sadly, this is typical of the short-sighted “thinking” in Washington, D.C. Whoever dreamed up this idea should be booted out of the meetings discussing tax reform.

Over the past 30 years I’ve positively dreaded the idea that the tax system would be overhauled again. When Congress opens up the tax code for any serious rewriting, you can bet the farm that the code will not get any simpler. As I’ve written many times before, Congress and the President use tax complication to hide the many favors they dispense to favored interest groups. Sadly, it appears that we may be in for another 5,000 pages added to U.S. tax law.

[2] I once used this example in an MBA finance class. One of the students exclaimed, “They [Congress] would never do that!” He became more cynical as the course progressed.