Three dead in national park system accidents as shutdown wears on[!!] That was the screaming headline in the Washington Post January 5, 2019.

Reviewing my older material I realized that I missed this one.  Three people died in national parks during the government shutdown between December 21, 2018 and January 5, 2019.  The story got major play in the national press.  I’m going to pick on the Washington Post because their coverage was lurid enough to be worthy of a tabloid.

Three days after most of the federal workforce was furloughed on Dec. 21, a 14-year-old girl fell 700 feet to her death at the Horseshoe Bend Overlook, part of the Glen Canyon Recreation Area in Arizona. The following day, Christmas, a man died at Yosemite National Park in California after suffering a head injury in a fall. On Dec. 27, a woman was killed by a falling tree at Great Smoky Mountains National Park, which straddles the borders of North Carolina and Tennessee.

Now any death is a tragedy.  But were these three really caused by the government shutdown?  That’s what the Washington Post and many other outlets implied.  Curiously, that newspaper failed to consult their own archive. On August 12, 2015 they published a study of why people die in U.S. national parks.  (The entertaining title is “”Forget bears: Here’s what really kills people at national parks.”)  The piece begins by noting that national parks are actually pretty safe places.

I mean technically, you might. But the odds of it happening are really, really, low. Somewhere between 120 and 140 people typically die at national parks each year, not counting suicides, according to numbers maintained by the National Park Service. That may sound like a lot, but consider that roughly 280 million people visit the parks each year. That means that if you go to a national park, your odds of dying there are roughly 1 in 2 million.

Followed by this nifty graph. 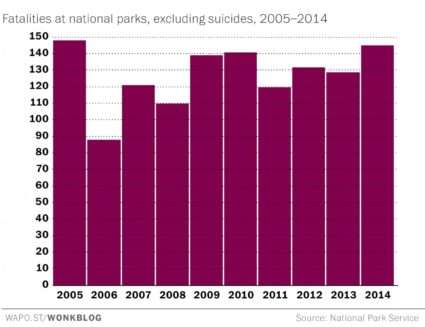 So let’s  do a little math.  Between 2005 and 2014 the average number of deaths per year in national parks was 127.  That works out to an average of 0.35 deaths per day.  (Yes, I accounted for leap years.)  The government shutdown had been in effect for 15 days, implying an expected number of deaths of 0.35 x 15 = 5.2165.  The actual number was 3.  Apparently the government shutdown made the national parks safer.  (Admittedly, another contributing factor is lower daily attendance during the shutdown.)