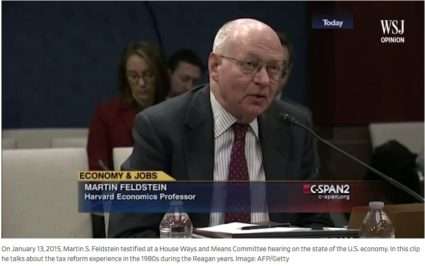 On June 11 Prof. Marty Feldstein passed away.  Prof. Larry Summers penned an appreciation in the June 12 Wall Street Journal.  In doing so he inadvertently solved a mystery that has persisted since 1973.

In the summer of 1973, preparing to enter the Stanford Ph.D. program I worked at Data Resources, Inc. (where I had worked for a year before deciding to take some time off before pursuing a Ph.D. in economics).  Prof. Otto Eckstein, founder and president of DRI, was at Harvard as was Prof. Bob Hall.  There were many connections between DRI and the Harvard economics department.

One day someone brought in a story.  Marty was doing research on social security.  Remember, those were the days when one submitted data and programming for statistical analysis to the mainframe computer operators.  The results were available the following morning.

Marty’s research assistant brought him the results of the latest statistical analysis.  They were mystifying with signs of coefficients the opposite of what was expected, some obvious variables failing the statistical significance tests, and so on.  Marty stared at these results for a week.  He had just about finished coming up with a story to explain the results when his RA shamefacedly admitted that he had accidentally transposed the data matrix.  Meaning Marty had spent a week interpreting gibberish.

Now we know the identity of that RA.  Kudos to Mr. Summers for finally owning up to his mistake.  And mad props to the late Mr. Feldstein for having the patience and sense of humor to put up with mistakes by his young RA.  We have all made similar errors during our careers.