[A pdf version is available for downloading at the end of this article.]

AB 1460 would require California State University students to complete an ethnic studies class prior to graduation.  This bill has passed the assembly. As of August 30, 2019, the bill is in the state Senate Appropriations Committee.  It has been placed in a suspense file awaiting fiscal analysis.  Note that some bills never make it out of suspense. They are left to die there.[i] The purpose of this article is to explain why AB 1460 should never become law. It is just what the CSU needs: mandatory ethnic studies 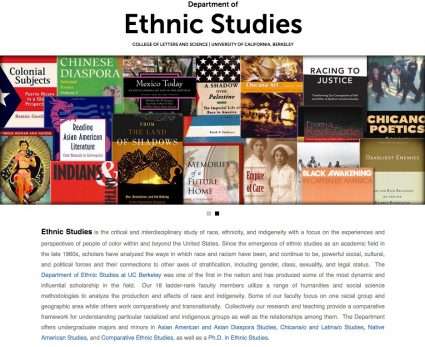 On May 23 the California Assembly passed AB 1460, a law that would require California State University (CSU) students to complete an ethnic studies class prior to  graduation. The bill is now under consideration by the state Senate.[ii]  This bill is sponsored by the California Faculty Association, the union that represents faculty in the CSU system.

This is a terrible idea. Today many CSU campuses are admitting students who are not prepared for college. The last thing the students need is three more semester units taken up by a state-mandated course that was explicitly designed to increase the number of faculty in ethnic studies. It also expands the membership rolls of the CFA. As it happens, this is really not necessary. Ethnic studies departments have increased the number of faculty. In addition, the number of ethnic studies departments has increased.[iii] But for the system as a whole, the number of tenure-eligible faculty has actually decreased.[iv] Finally, this requirement may crowd out another course a student needs to graduate.  For example, it may displace an accounting course from a business degree.  Or a quantum theory class from a physics degree.

The beginnings of this movement actually go back to a bill vetoed by former governor Jerry Brown in 2016.  That law would have mandated ethnic studies courses in high schools. San Francisco and a few other districts have implemented this idea on their own.  But the intent is clear. California’s public high schools produced 429,560 graduates in 2017.[v]  The total undergraduate enrollment in the CSU as of fall, 2017 was 429,776.  Of that number, 279,961 were juniors or seniors.[vi]  Requiring ethnic studies in high schools would increase demand for teachers in that field by about three times as many as requiring the course in CSU universities.

CSU Chancellor Timothy P. White made no secret of this fact.  In his 2017 letter to the chair of the California State University Task Force on the Advancement of Ethnic Studies, he wrote, “In the pages of this status report, you will see examples of our campuses’ commitment to growing and strengthening ethnic studies to ensure students, faculty and the larger campus community benefit from these important programs. From 2015-16 to 2016-17, the number of faculty hires in ethnic studies departments and disciplines systemwide more than doubled, and more students are enrolling in ethnic studies courses and pursuing majors in these fields.”[vii]

Note the name of the task force.  Why bother even doing a study if the name of your group says you are to advance the field?  Here’s what the executive summary said about key findings: “1) There is wide-ranging and varied support for the sustainment and advancement of ethnic studies. 2) Student interest in ethnic studies has grown while resources have decreased. 3) Resources have decreased disproportionately for ethnic studies. 4) Ethnic studies faculty report they spend more time interacting with students, an assertion which is supported by a comprehensive national study.”

There’s a contradiction hidden in there.  If there is high student interest in the field, enrollment should be increasing.  One immutable fact about the CSU system is that the full-time equivalent enrollment (FTE) drives almost all budgeting decisions.  If enrollment increases persistently in a subject matter area, that field will get a larger budget and be able to hire more faculty.  Yet “resources have decreased.”  Allow me to translate. The number of faculty in ethnic studies departments has fallen. (Which turns out to be false.  More on that later.) We need to find a way to boost that number.  The reasons why run the gamut from vague to downright silly. For example, “On some campuses ethnic studies faculty often comprise the majority of faculty of color from the four traditionally disenfranchised ethnic groups in the United States. These ethnic studies faculty often have the additional expectation of serving on campus committees to diversify the composition of the committee creating a demand for service that faculty in traditional departments do not have.”[viii]

There is actually a simple solution to the problem of excessive committee assignments.  Faculty are allowed to refuse to serve beyond a minimum annual expectation.  In point of fact, in some CSU departments faculty committee work is valued at least as much as teaching and publishing.  A general rule is that faculty who do not publish serve on committees and have other administrative assignments.

The main complaint seems to be a lack of hiring and inability to expand.  Fortunately, the survey includes detailed information about faculty.  Between the two comparison years the number of tenure-track faculty increased by 10.7%.[x]  However, for the CSU system the number of faculty fell by 8.4%.[xi]  In other words, ethnic studies grew while some other departments shrank.  And the disparity with lecturers is even larger.  For ethnic studies, the number of full and part time lecturers rose by 74.1%.  Systemwide, the growth was 27.0%.  Ethnic studies has seen a larger increase in faculty than the average CSU department.

Lecturers are important because they are represented by CFA.  Both categories of lecturers can get de facto tenure in the form of a three-year appointment.  This occurs after six years of service (one semester or two quarters per year).  The CFA was a huge factor is lobbying for lecturer rights in the CSU system.  I know.  I was on several faculty committees that debated this issue, eventually passing resolutions and other items supporting lecturer rights.

But the conclusion is inevitable.  No matter how you slice and dice the data, the number of faculty teaching ethnic studies has increased more than the typical CSU department.  The argument that these faculty are underrepresented is nothing more than a straw person.

This bill will extend the decline in K-12 academic performance in California. Every few years the U.S. Department of Education’s National Assessment of Educational Progress publishes the Nation’s Report Card.[xiii]  It includes a ranking of states by performance in subject matter areas such as mathematics, reading, writing, and science.  Using standardized tests makes the data comparable both over time and among states.

Let’s start with mathematics. In 1992 California’s eighth graders ranked 29th in the country.  By 2015 the state had dropped to 44th place. (I chose eighth grade because more states were reporting for that grade than 12th grade.)

But it’s science where the California K-12 public school system really fails.  In 1996 the state ranked 37th. That may not sound too bad until you realize only 41 states submitted results for that year. Unbelievably, things deteriorated by 2015 with California finishing 43rd out of 46 states reporting.

Only reading showed an improvement. In 1998 California was ranked 32nd out of 37 states. By 2015 the state was in 38th place. But in 2015 all 50 states and the District of Columbia reported so California moved up slightly in percentage terms.

One problem complying with AB 1460 will be a lack of faculty. But creating jobs for Ph.D.’s in various ethnic studies fields was part of the motivation behind its introduction. Ethnic studies, according to the National Center for Education Statistics, includes “[any] program that focuses on the interdisciplinary and comparative study of the history, sociology, politics, culture, and economics of North American racial and ethnic groups, including African Americans, American Indians/Native Americans, Hispanic Americans, and Asian Americans.”[xiv]

According to the National Center for Education Statistics between 1970 and 2010 there were between 143 and 278 Ph.D.’s awarded in “Area, ethnic, cultural, gender, and group studies” each year.[xvi]  Between 1970 and 2011, there was a total of 3,704 degrees awarded. To put this in perspective there were 429,268 undergraduate students enrolled in the 23 CSU colleges in the fall of 2017.[xvii] That means roughly 107,317 students each year will take this course.  Assuming each faculty member in the field teaches two sections of 65 students each per semester, a whopping 826 faculty members will be required to teach this course alone.  (In the unlikely event that the universities can persuade these faculty to teach four sections a year, that figure drops to a mere 413.) In the fall of 2018 the CSU employed 27,000 faculty of which 13,000 were full-time.[xviii]  Hiring several hundred new faculty in Ethnic Studies will inevitably displace hires for other departments. I suspect the required Ethnic Studies course will be staffed mainly by part-time faculty who hold MA degrees in the field.

I taught economics at CSU East Bay for 37 years. I watched the quality of incoming freshmen decline.  The CSU is doing their best to compensate for this trend.  But the last thing CSU campuses need is another mandate from the legislature to consume three more units of an undergraduate’s time.  Indeed, some of the more intensive majors have no room left for this requirement unless it replaces a course in the general educatio

[vii] The California State University, “Status Report on Campus Responses to Recommendations by the CSU Task Force on the Advancement of Ethnic Studies” November 2017 p. i. Available at https://www2.calstate.edu/impact-of-the-csu/diversity/advancement-of-ethnic-studies/Documents/Ethnic-Studies-Status-Report-Nov-2017.pdf. Accessed June 29, 2019.

[xiii] U.S. Department of Education, National Assessment of Educational Progress, “The Nation’s Report Card.”  Available at https://www.nationsreportcard.gov/profiles/stateprofile?chort=2&sub=MAT&sj=AL&sfj=NP&st=AP&year=2013R3. Accessed June 23, 2019.  All data in this section is from that source.

Just What the CSU Needs