Why? That was the first question that came to mind when the war on vaping began to heat up. I decided to take the excellent advice given by Deep Throat to Bob Woodward and Carl Bernstein: “Follow the money.” The three main culprits are government, big tobacco, and big pharma.

(A pdf version of this article can be downloaded at the bottom of the page.  However, it does not include the state-by-state tobacco settlement payments graph mainly because the graph would have been unreadable.)

[Updated January 17, 2019 after suggestions from an anonymous reader.]

As always, the real question is, “Safe compared to what?” There seems little doubt that vaping using products sold be legitimate companies is safer than cigarettes. Consider the chemical composition of the two products (Figure 1).[1] 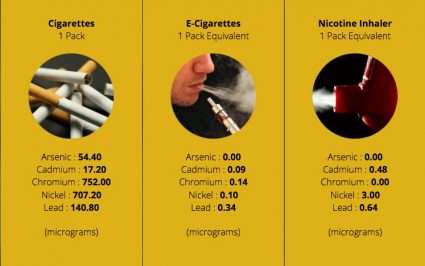 Arsenic is poisonous. Cadmium, chromium, nickel, and lead are heavy metals that accumulate in the kidneys and will eventually cause kidney failure. Somehow that seems more serious compared to e-cigarettes and nicotine inhalers. This is amplified by the quantities of the chemicals.

Tar, formaldehyde, and diacetyl are also present in cigarette smoke. They are completely absent from e-cigarettes. There seems little doubt that vaping products are far safer than cigarettes.

A reasonable response to the vape scare would do three things: first, proceed with the current investigation; second, impose clear and enforceable regulations on all kinds of vape cartridges and liquids; and, third, do more to prevent underage vaping without overbroad bans that penalize responsible adult vapers making the switch from cigarettes.

That means rejecting the hysteria against all forms of vaping, which activists are using to mobilize sweeping bans against the whole technology.

The bottom line is that officials should not ignore how well-regulated vaping has dramatically reduced sickness and death from cigarette smoking. As alarming as today’s health scare is, a puritanical approach to vapes is very unlikely to serve the public interest.

So let’s see who’s behind the war on vaping.[3]

In 2018 federal, state and local governments in the U.S. collected $41 billion in revenue from tobacco-related sources. This total does not include sales tax revenue. Let’s look at the details of the sources of this revenue tsunami.

In 2018 the states collected a total of $7.9 billion dollars as part of the 1998 tobacco Master Settlement Agreement.[4] Total payments (including the territories) were $8.2 billion. Since the first payments in 1998, tobacco companies have paid the states $154 billion dollars.[5] Figure 2 shows the annual payments since 1998.[6] 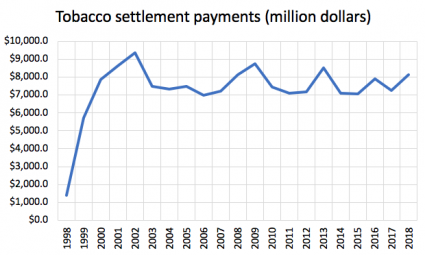 The breakdown by state is interesting. In 2018 California collected $876 million. American Samoa, Guam, and the Virgin Islands collected $1 million each, while the Northern Mariana Islands collected $0 (probably rounded from a number less than $0.5 million). Puerto Rico received $77 million.[7]

However, settlement payments are made according to a schedule and do not depend on revenue, profit, or any other measure of business success. The California Attorney General has a good summary of the details, including this:[8]

In 2015 California spent $75 million on an anti-vaping public relations campaign. More on that shortly.

If anything, the settlement terms give state governments even more incentive to support big tobacco. After all, if one of the firms goes out of business, their “contributions” to the settlement payments will be greatly reduced. Governments are undoubtedly very afraid of this possibility. There is a powerful incentive to keep big tobacco in business and profitable.

Bankruptcy is a binary choice. Either the business is a going concern or it’s bankrupt. By contrast, loss of excise and sales tax revenue occurs at the margin. That means there is both a long-run incentive (preservation of settlement payments) and a short-run incentive (preventing excise taxes from declining) for governments to support big tobacco.

Figure 3 shows how excise tax revenue has grown since 1990. 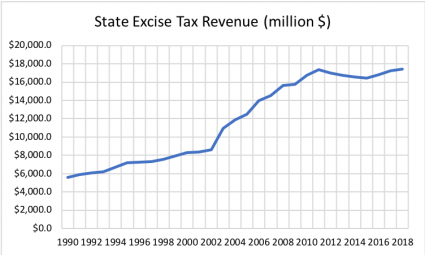 This is undoubtedly getting the attention of the federal and state bureaucracies. Little wonder that the state and federal governments are suddenly opposed to vaping. As is so often the case, California gives us a good case study.

In 2015 the California Department of Public Health (CADPH) issued a request for proposal for a $75 million grant to create a public relations campaign against vaping products.[11] Figure 4 shows a slide from one presentation (emphasis added).[12] 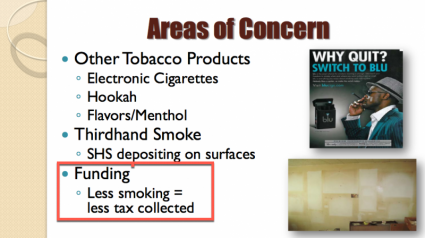 Figure 4 California is concerned about the loss of tax revenue.

The anti-vaping push mainly comes from progressives and Democrats. Republicans and conservatives tend to favor allowing individual choice. California Representative Duncan Hunter (R) has emerged as a leader in the anti-anti-vaping effort. In a 2015 op-ed, he wrote[13]

The reason I vape is simple: It’s so I don’t smoke cigarettes.  I vape knowing that I’m not inhaling tobacco.  Most importantly, I vape because I believe it could save my life.

This is seemingly obvious, but there is a subtle catch. Big tobacco actually tried to enter the vaping market. Blu, owned by Imperial Tobacco; MarkTen, owned by Altria Group; and VUSE, owned by R.J Reynolds. But their products had a critical flaw: they tasted like cigarettes (known in the industry as cig-a-likes).

One example is the Mig Cig Basic E-Cig Starter Kit. This unit was rated number 1 by Vaping Daily. Figure 5 shows some advertising for this product. The delivery system resembles a cigarette. People who took up vaping to quit cigarettes have not been fans of a product that makes it look like they’re smoking. 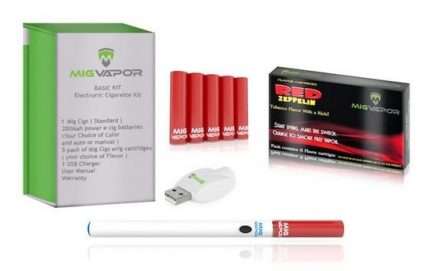 Brian May of Altria noted that the company, “did support FDA extension of authority over e-cigarettes and other tobacco products.”[14]

The pharmaceutical industry is a distant third in culpability. Undoubtedly their sales of nicotine gum and other stop smoking products have declined a bit as demand has shifted to vaping. And big pharma donates vast quantities to political campaigns. But it’s difficult to find a direct connection between pharma companies and anti-vaping activities. After all, products like nicotine gum are a small fraction of their overall business.[15]

In 2019 MedConsumers.com published their list of the 10 Best Nicotine Gums 2019.[16] Five out of the top six are Nicorette products. (Nicotrol is the lone intruder. But that drug is just relabeled Nicorette.[17]) Nicorette is manufactured and distributed by GlaxoSmithKline (GSK) in the U.S.[18] From the company’s financial statements it’s impossible to extract how important Nicorette is to GSK. The company reports three lines of business: pharmaceuticals, vaccines, and consumer healthcare. Nicorette is included in the third category. In 2018 consumer healthcare was about 25 percent of total revenue (called “turnover” under the U.K. accounting system).[19] GSK is a very large company. 2018 gross revenue was £30.8 billion (about $39.8 billion). It’s unlikely that the company would spend very much defending a market that is probably a tiny part of their overall financial picture. But GSK will spend a bit defending this market just because they have significant market power and some control over pricing.

One company whose product did not make this list is Pfizer. That’s because Chantrix is actually a pill, available by prescription only.[20] Naturally, many health insurance companies will pay for this prescription with a small, perhaps zero, copay. In 2017 Chantrix sales were $997 million.[21] Pfizer certainly has a powerful incentive to oppose vaping.

Vaping is almost certainly safer than smoking cigarettes. But federal and state governments continue to harass the industry. The state of California has admitted that part of their incentive is to preserve their excise tax revenue stream. But an even bigger fear is possible company bankruptcies. In that case, the tobacco settlement payments would fall under the jurisdiction of a bankruptcy judge. Government has both short and long run worries.

Big tobacco is, naturally, worried. More vapers means fewer smokers. Fewer smokers mean lower revenue and profits. Their attempts to enter the vaping industry have fallen flat. One possibility is acquisition. Expect big tobacco to go on a shopping spree for established vaping companies once the campaign against vaping fails.

Big pharma is undoubtedly also concerned, but at a level several orders of magnitude lower than governments and big tobacco. To the extent that vaping replaced nicotine gum and other products used to help people quit smoking, revenues will be reduced. One potentially important factor is GlaxoSmithKline’s monopoly power in the nicotine gum market. GSK may put up a fight to defend their market power.

But this is not an anti-vaping populist uprising. The motivating forces come from government, big tobacco, and big pharma.

The Dirty Secret Behind the AntiVaping Movement for pdf