Over on Twitter, Carl T. Bergstrom started a thread that quickly morphed into multiple takes. Before proceeding any further, here’s a list of those who contributed directly to the graphics below. Mr. Bergstrom’s complete thread is at the end as a pdf file (thanks again to threadreaderapp).

Mr. Bergstrom kicked off the thread with Figure 1. The idea here is actually pretty straightforward.

There are two competing hypotheses about the best way to fight the virus.  The first says, “Let it spread quickly and get this over.”  The second is, “Take protective measures to limit the spread of the virus.”  The constraint is the capacity of hospitals.  One possible outcome (the best case scenario) is that using protective measures means there is enough hospital space to accommodate all the victims.  But if we let COVID-19 spread quickly, there would not be enough hospital beds to accommodate everyone.  In this case, the better strategy is to take protective measures. 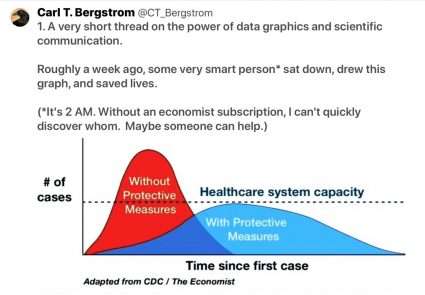 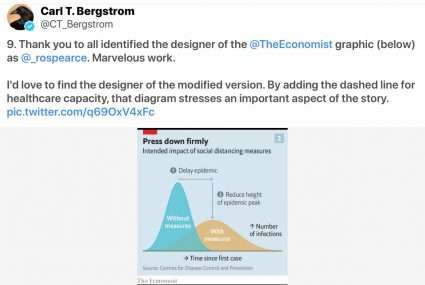 David Giesbrecht used an R script and the ggpubr library to parameterize the model (Figure 3). 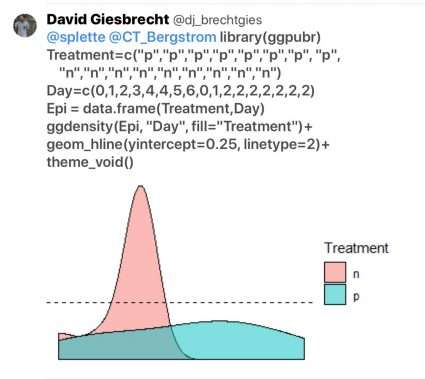 Thomas Splettstößer produced another variant of the mode (Figure 4)l. 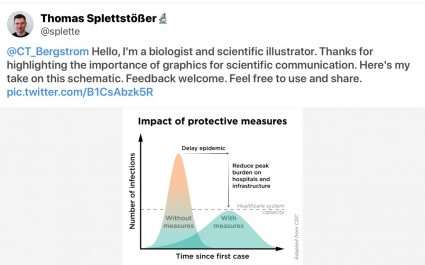 There’s one example missing from these graphs (although I’m pretty sure I saw it in one of the branches off the thread). The peak of the “With Protective Measures” curve may be above or below the system capacity. There is still a possibility of a shortage of hospital capacity. The best we can say is that using protective measures will create less damage than not taking protective measures. Figure 5 shows one possibility.