The Iowa caucuses were a disaster for Democrats. Their smartphone app, developed by Shadow, Inc., crashed and burned. Nevada fared somewhat better because they gave up on the app and went to a backup plan. Those who regard these as one-off disasters do not understand the underlying cause: the Democrats’ slavish devotion to identity politics has blinded them to the far more important factor, competence.

A Bit of History

A quick review of history is in order. Recall the Healthcare.gov rollout. A bunch of different program modules were slapped together at the last minute and put into operation with no testing. Interestingly, the Iowa Democrat app was not tested either. There was also apparently no training given to caucus chairs.

That brings to mind the Office of Personnel Management (OPM) hack, far more serious than the ObamaCare rollout.. OPM is the human resources agency for the civilian part of the federal government. The hack exposed as many as 4 million detailed personnel records.[1] These are detailed records including the Standard Form 86 (SF86). According to the Navy Times,[2]

“They got everyone’s SF-86,” one Pentagon official familiar with the investigation told Military Times.

The SF-86, a 127-page document, asks government employees to disclose information about family members, friends and past employment as well as details on alcohol and drug use, mental illness, credit ratings, bankruptcies, arrest records and court actions.

As John Schindler noted, however, many non-civilian employees may have been included in the records.[3] He points out that many covert operatives work under false identities (“covers”). These identities must be credible, backed with documentation. Hence the cover may well include an SF-86 or other official civilian certification. Thus even some non-civilians were probably part of the OPM breach.

The Underlying Cause of These Failures

The Democrat party is now the party of identity politics and intersectionality. They have pressured businesses to adopt their views as a hiring model. They have had some successes, but many more failures. Businesses in highly competitive industries simply cannot afford unproductive employees. They must hire the best people they can get at a wage they can afford to pay.

But politics is not business. For nearly a decade, Democrats have made their political hiring decisions based in good part on identity and intersectionality. Competence has been a secondary consideration. Former President Obama staffed the top three or four levels of every single federal agency with people whose only qualification is loyalty to him. That led to the failed launch of ObamaCare, the OPM intrusion, and the Iowa app failure.

Late reporting by Motherboard[4] revealed that the app was not sent out through the app stores of either Google or Apple. In the Apple universe, that’s a big no-no. Since the app was for private use, Apple probably doesn’t care very much. But it’s even worse. Motherboard reports that the rollout of the app was “haphazard and irresponsible.” Failure was almost guaranteed. Among other issues, there was no organized beta testing. Shadow, Inc. pushed out a new build just two days before the caucuses. At that point, any responsible developer would have told the client to use their backup system instead of simply releasing the app.

The brave folks at Motherboard downloaded and installed the app on two Android phones. On one the app failed to launch, a 50 percent complete failure rate. While that’s an admittedly small sample, the failure itself is about as serious as software glitches can get. 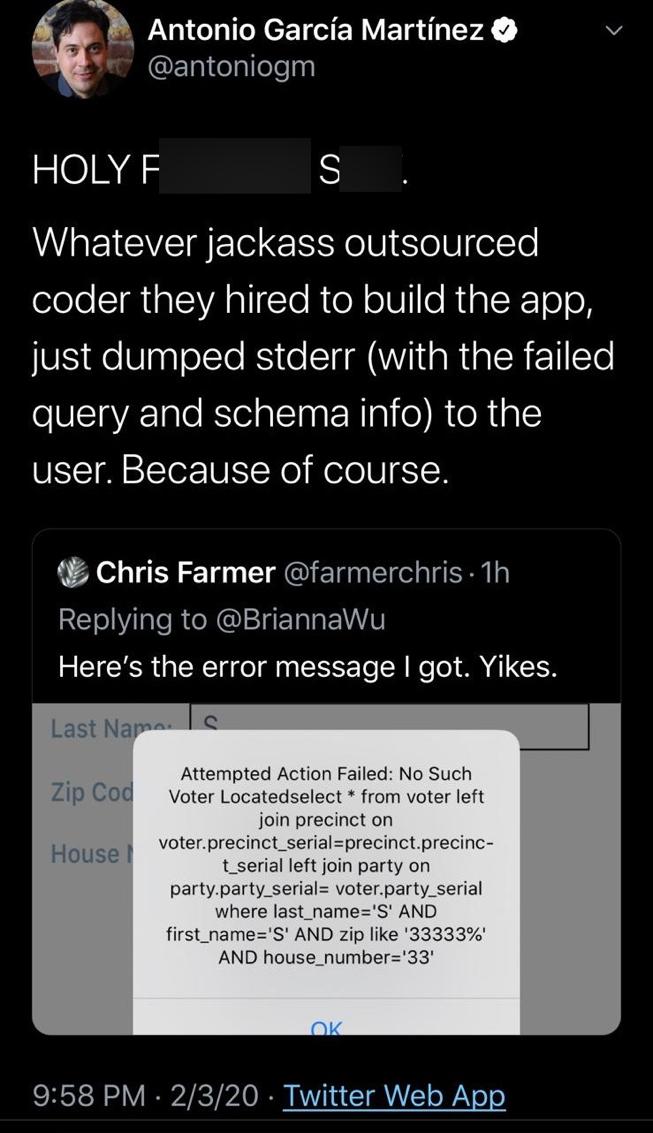 For all you non-techno-geeks, the “error message” is actually a display of the complete query and schema. This is not the proper way to handle errors unless you are debugging your own code.

In business, the price of hiring less competent people is very high, perhaps as serious as going out of business. In politics, such hiring is part of a bundle of factors voters must take into account when choosing a candidate for whom they will vote. Read on for a more detailed explanation of the causes of the OPM intrusion.

The Roots of the OPM Breach

Why did the OPM breach happen? Returning to the Navy Times piece,

Elizabeth Newman, an attorney and security clearance expert, said the hack was a clear OPM failure.

“It means that OPM was pretty incompetent,” she said. “They knew that their systems were vulnerable and were warned but did nothing to secure them.”

In November, 2019, Katherine Archuleta was appointed head of OPM. A month later she reorganized the leadership. Federal News Network reported[5] that Ms. Archuleta’s previous job was national political director for the 2012 Obama reelection campaign. One month later, she brought in three cronies. Ann-Marie Habershaw was formerly the chief operating officer of the re-election campaign. Another campaign staffer, Chris Canning, was appointed senior adviser to Archuleta.

But the real bombshell was the new chief information officer (CIO, in charge of computer operations). From the Federal News Network article:

In addition, OPM has hired Donna Seymour, former deputy chief human capital officer for the Defense Department, to serve as the agency’s chief information officer. Seymour’s prior tech experience includes a stint as associate chief information officer for information technology policy oversight at the Transportation Department and as the CIO of Transportation’s Maritime Administration. Chuck Simpson had served as acting OPM CIO beginning in February.

For those not fluent in bureaucratese, “deputy chief human capital officer” means she was in human resources. Ms. Seymour was completely unqualified for the CIO position.

In other words, the top three positions in the agency were handed to political hacks. These folks are the only “hacks” involved in this situation. arsTechnica gave some of the details.[6] A consultant who worked for a company with an OPM contract to manage personnel records learned the Unix system administrator for the project “was in Argentina and his co-worker was physically located in the [People’s Republic of China]. Both had direct access to every row of data in every database: they were root. Another team that worked with these databases had at its head two team members with PRC passports. I know that because I challenged them personally and revoked their privileges. From my perspective, OPM compromised this information more than three years ago and my take on the current breach is ‘so what’s new?’

President Obama’s pattern of staffing the top three or four levels of every single federal agency with people whose only qualification was loyalty to him personally put American lives and security at risk.

Many are saying the Democrats are hoist by their own petard. But in this case the problem is not just coding and testing errors. The larger problem is the people the Democrats are hiring. While the evidence supporting that hypothesis is not yet conclusive, the number of cases is increasing steadily. (One example I did not mention, perhaps the worst of all, is Rep. Debbie Wasserman-Schultz hiring the Awan brothers to handle IT, then encouraging others in the Democrat caucus to also use their services.[7])