[Updated March 24 to include the list compiled by Sen. Tom Cotton (R-AR). As I type this at 2:13 pm (GMT-8) there are rumors that Speaker Pelosi has caved and agreed to a vote on the Senate’s bipartisan bill.  You cannot imagine how happy I will be if this article has been a complete waste of my time!]

Over the weekend the Senate appeared to be reaching agreement on a relief bill for businesses closed by government edict. Senators worked on this through the weekend.  Then House Speaker Nancy Pelosi returned after a one-week vacation and promptly announced the House would write their own bill.  Senate Minority Leader Chuck Schumer promptly fell in line.  As I type this the proposed bill has now failed two motions to close off debate.  Over at the National Taxpayers Union, Andrew Lautz has debunked six of the most common myths about the Senate bill. Here I want to emphasize Rachel Bovard’s dissection of Separker Pelosi’s draft bill.  Rachel’s new book “Conservative: Knowing What to Keep.”

Let’s be clear up front.  This is not a bailout, corporate welfare, or a slush fund.  These businesses are not closed because of actions and decisions they took.  The government ordered them closed.

In San Jose and other cities the police are walking into businesses deemed non-essential and ordering them to close.  By contrast, San Jose, San Francisco, and many other cities have made an interesting decision about one particular industry that is essential: marijuana. 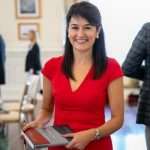 Now Speaker Pelosi has introduced her version of the bailout bill.  Rachel Bovard has identified a number of the more egregious pieces of pork in this travesty.  (The full text of her tweet thread is a pdf file at the end of this article.  Thank you Threadreaderapp.com.)  Fasten your seatbelt, this will be quite a ride.s

First up is the vital necessity of funding audits of elections.  Mind you, Democrats have  screamed for years that there is no voter fraud.  Why then do we need audits?  Good question. 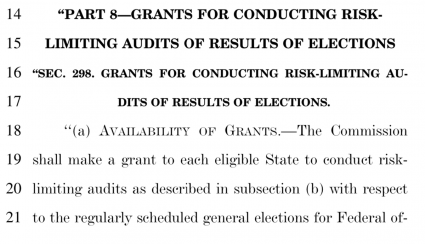 Next up, a bailout for the U.S. Postal Service.  As far as I know, there has been no interruption in Post Office services.  I have not read about layoffs of postal carriers or other employees.  But what the heck, Christmas comes in March this year. 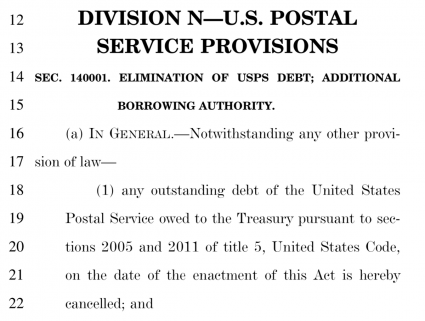 While we’re at it how about prohibiting stock buybacks, dividends, and limiting executive pay?  And, just for kicks, let’s require corporate board diversity. (The comment preceding the bill’s text is Ms. Bovard’s excellent snark.) 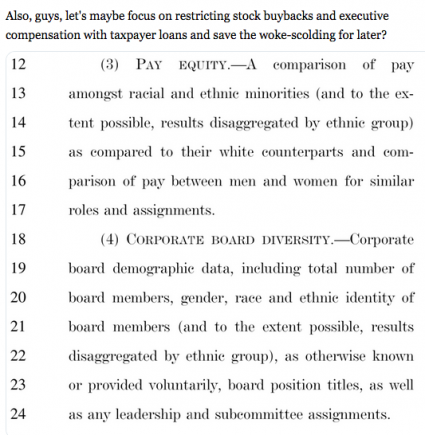 But the bill really gets rolling near the end.  Let’s make airlines greener!  Because limiting aircraft emissions are essential to fighting COVID-19.

This is just a taste of the bloat in this bill.  If this garbage ends up in the final bill, I sort of hope President Trump vetoes it and urges local officials to remove limits on businesses and individuals.