[Edited July 28, 2022 to correct a major error.  In fact, ten out of the twelve recessions since 1947 had two consecutive quarters of negative GDP growth.  I claimed eight.  As penance, I got to compare the official starting and ending dates on the NBER Business Cycles Dating Committee website with the official GDP numbers from the Bureau of Economic Analysis.]

The short answer is no, a recession does not have to have 2 consecutive quarters of negative GDP growth. This article was triggered by a post from Michael Strain (@MichaelRStrain) on Twitter: 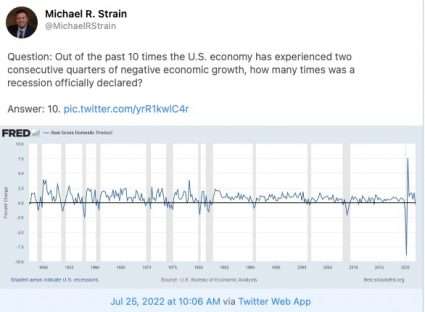 This piqued my curiosity.  Forthwith, the definitive answer to this question: Does a recession really have to have 2 consecutive quarters of negative GDP growth?

For decades, the decision about the starting and ending dates of a recession has fallen to the National Bureau of Economic Research (NBER) Business Cycles Dating Committee.  (Before you get all excited, “dating” refers to assigning calendar dates.)

These folks are solid macroeconomists, grounded in data and forecasting.  Bob Hall and Robert Gordon are long-time researchers and forecasters.  I first ran across Prof. Hall working at Data Resources Inc. in the early 1970s.  He wrote some of DRI’s software.  Prof. Gordon wrote the textbook that I used to teach graduate macroeconomics for several years.  Here are four of the committee members.  (Remember, these are respected economists, not Sports Illustrated models.) 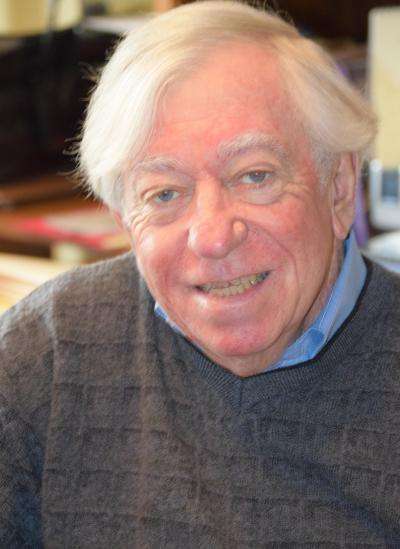 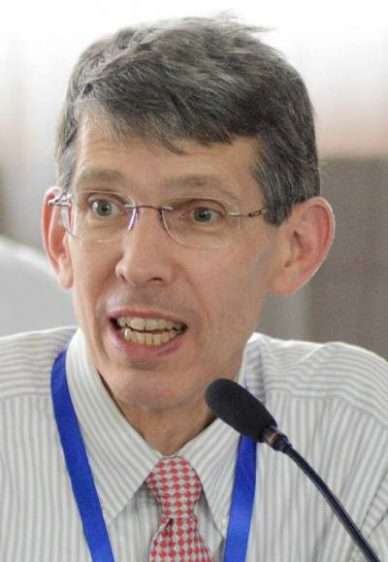 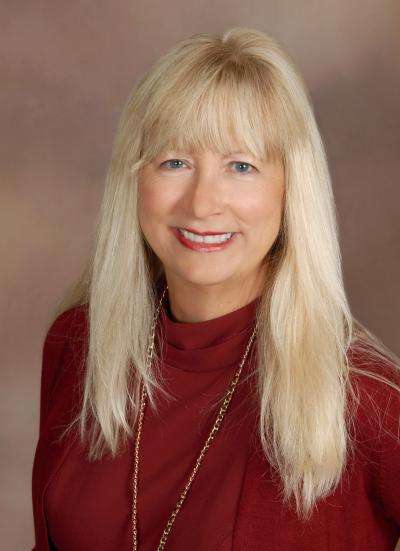 But that’s not really what this is about.  In advance of Thursday’s release of the first estimate of second quarter GDP data, much has been made about the definition of “recession.”  In the distant past, there was a formal definition: two consecutive quarters of negative GDP growth.  But starting in 1978, the definition of a recession was (correctly) expanded to include additional factors.  To a certain extent, this was motivated by the stagflation of the 1970s, triggered by OPEC tripling oil prices twice.  The 1970s and 1980s saw a significant revision of the entire field of macroeconomics.  In 1978 the Business Cycles Dating Committee was formed and tasked with declaring the beginning and end of recessions.

Quarterly reporting of GDP data began in 1947.  Since then, there have been 12 official recessions.  These are shown as vertical grey bars on FRED graphs. 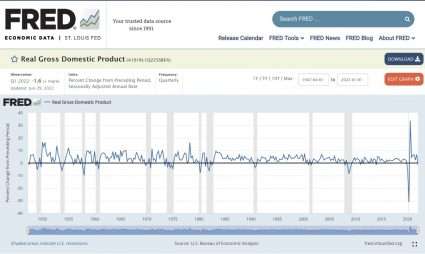 Here are the official recession dates from NBER:

And here are the GDP figures.  The recession dates are highlighted in yellow,  I’ll save you the trouble of searching.  The two recessions that did not have two consecutive quarters of negative GDP growth were 1960:2 to 1961:1 and 2001:1 to 2001:4.  And the 2001 recession had two quarters of negative growth, but there were the first and third quarters.

Luckily, FRED graphs are dynamic.  I’ve embedded this graph below.  It is fully interactive.  If you’re not familiar with FRED graphs, watch the two minute video below the interactive graph.  Below are my best estimates of recessions that did not include two consecutive quarters of negative GDP growth. (You are encouraged to check my work using the interactive graph below.  I’m old and my eyesight is not what it used to be. If you disagree, please let me know in the comments.  Be as specific as you can about which recession and why you disagree.)

This stuff is what economists love.  Thanks for reading. And I’ll just add this.  Every economist who works with numbers makes mistakes.  My advice is to follow my example: admit the mistake quickly, issue apologies, and correct your work (if possible).

This site uses Akismet to reduce spam. Learn how your comment data is processed.