Over at CNBC, pack leader John Carney has been tweeting and writing about the upcoming “Dairy Cliff.” In a nutshell, milk prices could double if Congress doesn’t act soon.

Several months ago an agricultural bill expired.  One of the items that expired with it was price supports for milk.  While this would usually cause prices to fall, Congress is, um, smarter than that.  The new default price support will be the original 1949 level, about twice the expired support.  Hence, the support level doubles, the price doubles, and Congress and the administration have struck again.

John’s article speculates about why futures on Class III milk (used for cheese and other non-drinking purposes) have not increased.  His guess: futures traders understand supply and demand but are not able to factor politics into their forecasts.  Sounds thin to me, but I can’t come up with a better story offhand.  He does have this wonderful phrase: “To rework an old adage, Congress can stay irrational longer than you can stay solvent.”

I can’t let this pass without including a tweet-stream from John about this issue:

Then Carney moves into Punahou territory 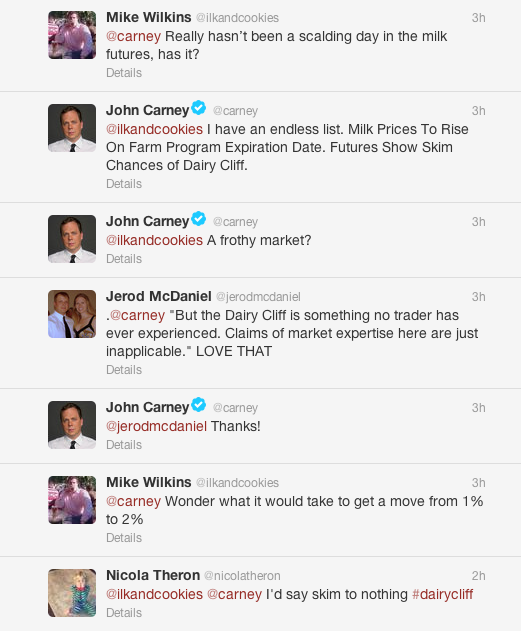 Followed by a plaintive cry for help: