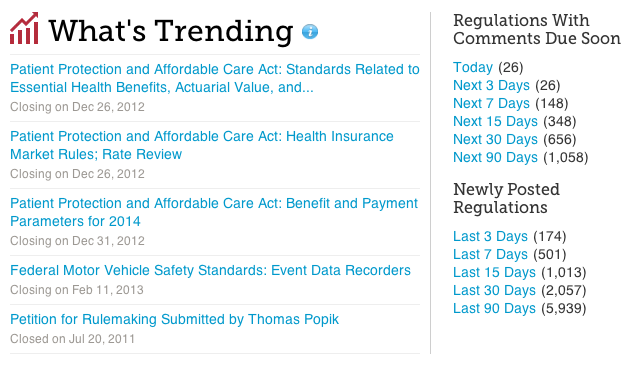 About two years and nine months ago I wrote an article pointing out the limitations of conventional fiscal policy analysis.  To summarize, there is more to fiscal policy than G, TA, and TR (government spending, taxes, and transfer payments for those a little rusty on their macroeconomics).  Government regulations also have a significant impact on the economy.  Now that the election is behind us, the economy has fallen off the other cliff — regulations. This article will give a few examples, but the main point is in the table above (from the handy government website Regulations.gov on December 22, 2012). Almost 6,000 new regulations have been posted in the last 90 days. Half of those (3,148 to be precise) have been posted since the election. (Click the “Last 90 days” link, then look for the “custom date range” filter and you can play along, too.)  If you believe that’s not going to have a significant impact on businesses, then you probably also believe the unemployment rate was under 7 percent last month.

Regulations, Rules, and Hiring, Oh, My

Sometimes the impact of these regulations can be seen easily.  For example, the CAFE (corporate average fuel economy) standards imposed on the U.S. auto industry has done as much as anything to distort the auto market.  Since CAFE standards do not apply to light trucks, automakers in the U.S. have been pushing them like mad.  High margins are maintained with the help of a nifty 25% tariff on imported light trucks. A somewhat offsetting benefit is that some foreign car makers have set up assembly lines in the U.S., increasing U.S. employment.  Trust me, this will not offset the harm done by the tariff.

In other cases, the regulations have a less specific impact.  Most economists now agree that a significant contribution to the high unemployment rate in the U.S. has been uncertainty over the rules and regulations that will be required by the Patient Affordable Care Act [sic] (ACA) and the Dodd–Frank Wall Street Reform and Consumer Protection Act. Uncertainty means risk and businesses — especially small businesses — are very risk-averse.  Some of the impacts are already being seen.  For example, one ACA rule says that part-time employees who work less than 30 hours per week are exempt from ObamaCare rules.  The result has been entirely predictable: businesses that rely on part-time employees are cutting their hours.  One highly publicized example is Papa John’s Pizza.  Darden Restaurants owns the Olive Garden and Red Lobster chains.  They, too, are moving toward limiting part-time employees to less than 30 hours per week.

And consider the marginal cost of hiring employee number 50. “Businesses with 50 or more full-time workers must pay a $2,000 penalty for each employee, beyond the first 30 workers, who qualifies for subsidies and does not have employer coverage.[1] Part-time workers also count toward the number of employees in the firm (and thus toward the 50-employee threshold), but the government does not penalize firms for not offering them qualifying insurance.” (from the Heritage Foundation, but widely available. Other good articles are here and here.).  So hiring employee number 50 carries a potential cost of 20 employees (50-30) times $2,000 per employee fine equals $40,000.  That could easily be more than the actual wages paid to the 50th employee.  I suspect there will be many firms that will simply stop hiring once they get to 45 employees.

Finally, consider the impact of the 2.3% tax on medical device sales in the U.S. scheduled to go into effect January 1.  Medical device companies have announced layoffs as a direct result of this tax. Stryker Corp. will lay off about 100 workers at their Kalamazoo, Michigan offices and about 1,000 worldwide.  I’ve written about this a couple of times before (here and here).  It’s a shame that many so-called economists couldn’t manage to predict this.

[1]The portion of the health care law on the employer mandate explicitly states that firms with more than 50 employees are required to offer “full-time employees (and their dependents) the opportunity to enroll in minimum essential coverage under an eligible employer sponsored plan.” The Department of Treasury, however, has issued a proposed rule linking both the affordability of employer-sponsored insurance and compliance with the individual mandate to single coverage only. Since the employer is not penalized unless an employee enrolls in the exchanges, it is possible that if this proposed rule is adopted, employers will either drop family coverage or be indifferent to the affordability of the workers’ family coverage. Alternatively, the government may ultimately require employers to provide family coverage to workers with dependents. See Patient Protection and Affordable Care Act, Public Law 111-148, § 4980H.

One Reply to “The Other Cliff — Regulations”