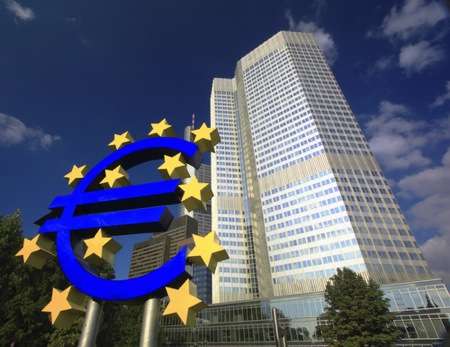 The ECB has a FAQ about this policy at that is actually pretty good, especially regarding the impact on households (none).

Why a Negative Interest Rate?

The idea is simple. Reserves kept as deposits at the ECB will be charged 0.10% per year. The ECB wants banks to lend those reserves, stimulating business investment and the economy. By penalizing reserve holdings, the ECB hopes to encourage lending.

Isn’t it possible for banks to avoid the negative deposit rate? For example, can’t they simply decide to hold more banknotes?

If a bank holds more money than is required for the minimum reserves and if it is not willing to lend to other commercial banks, it has only two options: to hold the money on an account at the central bank or to hold it as cash. But holding cash is not cost-free either − not least since the bank needs a very safe storage facility to warehouse the banknotes. So it is unlikely that any bank would choose to do this. The more likely outcome is that banks either lend money to other banks or pay the negative deposit rate.

But reserve deposits are different. The bank is the lender and the ECB is the borrower. A negative interest rate transfers money from the lender to the borrower. In other words, banks will have to pay the ECB 0.10% per year times their reserve balance at the ECB.

Strategies for Banks to Avoid This Interest Rate

One obvious way for banks to avoid paying this interest rate is to simply not hold any reserves at the ECB. That means the bank’s total reserves would consist of vault cash and borrowed reserves. The ECB can, of course, turn down a bank’s request to borrow reserves.   Will any bank dare to hold their entire reserve balance as cash? The ECB doesn’t think so. This is their statement from the FAQ mentioned earlier →

The ECB Statement on Operations

Monopoly supplier of monetary base

The Eurosystem is the sole issuer of banknotes and bank reserves in the euro area. This makes it the monopoly supplier of the monetary base, which consists of

These items are liabilities in the Eurosystem’s balance sheet. Reserves can be broken down further into required and excess reserves.

By virtue of its monopoly, a central bank is able to manage the liquidity situation in the money market and influence money market interest rates.

We live in interesting financial times. That ancient Chinese curse seems appropriate today. Frankly, nobody knows whether the ECB’s new policy will work or not. If the real problem is a lack of demand for quality loans, then paying 0.10% per year to avoid riskier loans may seem like a pretty good deal. The ECB is implicitly assuming the problem is lack of loan supply. I’m skeptical of this — not just in the Eurozone, but in the U.S. as well.