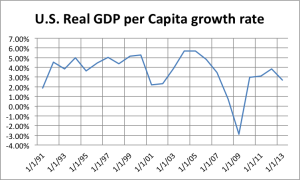 Today’s New York Times includes a 1,458 word column by Binyamin Appelbaum that purports to discuss the slowdown in U.S. economic growth.  I say “purports” because the column is little more than interviews with a number of economists.

Growth is slower, we don’t know why, but we’ll probably have to accept it.

Mr. Appelbaum misses the forest by looking too closely at individual trees. There is a growing minority in my profession who are pretty sure we know the cause of the productivity slowdown: costs have increased for businesses, especially small businesses, because of the proliferation of government rules, regulations, and outright harassment. One example: S&P downgrades U.S. government debt and is promptly sued by the Justice Department. That story makes headlines, but there are tens of thousands of similar, albeit lower profile, cases every day. Long-time readers of this blog will remember my forecast from 2010 (here and here). Prof. Casey Mulligan at the University of Chicago has examined the data in great detail in his book The Redistribution Recession: How Labor Market Distortions Contracted the Economy (Oxford University Press, 2012). Mr. Appelbaum should read this entire book before he writes one more word about the U.S. economy.

The underlying concept is, however, simple. If you increase the cost of any activity, people will reduce the quantity of that activity that they perform. The cost of labor has increased (see “disparate impact analysis” from the Labor Department). Regulations have multiplied. And the economy stagnates. The only people surprised by this are those who willfully ignore the facts.