The July 7 Wall Street Journal features an op-ed by Prof. William Neumark of U.C. Irvine. Regular readers will recognize Prof. Neumark as a leading researcher on the impacts of the minimum wage. Today’s column addresses the issue of how much impact increasing the minimum wage is likely to have on poverty.

The short answer is, “not much.” The problem is noted in the headline: who really gets the minimum wage.

Low-Wage Does Not Equal Low-Income

In other words, for every poor minimum-wage worker who might directly benefit from the minimum wage, two workers in families with incomes more than three times the poverty line would benefit.

Prof. Neumark’s graduate assistant Sam Lundstrom has calculated that if the federal minimum wage was raised to $10.10, just 18% of the benefits would flow to poor families, with 29% going to households with total income over three times the federal poverty line. And Lundstrom’s calculations assume no impact on employment. (An equivalent assumption is that the impacts on employment are randomly distributed among recipients, so the employment impacts are spread proportionally across the various income groups. That, of course, would keep the income distribution constant.)

What About Even Higher Minimum Wages?

Mr. Lundstrom repeated his calculations for a minimum wage of $15 per hour (the soon-to-be minimum wage in Seattle). This minimum wage will affect more workers because the number of workers who earn $15 or less is greater than the number who earn $10.10 or less. But workers who earn between $10.10 and $15 per hour are also less likely to be in low-income families. At a $15 minimum wage, the percentage of benefits flowing to low-income households declines to 12% and the percentage flowing to families with income greater than three times the poverty line rises to 36%.

To understand how this works, it’s helpful to consider the characteristics of poor families. About half of poor families have no household members that are employed. Changes in the minimum wage, by definition, cannot help or hurt this group. Thus, off the top, half of those at or below the poverty line will not be directly affected by changing the minimum wage.[2]

Among the employed, the number of persons working part time for economic reasons rose by 275,000 to 7.5 million in June. (These individuals would have preferred full-time employment, but had their hours cut or were unable to find full-time work.) The number of these workers is down over the year but has shown no clear trend in recent months.

Third, some poor household earn a wage higher than the minimum wage, but do not work enough hours to generate the income to get above the poverty line. In this regard, Obamacare’s incentive for shifting full-time workers to part-time jobs is instructive — and destructive as well. In the most recent jobs report (for June, 2014), the commissioner’s statement included this paragraph →

There are many explanations for poverty in the U.S. But it’s clear that some government policies have increased the percentage of households in poverty. Obamacare and the shift to part-time employment is one example of such a policy. To give an example, suppose an employee is making $15 per hour and working 30 hours per week. Weekly income is $450, about $22,500 per year. [3] To avoid Obamacare penalties, the firm reduces the workweek to 20 hours. Bingo — the worker is now making $300 per week, about $15,000 per year. Remember the statistic cited earlier: the U.S. poverty line for a family of four in 2007 was $20,650. Our hypothetical worker has moved into poverty even though the wage rate has not changed.

The central point of this literature is simple. Income equals the hourly wage rate times hours worked. Thus, if wages increase by 10% and hours decrease by 10%, income will be unchanged.[4]

Now About That Second Burkhauser-Sabia Paper

This is where it gets scary. The 2010 Burkhauser-Sabia paper updates both the methodology and the data. First, the federal minimum wage was increased from $5.15 to $7.25 in 2007. Proposals are floating around Washington, D.C., for a second increase, to $9.50. Burkhauser and Sabia look at both these scenarios. Rather than look at history, I’ll only discuss the current proposal to raise the minimum wage to $9.50.

Burkhauser and Sabia begin by assuming there is no impact on employment. Regular readers will immediately realize that I’m not going to discuss that part of their paper. But then they do something unusual. Rather than statistically testing the impact of the minimum wage on employment, they simply do their calculations for several values of the elasticity of demand for labor. They subsume the “no employment impact” model by including an elasticity of zero. Using “consensus” estimates from the literature. Columns (1) and (2) show the distribution of benefits assuming no employment response to the higher minimum wage. Columns (3) through (5) assume elasticities of -0.1, -0.3, and -0.6. Column (6) assumes an elasticity of -0.86, near the “breakeven” elasticity of -0.863. At that elasticity, the sum of dollar benefits equals zero. Elasticity estimates are from Neumark and Wascher (2007).[5] and Burkhauser and Sabia (2007) among others.

Finally, column (8) calculates benefits for each group assuming a -0.6 elasticity for younger dropouts and -0.2 for all other workers. This is the authors’ “preferred” elasticity combination.

And the Results are In

Before digging into the numbers, let me make a couple of disclaimers. Numbers in the following table are based on Table 7 from Burkhauser and Sabia (2010). I have recalculated many of the percentages to check that they add up to 100%. When the sum was not equal to 100%, I added up the individual dollar benefits in each column that uses dollar benefits, then used that calculated total as the denominator in the percentage calculations. My percentages do not exactly match those in the original article. But the discrepancy is minor. (Those who want to do a comparison can download the Excel workbook by clicking here. The first tab, Table7all, is the data copied from Table 7 as accurately as I can. If you want your own copy of Table 7, e-mail me and I’ll send it to you. But you’ll be better off — and more comfortable — just tracking down the article and reading it for yourself.

Each of the following tables can be enlarged by clicking the image.  These are picture files, not Excel worksheets.  Click the above link if you want a “live” Excel workbook.

The first set of results assume no employment response to the higher minimum wage.

Only 10.9% of total benefits flow to families below the poverty line. By contrast, 40.7% flow to households with income at or above three times the poverty level.

To draw an even sharper contrast, consider an income of 1.5 times the poverty level, $30,975 per year. Over three-fourths (75.4%) of benefits from raising the minimum wage would flow to this group. Are these really the folks we want to help?

When Elasticity is Low

The two low elasticities are -0.1 and -0.3. Remember, the interpretation is that a 10% increase in the minimum wage causes job losses of 1% and 3% respectively. These are fairly small effects. And, as it happens, it doesn’t matter much. Excerpted from Table 7 with sums and percentages recalculated by me:

Once again, we see that about 75% of net benefits flow to those with family incomes of 1.5 times the poverty rate or higher. And, as before, the percentage going to those actually in poverty is 10.9%.

When Elasticity Is Higher

With an elasticity of -0.6, the distribution of net benefits changes slightly.

Note that there are no percentages calculated for e = -0.86. That calculation becomes difficult when the denominator is zero. Recall that e = -0.863 is the elasticity at which total net benefits in dollars are zero (the authors refer to this with the entertaining name “breakeven elasticity.”)

The final calculation undertaken by Burkhauser and Sabia uses an elasticity of -0.6 for dropouts between ages 16 and 29, with e = -0.2 for everyone else. This is the authors’ preferred model. Regardless, the results do not change much: 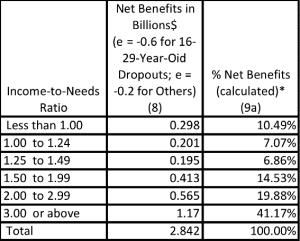 Every reputable economist who has studied the minimum wage has concluded it is a bad way to fight poverty. Far better is the earned income tax credit. However, that program will also not affect people living in households where no one works. Perhaps restoring the Clinton-era “welfare to work” programs would be helpful.

[1] This is from Prof. Neumark’s article. Many of the facts in his op-ed are from Burkhauser, Richard V. and Joseph J. Sabia (2007). “The Effectiveness Of Minimum-Wage Increases In Reducing Poverty: Past, Present, and Future” Contemporary Economic Policy 25:2 April 2007, pp. 262-281. However, a bit of online research revealed the existence of a more recent work: Burkhauser, Richard V. and Joseph J. Sabia (2010). “Minimum Wages and Poverty: Will a $9.50 Federal Minimum Wage Really Help the Working Poor?” Southern Economic Journal, 76:3, pp. 592-623. I will speculate on the implications of this later publication toward the end of this article.

[2] Indirect effects include greater difficulty getting a job in the future because of the increased competition for jobs created when the higher minimum wage creates more unemployment.