“Gaza is One of the Most Densely-Populated Areas on Earth”

We’ve been hearing this statement on the news lately. I decided to do a small investigation. Is Gaza one of the most densely-populated areas on earth?

To cut to the chase, the answer depends on the basis of comparison. The population density of the Gaza Strip is 5,045.5 people per square kilometer. But Gaza is neither city nor country.  Comparisons are, necessarily, difficult.  Comparing Gaza with countries and city-states (including Hong Kong), Gaza is number three.  But looking at cities instead, Gaza is number 46.  (The second table below shows Gaza as number 47, but it counts Singapore twice.)  And two cities in India – Mumbai and Kolkata — have densities over 20,000 per km². Finally, a quick look at Ralah via Bing maps satellite view seems to show large areas of open space.  My conclusion: locating rockets near schools and hospitals is a choice made by Hamas, not a necessity caused by overcrowding.

First, using Bing maps’ satellite view, I found Ralah, Gaza, near the site of a recent Israeli airstrike.[1] Then I looked for nearby large open spaces. Here’s the result. (Click the image for a larger view.) 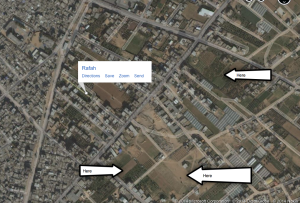 Next, naturally, I decided to look at the data.[2] Courtesy of the CIA World Factbook, I calculated the following:

Gaza apparently has the third-highest density in the world. However, let’s consider cities. (Hong Kong and Singapore[3] are, after all, city-states.) 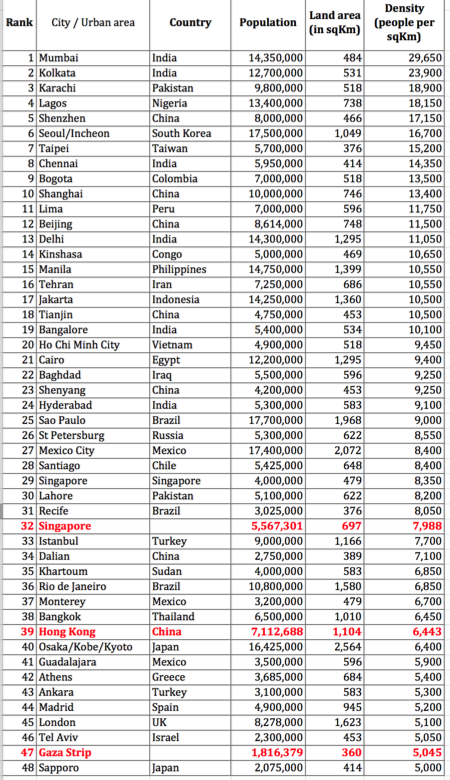 (The WordPress image manager did not cooperate giving me the image size I wanted.  If you want a full-size version of the above image click here.)

Gaza is, indeed, densely populated. But anyone who has visited London, Athens, or Istanbul can tell you there is a fair amount of open space. All this suggests there is plenty of open space in Gaza. Placement of munitions is a choice, not a necessity.

As always, my Excel workbook is available by clicking here.

[3] Singapore is on the cities list twice. The figure in red is my calculation from the CIA World Factbook. Three rows above at number 29 is from citymayors.com. My guess is that the CIA figures are more current.