People seem to have forgotten this lesson. Central banks can only directly affect the quantity of bank reserves. That is the “push.” The money supply, however, only grows when banks lend those reserves. And that has been the source of the Fed’s problem since 2008.

The Fed has been buying securities at a furious rate. In 2013 our central bank bought around 70% of the net new issues of U.S. debt. And it has done almost no good. Banks are experiencing a quadruple whammy:

And they are not lending. They are sitting on huge piles of excess reserves. 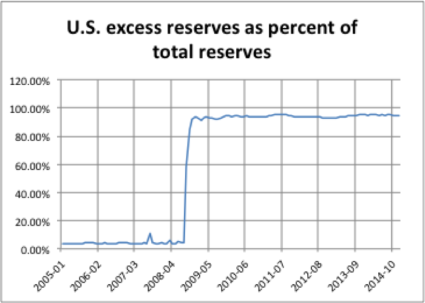 But what about the money supply? Here’s the unhappy picture: 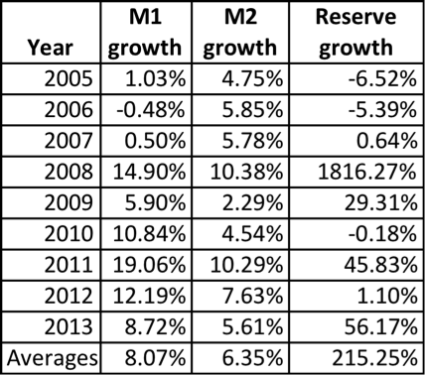 Average annual growth rates of M1 and M2 are in the 6% – 8% range. Reserves have averaged 215.25% per year. Reserves are not being loaned. And until lending picks up the Fed might as well close up shop.

While I don’t ordinarily use Wikipedia, the site can be helpful when trying to track down the origin of a phrase. (Footnotes are also copied from that source.) Forthwith,

According to Roger G. Sandilans[1] and John Harold Wood[2] the phrase was introduced by Congressman T. Alan Goldsborough in 1935, supporting Federal Reserve chairman Marriner Eccles in Congressional hearings on the Banking Act of 1935:

Governor Eccles: Under present circumstances, there is very little, if any, that can be done.

Congressman Goldsborough: You mean you cannot push on a string.

Governor Eccles: That is a very good way to put it, one cannot push on a string. We are in the depths of a depression and… beyond creating an easy money situation through reduction of discount rates, there is very little, if anything, that the reserve organization can do to bring about recovery.[3]

Loan demand will not pick up until after the 2016 election at the earliest.  Until then, we’ll just have to try to hang on.