Today’s article is prompted by another idiotic statement from the White House coupled with a few very stupid responses on Twitter. I’m encouraged, however, by the number of intelligent, correct replies. Today I’ll discuss the U.S. government debt and deficit revisited.

You can save some time by reading this first. The article discusses the basic accounting relationships between a deficit, the debt, and the quantity of money in circulation. This stuff is not difficult. The fact that so few people do not understand it is a testimonial to the sad state of economic and financial literacy in the U.S. And, as always, my data is transparent.  Click here to download my Excel workbook.

The Tweets and Responses

I noticed this little controversy in the summary at Twitchy.com. It begins with a tweet from the White House:

Twitchy summarized the readers’ comments starting with this one (which is 100 percent correct):

But if you read to the end you’ll find this (which asks for the impossible):

A Review for Those Who Did Not Click the Link

Now I know many of you will not click the previous link. (If you did, click here.) So here’s an ultra-short summary. Although I’ve described this using the government as an example, the relationship between debt and a budget applies to individuals, businesses, and every other entity.

Note that none of this affects the money supply. The government borrows because it needs money to spend. The money that buyers pay for the bonds is almost immediately spent by the government, leaving the quantity of money in circulation unchanged.

Where does the newly-created money come from? The central bank creates it. Central banks can decide to create or destroy money based entirely on the decisions of people assigned to make those decisions. They do not worry about gold, silver, yak butter, sharks’ teeth, or the infamous stone money of Yap. They only worry about the current and future state of the economy.

It happens that another project led me to update the data from my 2010 article. The data is from the U.S. Department of the Treasury, Office of Debt Management, Office of the Under Secretary for Domestic Finance Table OFS-2 as of March, 2014. 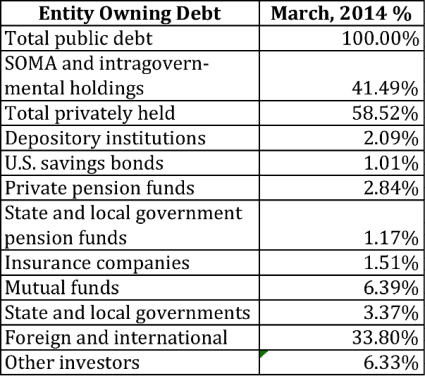 If you’re more comfortable with a chart, here it is: 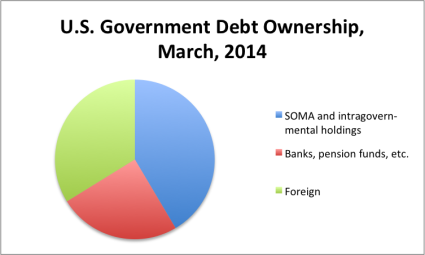 Compare the above with data from my 2010 article: 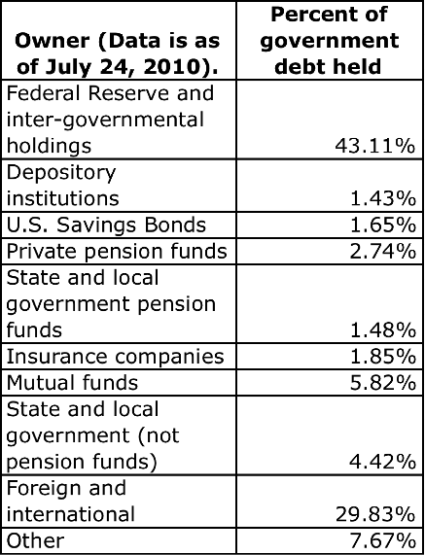 Foreign ownership is large and growing.

“But,” some people say, “our GDP is very large.  What about the debt-to-GDP ratio?” 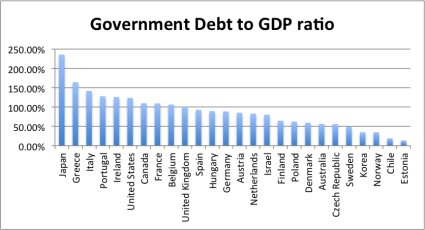 We don’t need to worry about the U.S. government debt because it’s mostly owed to U.S. residents.

When I first studied economics several decades back, textbooks commonly made this statement →

Honestly, this material is not difficult and the data is readily available. I always have trouble understanding why people don’t simply look at the facts instead of trusting the media. Nearly everyone in the media, including most of those who report on economics, are illiterate about even the most basic economic concepts. Remember, their college degrees are in journalism or communications. Somewhere along the way an editor decided they knew some economics. They don’t.

[1] Please don’t give me a hard time about this simplification. I know the purchase actually creates bank reserves. I even understand why the money supply mechanism in the U.S. is broken today.