I’m updating the instructor’s resource guide for a principles of economics textbook. One of the many, many things discussed is the average duration of unemployment. Given who I am, it should not surprise you to learn that I looked at the data. What I discovered is yet another measure of the anemic state of the U.S. economy.

For 2014 the average duration of unemployment was 33.7 weeks. That’s an average. If you became unemployed in 2014 you could expect to be out of work for 7.78 months. By contrast, in 1986 the average duration was 15.0 weeks (3.46 months). But what’s really troubling is the behavior of this variable since 2008 (the beginning of the Great Recession). 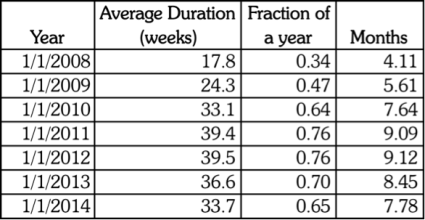 You are reading that correctly. The average duration of unemployment in 2014 is still higher than it was in 2010.

I’ve written a great deal over the years about the decrease in the labor force participation rate and its implications for the U.S. economy. But, frankly, this took me by surprise. Anyone who still thinks the U.S. economic “recovery” is real should check their privilege.

FWIW, here’s the graph showing yet another terrible result of the current economic malaise. 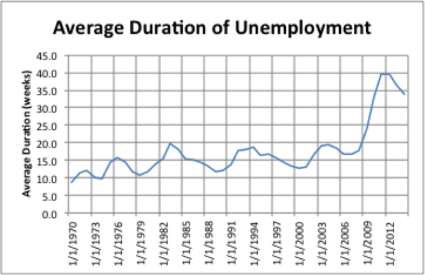