[Re-upping this because of the recent burst of news. Originally published April 20, 2014. Note that Puerto Rico already fleeced investors when they issued these securities.  If a corporation had done this the SEC would have them in court for failure to disclose material facts in the prospectus. 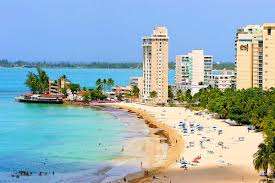 I’ve been doing some research on the municipal bond market, specifically troubled communities.  Bankruptcies in Stockton and San Bernardino (California), borderline fraud in Harrisburg (Pennsylvania) and, of course, Detroit have left everyone wondering, “Who’s next?” Preview: Puerto Rico got away with it.

In 1917, the U.S. granted citizenship to Puerto Ricans. In 1948, it granted Puerto Ricans the right to elect their own governor. In 1952, under request by the United States, a local territorial constitution was adopted and ratified by the electorate. Under the tenets of the Puerto Rico Federal Relations Act, Puerto Ricans are still subject to the plenary jurisdiction of the U.S. Congress, and the island continues as a U.S. territory.

One good candidate is Puerto Rico.  Technically a U.S. unincorporated territory, the archipelago is subject to U.S. law and tax regulations.  A brief history from Wikipedia →

On March 17, 2014 Puerto Rico issues new government debt. This was their first new issue since August 28, 2013. And it looks like Puerto Rico got away with it.  On the issue date the yield on these bonds was 8.618%.  A month later the yield was 9.335%, a whopping 71.7 basis points higher. (This data is from Bondview.com.  They offer a plugin for Excel that makes getting data like this easy.  Their data, however, is intra-day trade data.  I have a short procedure and some Visual Basic code that will translate this into end-of-day yields.) 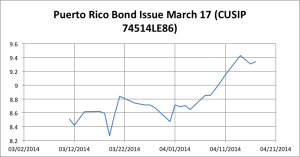 These bonds are CUSIP 74514LE86. The bonds are Puerto Rico Commonwealth Series A maturing July 1, 2035.  Take a deep breath. Those are 20 year bonds.  The Commonwealth unloaded $3.5 billion of these with a hefty 8 percent coupon according to EMMA.  But, as we all know, a bond is nothing more than a promise to make one or more future payments on specified dates.  The quality of that promise is reflected in the yield to maturity, not the coupon yield.

My calculations show that Puerto Rico collected $218,750,000 more than they would have if the bonds had been priced correctly (the market price on April 17).  Putting this another way, if you bought those bonds on March 17, you suffered a notional loss of $66.50 per $1,000 of face value. (Your loss of $62.50 is per $940 of face value.) You also get to congratulate yourself on propping up the Puerto Rico government for a few more months.

As always, my methods are transparent.  This Excel workbook has macros enabled so you will probably get a security warning when you open it.  The workbook includes the Visual Basic script which is not necessary to most of the functionality.  Disable macros if you’re nervous.  Click here to download the Excel 2007 workbook.

One Reply to “Puerto Rico Got Away With It”