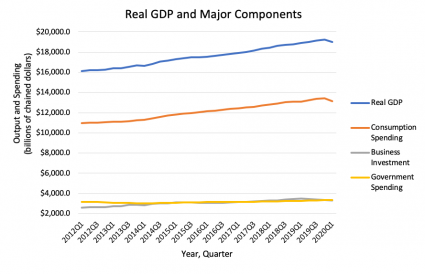 The one saving factor was net exports. Some reporters got this wrong because they saw that fourth quarter net exports were -$900.7 and were -$815.4 in the first quarter. The balance of trade improved in that it moved closer to zero. Some observers saw this as a negative contribution to GDP growth. They have forgotten that a change from -2 to -1 is an increase, not a decrease. In fact, net exports contributed +1.3% to the overall -4.9% growth rate. Putting this another way, without net exports, real GDP would have decreased by 6.2%. 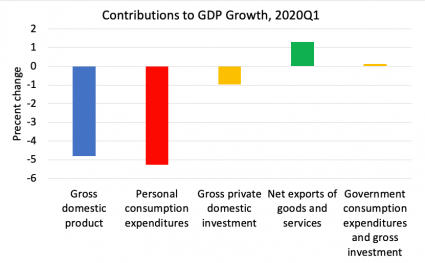 Some may be wondering why the decrease was so small. After all, the unemployment filing numbers we’ve been hearing have been, frankly, terrifying. Remember two things. First, the lockdowns did not really get started until March. That means January and February were fairly normal. Second, this is the advance estimate. The first revision will be released in late May and the third estimate will be in late June. That’s why we sometimes say that managing the economy is like a bird flying backwards: our avian pal can see where he’s been but must predict where he’s going.

Why did services take such a hit?

To understand this, you need to know what’s included in spending on consumer services. Over the past few decades the fastest-growing component has been meals eaten away from home. We know that restaurants have suffered to the point that we are likely to emerge from this episode with as few as half of all restaurants still in business. Similarly, entertainment events, particularly those in large venues, have vanished. College baseball fans like me at least got close to half a season. Fans of professional sports have been out of luck. Concerts have experienced a similar fate. They could have used that money to buy other goods and services. So let’s take a look at what actually happened.