Thursday the Supreme Court handed down its long-awaited decision in West Virginia v. EPA.  The majority ruled that under the “major questions doctrine” the Environmental Protection Agency lacked authority to regulate greenhouse gases under the Clean Air Act. Jonathan Turley and Carrie Severino have informative comments shown at the end of this article.

“But,” you say, “this blog is supposed to be about economics!” My answer is simple. There is a well-developed and active field called environmental economics.  A lot of the focus is on benefit-cost analysis.  Along the way students learn about the growth dynamics of renewable resources, the optimal usage path for depletable resources, and the profit-maximizing time to harvest a stand of Douglas fir.  As you may have guessed, I taught this course for about 15 years.  In West Virginia v EPA there are clear costs to the economy if greenhouse gases are regulated.  This rule has as much to do with economics as, well, any rule EPA has ever promulgated.

In essence, the majority ruled that Congress should stop giving major decisions to bureaucrats and pass laws.  The reasoning for this is straightforward:

For those who have trouble deciphering eighteenth century handwriting, here’s a transcript: 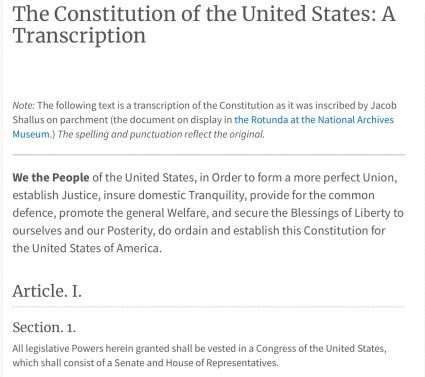 This law was intended to regulate air pollution including carbon monoxide, various nitrogen and sulfur oxides, ozone, and other gases harmful to human health.  The ruling contained two parts.  First, the court found that regulating greenhouse gas emissions was a major question.  Second, the Clean Air Act does not refer to these gases.  Prof. Turley and Ms. Severino have some additional thoughts.