Once more into the breach, I’ll take a final look at the first quarter GDP. (At least, I sure hope it’s the final look.) Many pundits have noted that healthcare spending actually fell in the first quarter. Their hypothesis seems to be that healthcare spending and first quarter GDP are cause and effect. Zerohedge (Tyler Durden) has the best stories about this (http://www.zerohedge.com/news/2014-06-25/gdp-disaster-final-q1-gdp-crashes-29-worst-2009-far-below-worst-expectations and http://www.zerohedge.com/news/2014-06-25/here-reason-total-collapse-q1-gdp). Mr. Durden cynically believes that this is a deliberate fudge, with the spending being pushed forward into the second quarter. Normally I’d debate that point, but in view of other information I’ll simply wait and see. Here’s a key chart from Mr. Durden’s excellent website: 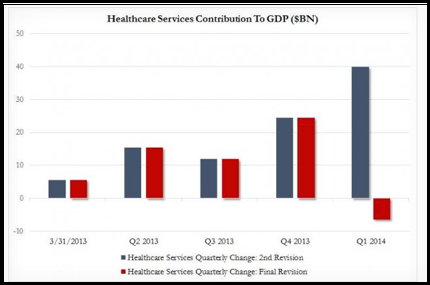 Why did healthcare spending fall? A clue is found in the June 29 San Jose Mercury-News. Apparently California’s Medicaid expansion is not going well. (This program is called MediCal, of course.) The Mercury-News reported that some 900,000 applications were waiting to be processed. The backlog was 800,000 in April. Another 100,000 were added in May. The backlog has not changed since then meaning the state is processing new applications as fast as they arrive. But this keeps the stock of unprocessed applications constant. Without more resources, the backlog is unlikely to be reduced.

Those 800,000 unprocessed applications accumulated during the first four months of the year. During that period, many people were left in limbo about healthcare coverage. And remember, this is Medicaid. These people are likely to be relatively poor. They probably did what most poor people have done for several decades: ignore minor health issues and visit an emergency room if they really need healthcare. But, of course, those emergency room visits are “free” in that the consumer does not pay for the visit. Those visits will show up as higher healthcare premiums in the future.

My guess is that healthcare spending fell precisely because the same story applies to most of the country.  Obamacare is like watching a slow-motion train wreck.  Just when you think things can’t get any worse, they get worse.

Was Healthcare Spending That Important?

Yes, healthcare spending fell in the first quarter — by 1.42% to be precise. The table below is based on Table 1.5.6 from the Bureau of Economic Analysis. Red highlighting and percentage change calculations by your faithful author. (The Excel workbook has returned.  Click here to download.) 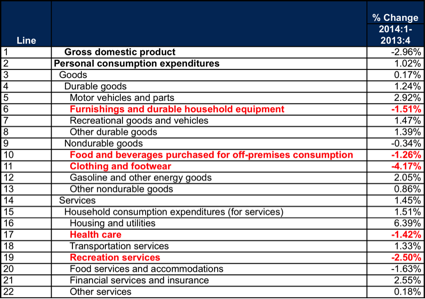 But why worry so much about healthcare? Recreation services fell by 2.5%. Spending on clothing and footwear was down 4.17%. And, the worst news of all, consumer durables, furnishings and durable household equipment decreased by 1.51%.

To understand the importance of that last figure, consider the gross private domestic investment part of the table: 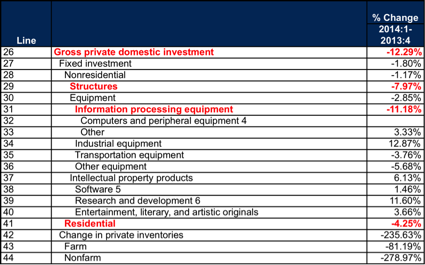 Well, it happens that there’s a country just north of us that had about as bad a winter as the U.S. That’s Canada, where first quarter GDP grew 2.2%. This growth occurred despite a contraction in gross investment (-1.6%) and a huge drawdown in business inventories of -$495 million (Canadian dollars, of course). Somehow, even faced with harsh winter conditions, those intrepid Canadian consumers managed to increase spending by 2.6%. Perhaps Amazon.com and Google shopping are easier to use north of the border.

Was the Weather Really That Bad?

Not really.  Here are some summary statements and maps from Environment Canada:

The national average temperature for the winter of 2013-2014 was 0.4°C [0.72°F] below the baseline average (defined as the mean over the 1961-1990 reference period), based on preliminary data, which is the 24th coldest observed since nationwide recording began in 1948. 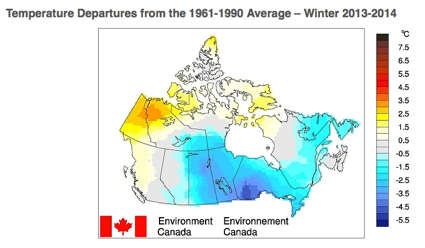 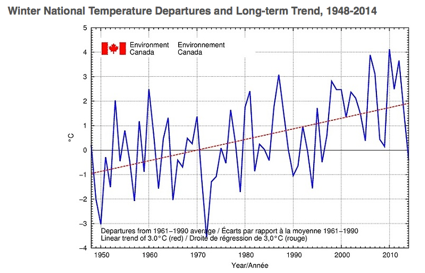 We can also look at precipitation for Canada: 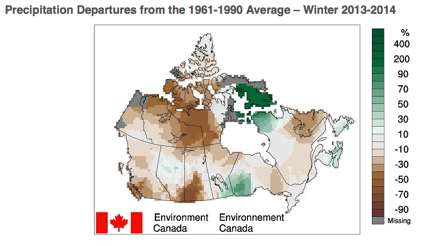 Environment Canada has a comment and a caveat for those interpreting the precipitation map:

The national average precipitation for the winter of 2013-2014 was 9% below the baseline average, based on preliminary data, making it the 15th driest winter since nationwide recording began in 1948.

It should be noted that “average” precipitation in northern Canada is generally much less than it is in southern Canada, and hence a percent departure in the north represents much less difference in actual precipitation than the same percentage in the south. The national precipitation rankings are therefore often skewed by the northern departures and do not necessarily represent rankings for the volume of water falling on the country. 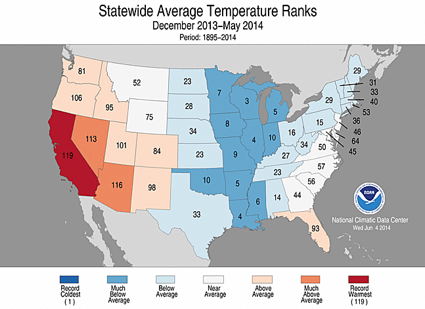 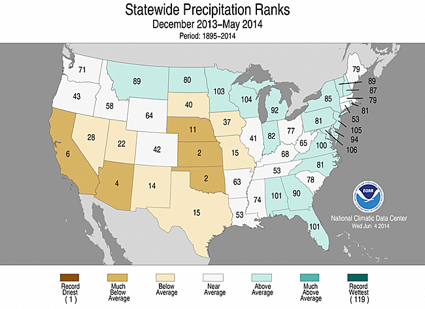 The winter of 2013-2014 was not as bad as the headlines would have you believe, especially in the western U.S. and Canada.  Naturally, the east coast media bias tends to focus on what reporters and editors are seeing outside their windows rather than actual data.  In any case, those who blame the bad winter for the U.S. economic performance should perhaps take a lesson from our neighbor to the north.

One Reply to “Healthcare Spending and First Quarter GDP”