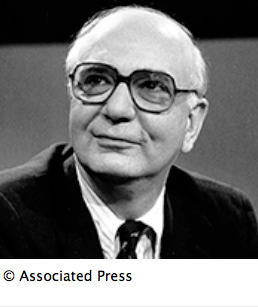 “Our credibility will ultimately be judged by how we do on both of these mandates, not just the price mandate,” Mr. (Charles) Evans said Tuesday night. “I think we will be judged very badly” if officials do not act forcefully to reduce unemployment and instead, he said, “worry obsessively”about inflation.

Congressman Goldsborough: You mean you cannot push a string.

Governor Eccles: That is a good way to put it, one cannot push on a string. We are in the depths of a depression and … beyond creating an easy money situation through reduction of discount rates and through the creation of excess reserves, there is very little if anything that the reserve organization [Federal Reserve Board] can do toward bringing about recovery. I believe that in a condition of great business activity that is developing to a point of credit inflation, monetary action can very effectively curb undue expansion.

– Testimony before the House Committee on Banking and Currency, March 18, 1935.

In today’s Wall Street Journal, Stanford Prof. John Taylor makes his case for a monetary rule, specifically one that targets interest rates. Those familiar with the “Taylor rule” will recognize this immediately as self-promotion. But we all do that. The larger question is whether an interest rate rule is the best policy in all circumstances.  In that regard, Prof. Taylor fails history.

Thankfully, a recent paper by Joshua D. Angrist, Òscar Jordà, and Guido Kuersteiner[2] has explored this issue. The question they examine is whether monetary policy has different impacts when it is contractionary versus expansionary. They conclude,

Application of this estimator to the effects of monetary restraint suggest contractionary policy slows real economic activity. By contrast, the Federal Reserve’s ability to stimulate real economic activity through monetary expansion appears to be much more limited. Estimates for recent financial crisis years are similar to those for the earlier, pre-crisis period.

In other words, monetary policy is more effective when an overheated economy needs cooling off. Expansionary policy, on the other hand, is not quite so effective.

As chairman at the Board of Governors, Miller became known for his expansionary monetary policies. Unlike some of his predecessors, Miller was less focused on combating inflation, but rather was intent on promoting economic growth even if it resulted in inflation. Miller argued that the Federal Reserve should take measures to encourage investment instead of fight rising prices. He believed that inflation was caused by many factors beyond the Board’s control.[3]

The Fed’s historians are far too polite. Mr. Miller’s graduated from the “U.S. Coast Guard Academy with a bachelor’s degree in marine engineering. He later received a law degree from the University of California’s School of Law at Berkeley.”[4] He apparently had little understanding of economics. His policy was to target nominal interest rates. That caused a major problem that can only be understood in the context of the 1970’s. 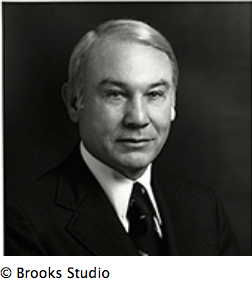 This is the period described by economic historians as “The Great Inflation.” Inflation had been high and volatile for most of the decade. Macroeconomic models used then were woefully inadequate to handle the supply shocks of that time period. By 1978 financial markets had become sensitized to inflation.

A Digression on the Fisher Equation

Most of the time inflation expectations are backward-looking. That means markets expect future inflation will be about like the inflation of the recent past.

But, when markets are sensitized to inflation, expectations can become forward-looking. Instead of basing expected future inflation on past inflation, markets look at the underlying causes of inflation. And when inflation is high and volatile, markets will use the growth rate of the money supply to predict future inflation.

Note that expected future inflation now depends on the past growth rate of the money supply (m).

By 1978 markets were using forward-looking expectations. To make the model more realistic, I’ll add an external shock variable, s. During the 1970’s the main source of these shocks was oil price increases. I’ll also assume a three-period lag in expectations formation with α1 = 0.7, α2 = 0.2, and α3 = 0.1. Thus, our model looks like this: 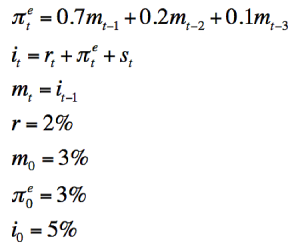 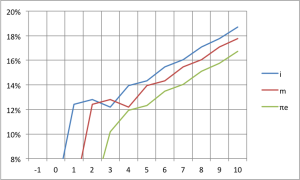 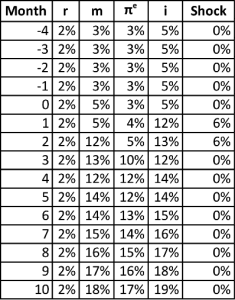 Did this really happen in the late 1970’s? I have some inside information. I was working with Prof. George L. Bach at the time.

The Fed doesn’t think they can control interest rates.[6]

Dr. Bach was a member of the Fed’s Academic Advisory Committee. He came back from one meeting shaking his head. I remember his words clearly →

Our discussion expanded on that point as follows. If the Fed used expansionary policy, the markets would translate that into higher inflation expectations and interest rates would rise. But if the Fed used contractionary policy, the markets would notice the decreased liquidity — and both the real and nominal interest rates would rise.

Lee Bach was afraid. So was I.

President Carter has a unique distinction among U.S. presidents. He made one of the worst appointments as Fed chair — and one of the best. Mr. Miller was appointed Secretary of the Treasury in 1979, serving in that post for two years. Mr. Carter then appointed Paul Volcker as Fed chairman.[7] Again, the Fed’s history website doesn’t do justice to Mr. Volcker’s actions. He quickly implemented a policy of targeting non-borrowed reserves. And he lowered the target aggressively. In language people can understand, that means Mr. Volcker shifted the policy instrument from nominal interest rates to the quantity of money in circulation. 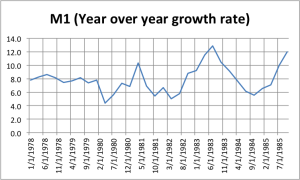 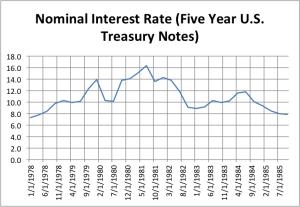 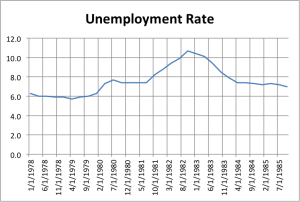 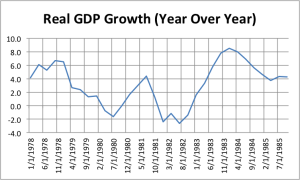 The economy was put through a sharp, severe recession. But in four years the inflation rate was reduced to four percent. After that, Mr. Volcker began to expand the money supply, shortening the duration of the recession. 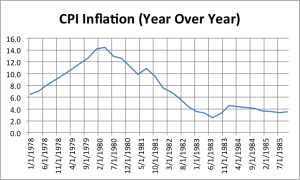 The point is straightforward. Those who advocate any kind of monetary policy rule must allow for exceptions. The Fed cannot be replaced with a computer. Arguing that the Fed should target interest rates when those rates are near zero is, frankly, silly.

[5] This is an approximation. It’s good enough for what I’m doing here.

[6] Personal communication with the author, about 1979.