There has been speculation that a substantial part of the growth in third quarter GDP was caused by subprime auto loans. According to the third estimate, real GDP grew 5.0% at an annual rate. In this article, I use data from the Bureau of Economic Analysis, Experian Automotive, and Equifax to estimate the actual impact. Using Experian’s estimates for leases, loans, and risky lending I conclude that the contribution to third quarter GDP growth from subprime lending was about 0.05 percentage points. I also note that there are subprime loans for recreational vehicles. However, I could not find any data. I assumed the automobile percentages applied to the RV market as well.

A second source is a speech given by Joy Wilder Lybeer, a senior vice president at Equifax. Ms. Lybeer claims that one-third of auto loans are subprime. This is in stark contrast to Experian’s estimate of 10.57%. Using Ms. Lybeer’s estimate, the contribution to third quarter growth from subprime lending was 0.13%. Using BEA standard rounding technique, third quarter growth would have been 4.9% instead of 5.0%. That’s a noticeable difference. But 4.9% is nothing to sneeze at.

There are two areas that pose far greater problems. The first is the persistent growth of inventories. Whether that reflects business optimism about the future or lower than expected spending today is a topic for debate.

The second is the burst of growth in intellectual property investment. This is a fairly new addition to GDP and, as many have noted, a category that is fraught with estimation difficulties. Let me just say that between inventory and IP growth, the 5.0% overall growth rate looks a bit shaky. But it’s not because of subprime vehicle loans.

The Mystery of Third Quarter GDP

The third (“final”) estimate for U.S. real GDP growth in the third quarter was a whopping 5 percent. There have been various reasons cited for this astonishing performance. One explanation is the sluggish economic performance in the first quarter created pent-up demand that exploded over the summer months. Another is the boost from sub-prime auto lending. I’m going to once again violate my promise to not use government data to dive into the GDP numbers and see if there’s anything there. Except as noted, all data is from the U.S. Department of Commerce, Bureau of Economic Analysis. [1]

At the gross level, let’s first look at the growth rate compared to the second quarter. Overall growth was 4.97%. The components with the largest quarter-to-quarter growth were: 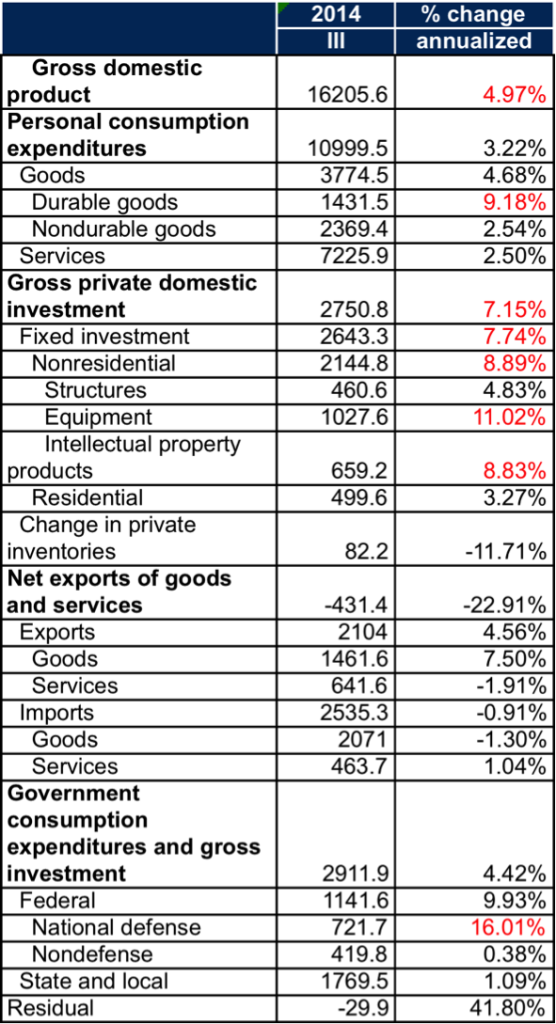 The growth of durable goods spending bears further examination because that’s where automobile sales are buried. I’ll look at the details in the following section.

The robust growth of business investment is a welcome improvement from the first quarter’s anemic levels. However, the change in business inventories was +$82.2 billion dollars, down slightly from the second quarter’s +$84.8 billion. This is somewhat worrisome because inventory change has been above +$80 billion for four of the past five quarters: 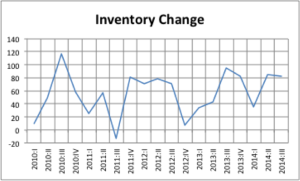 Ever since intellectual property investment was added to U.S. GDP, some economists have worried about the difficulty of obtaining reliable numbers — and therefore the temptation to use this category to fudge the results. The figures for 2014 do nothing to quell those suspicions. In the third quarter IP growth was 8.83% (annualized). And this continues a trend that began in 2o13:III. 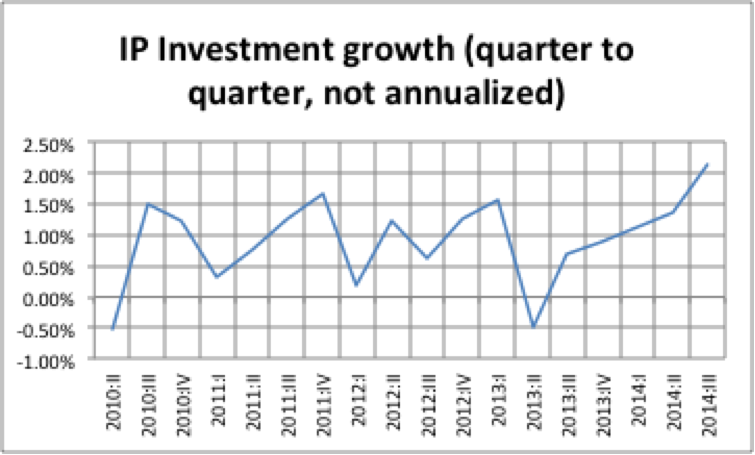 Ironically, the final major contributor to quarter-to-quarter growth was federal defense spending which grew by 16.01%. Tomahawk missiles at $1 million each probably accounted for quite a bit of this growth, followed by drones and their armaments.

A second way of disassembling GDP growth is by looking at the contributions to the current quarter’s growth. Luckily, the BEA produces this breakdown in their Table 1.1.2. Once again, consumption spending leads the way with non-residential private investment in second place. At the detail level, consumption of durable goods, investment in equipment, and government defense spending were big contributors. 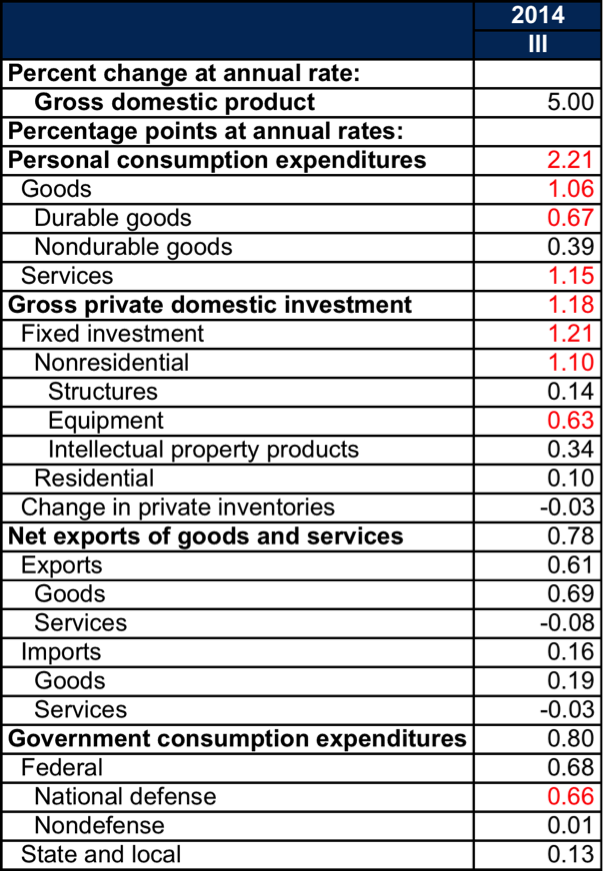 What we’ve seen so far gives us guidance about where to explore further. Specifically, what drove that increase in consumer durables spending? The BEA has the answers once again. Tables 1.5.1, 1.5.2, and 1.5.6 have the data we want. Let’s start by looking at the components of consumer durable spending.

First, let’s look at the quarter-to-quarter growth rate (annualized). Sure enough, motor vehicles and parts grew 11.3% with “recreational goods and vehicles” contributing a whopping 15.7%. An immediate question comes to mind: how much of that growth was caused by subprime lending? (We’re verging on some sort of risk-adjusted GDP here, but I’ll put that exercise off for another day.) 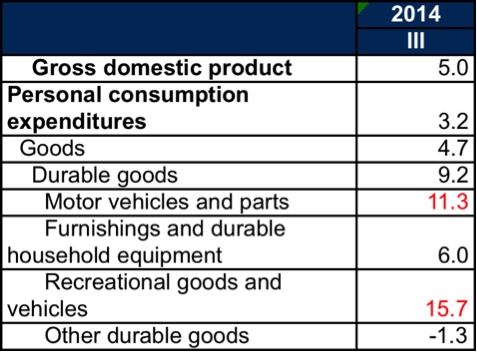 Naturally we also need to look at the contributions to that 5 percent GDP growth: 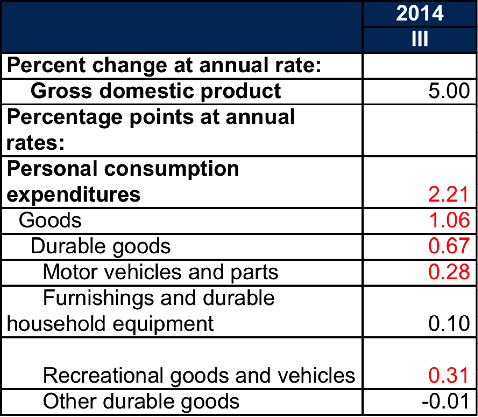 We’ll come back to car and RV sales in the next section. But now I want to look at gross private domestic investment. 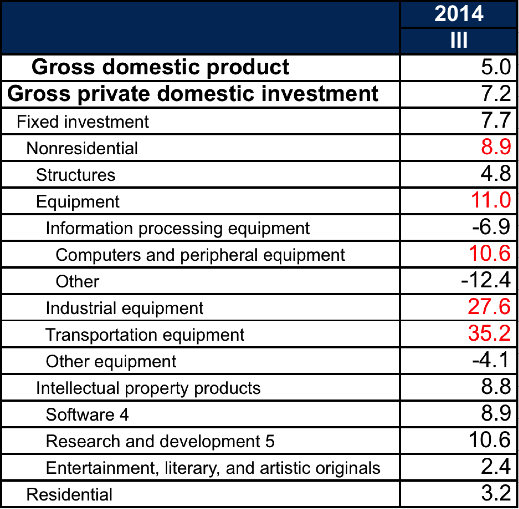 And the contributions to that 5 percent growth: 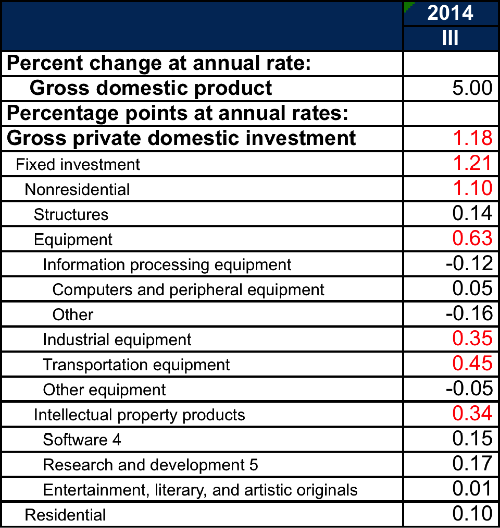 Industrial equipment, transportation equipment, and IP were the main contributors from this category. Transportation equipment? Most likely railroad cars to carry the oil that won’t fit through existing pipelines. I’ve already expressed some doubt about the veracity of the IP numbers so I won’t repeat that argument. Also note that despite a large quarter-to-quarter growth rate, computers and peripheral equipment was a small contributor to the overall growth rate. That is probably because this category was only 0.44% of third quarter nominal GDP.[2]

Experian follows automobile financing quite closely. There are two sources of financing for new vehicles: loans for purchasing and leasing. Experian has broken the data into five risk groups: Super prime, prime, nonprime, subprime, and deep subprime.[3] Here’s the breakdown:[4] 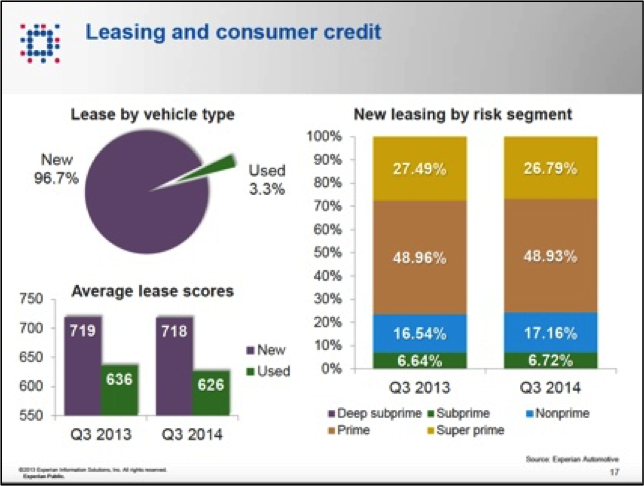 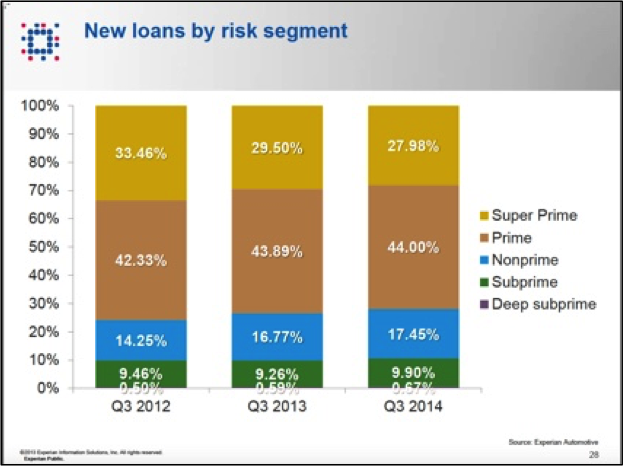 Experian also notes that 84.8% of new car sales are financed.[5] Of that, 29.14% are leased.[6] It’s easy to calculate the percentage of overall sales that were financed by loans versus leasing:

Now we can get some work done. Assume that these percentages apply to both auto and recreational vehicle financing. Those two categories contributed 0.59% to the 5.0% third quarter growth. Of that 0.59%, 0.15% was leasing and 0.35% was loan financed. (The remaining 0.09% of sales were not financed, presumably cash purchases.) Multiplying by the percentage of leases and loans made to subprime and deep subprime borrowers and adding leases and loans gives an overall contribution to GDP growth of about 0.05%. 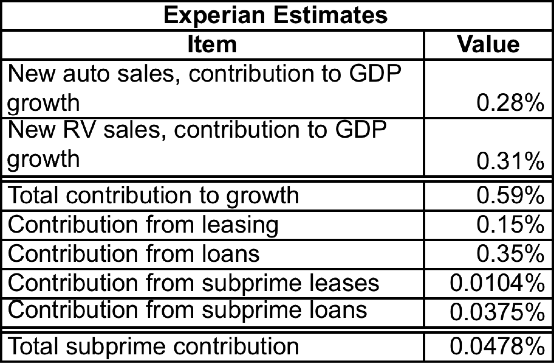 However, there is another estimate from Equifax. In an interview, Ms. Joy Wilder Lybeer said,

“Don’t take the bait on claims that there will be a bubble,” says Joy Wilder Lybeer, a senior vice president at Equifax, a credit-reporting firm. “Subprime is as healthy as it’s ever been.”
…
“One in every three cars sold goes to a subprime borrower, and those loans are performing well,” she says, citing historically low delinquencies, defaults and repossessions as a percentage of outstanding loans.[7]

Well, that’s quite a difference. One third compared to 10.57% is not insignificant. Fortunately, it’s easy to calculate the new numbers. I‘ll assume the lease percentages are those estimated by Experian. 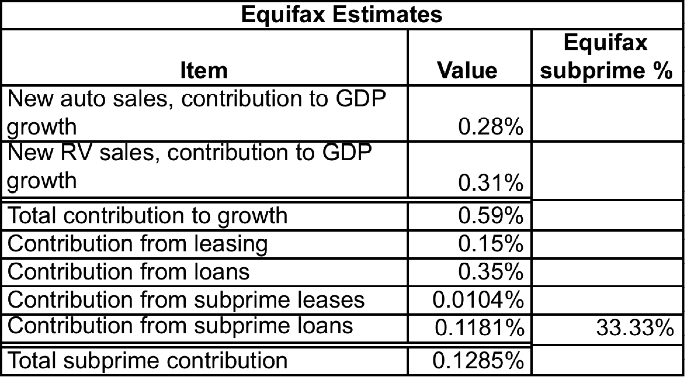 So without subprime lending, third quarter growth would have been 4.9% instead of 5.0% (using BEA rounding conventions). That’s a bit of a difference, but 4.9% growth is nothing to sneeze at.

While subprime vehicle loans contributed to third quarter growth, the total contribution was minor. Far more concerning is the continuing growth of inventories and the apparent burst of growth in IP investment.

[2] I used nominal GDP because no estimate is available for chained real GDP. See Excel worksheet RealGDPdetailChained especially footnote 4: “4. The quantity index for computers can be used to accurately measure the real growth of this component. However, because computers exhibit rapid changes in prices relative to other prices in the economy, the chained-dollar estimates should not be used to measure the component’s relative importance or its contribution to the growth rate of more aggregate series; accurate estimates of these contributions are shown in table 1.5.2 and real growth rates are shown in table 1.5.1.”