Today’s Wall Street Journal has two op-ed pieces on U.S. tax policy and economic growth. The first, and most detailed, is a proposal by Senators Marco Rubio and Mike Lee.   The second, more general, is by Stanford Prof. John B. Taylor. Both advocate lower tax rates and a flatter tax system while broadening the tax base. There’s a good discussion of the Rubio-Lee proposal by Dan Mitchell at the International Liberty blog.

I will summarize both articles later. But first I want to point out a major omission that will doom either proposal to failure. That is the issue of government regulation.

Chicago’s Prof. Casey Mulligan has written two books on this subject. The first is The Redistribution Recession (Oxford University Press, 2012, available at Amazon.com). Dr. Mulligan argues eloquently and with substantial statistical support, that the 2008 recession and ongoing slow recovery are both caused by redistributive and regulatory policies. His focus is on calculating true marginal tax rates. He delves into the details of various policies (such as virtually eliminating the welfare-work requirement) and estimates their impacts on the economy. And he concludes that these policies are among the main causes of slow growth.

His second book on this subject is Side Effects: the Economic Consequences of the Health Care Reform (University of Chicago Press, 2015, also available on Amazon.com, only $2.99 in the Kindle edition). He delves into the intricacies of the Affordable Care Act, pointing out obvious discontinuous, large increases in marginal tax rates. For example, subsidies to low-income households are phased out as income rises. That is a tax on working more that adds to the existing U.S. income tax. Higher (and increasing) marginal tax rates on labor reduce labor supply. Only those who deny the most basic economic principles can doubt that is true.

The implications are clear. Reforming gross taxes, such as the income tax rate schedule, won’t do much unless the micro-taxes and implicit taxes are also reformed. I will add that the incredible explosion of regulations also penalizes work, especially entrepreneurship. I point especially to the Environmental Protection Agency, the U.S. Department of Labor, and the Equal Employment Opportunity Commission. Right now “disparate impact” is being fought in the courts. Most economists recognize that equal opportunity does not guarantee equal outcomes. But disparate impact only looks at outcomes, penalizing businesses that do not meet their quota of race – gender – age groups as specified by the Department of Labor.

John Taylor summarizes his argument in one concise paragraph:

For years I and many others have argued that a return to the principles of economic freedom would convert this not-so-great recovery into a great one. But Washington has not seriously considered pro-growth policy—no tax reform to lower tax rates and spur hiring, no regulatory reform to scale back costly regulations, no new free-trade agreements, no entitlement reform to stop the debt explosion, and at best only a hint at monetary normalization to reduce uncertainty.

He goes on to note that many have given up on the U.S. economy, consigning it to results best described as Franco-Italian. Naturally he urges less regulation and lower taxes. Who in their right mind could disagree with that? (I’ll exclude those inside the D.C. beltway and those who simply refuse to understand even the most basic economics.)

The point I’d like to add is that the U.S. has already done this once. In the 1970s, led by Cornell Professor Alfred E. Kahn, several important industries were deregulated: airlines, trucking, transportation generally, energy, communications (remember the old AT&T monopoly?), and finance (including banking). Each of these industries lowered prices, increased quantity offered and increased the variety of products available to consumers. Arguably, deregulation helped dampen the sluggish growth during those two decades.

The U.S. economy is not a turtle, but a caged eagle ready to soar if released from the captivity of bad government policy. By putting the right policies in place—particularly personal and business tax reform with marginal rate cuts—the U.S. can turn the economy around quickly.

The point is that the U.S. economy is still entrepreneurial and capitalistic. There are entrepreneurs out there who would like to start a business but are discouraged by the paperwork and, frankly, fearful of the seemingly arbitrary way rules are enforced at all levels of government. There are corporate managers who would love to take more risk in their investments but are holding back because they don’t know when the next EPA regulation will shut down their project after they’ve made a substantial investment. Prof. Taylor gets it right in the last paragraph.

I will rely on Dan Mitchell’s excellent summary. Those interested should read his discussion for the complete arguments.

Dan begins with the bad: a top marginal individual income tax rate of 35% that kicks in at $75,000 for individuals, $150,000 for couples filing jointly. Currently the top rate of 39.6% applies to incomes over $400,000. This sounds like a tax increase for a fairly large group of households. My calculations (including a guesstimate of the percentage earning more than $400,000) is that about 6.9 million additional households will be affected by this change. That’s 5.9% of the 2013 total of 116,291,033 households. 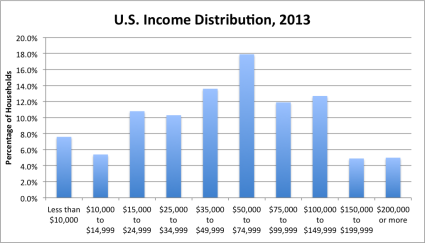 Mr. Mitchell makes an excellent point. I won’t calculate the additional tax revenue this would raise because the negative work incentives in a tax increase like this are substantial. I’ll just suggest that Sens. Rubio and Lee rethink this part of their proposal. Proposing increasing taxes on 5.9% of U.S. households is a non-starter.

Luckily, there are many good features in the Rubio-Lee proposal. Here’s a quick numbered list:

Dan has produced a comprehensive gradebook for the various tax plans. I’ll post it here. If you want to read the explanations, consult his article. Heck, you should do that anyway. 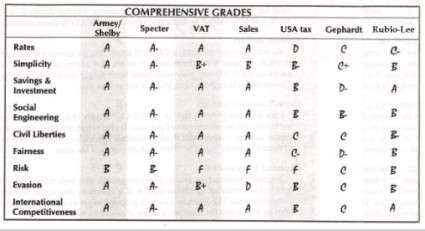 Writing this has led me to once again wonder why such obviously worthwhile proposals die in Washington, D.C. My only conclusion is one that I have expressed for decades: the U.S. tax code is excessively complicated to allow Congress and the President to sneak in tax breaks for their pals. After all, who among us has the time (and intestinal fortitude) to read a 2,000 page tax law? I sure don’t.