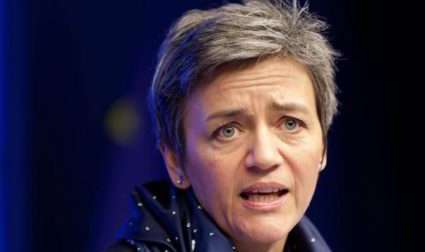 It was a mere 69 days ago – June 23 – that Britons voted to leave the European Economic Union. Yesterday the bureaucrats in Brussels showed that they have learned nothing. Brussels, home of the EU parliament and the European Commission (aka bureaucracy), declared that Apple owed the government of Ireland $14.5 billion in unpaid taxes. Apple and the Irish government have both said they intend to appeal this ruling.

Now all we need is a name for Ireland voting to leave the EU. IREXIT? EIREXIT? Competition Commissioner Margrethe Vestager gave a press conference that pretty much consisted of mudslinging and allegations unsupported by documentation.

The EU decision is a terrific illustration of why the UK is leaving. Bureaucrats in Brussels made a fiscal policy decision that properly belonged to the government of Ireland. The last time I checked, Ireland was still an independent country. And, while Ireland is a member of the eurozone, even the European Central Bank supports fiscal federalism. In fact, that is part of the ECB charter. Apparently the aforementioned EU bureaucrats decided to do the job that is prohibited for the ECB.

The details of the EU decision are important. Under the EU treaty, governments are prohibited from giving special tax treatment to individual companies. The Commission claimed that Apple paid a tax rate of 0.005 percent in 2014. Apple CFO Luca Maestri said that the amount of the taxes owed is a “completely made up number” and there was “no special deal.” Indeed, it’s nearly impossible to believe that Apple’s effective tax rate could have been that small.  Personally, I’m inclined to believe Mr. Maestri.

How Apple Does It

Apple funnels all of its EU profits to Ireland. Under Irish tax law, profits earned in other countries are not taxed. And the other EU countries don’t tax the profits because they are being taxed by Ireland (even though the tax rate is zero). That doesn’t sound like a company-specific tax break to me.

Even the U.S. Treasury Department weighed in via an e-mail.

We believe that retroactive tax assessments by the commission are unfair, contrary to well-established legal principles, and call into question the tax rules of individual Member States. The commission’s actions could threaten to undermine foreign investment, the business climate in Europe, and the important spirit of economic partnership between the U.S. and the EU. We will continue to monitor these cases as they progress, and we will continue to work with the commission toward our shared objective of preventing the erosion of our corporate tax bases.‎

And the government of Ireland, personified by Finance Minister Michael Noonan, stated, “I disagree profoundly with the commission’s decision.” He added that the the government would quickly file an appeal before the EU courts. “This is necessary to defend the integrity of our tax system; to provide tax certainty to business; and to challenge the encroachment of EU state-aid rules into the sovereign member state competence of taxation,” he added.

Best estimates are that the appeal process could take three are four years. The market pretty much shrugged off the EU ruling. Near the close August 31 Apple was up 0.31 points.