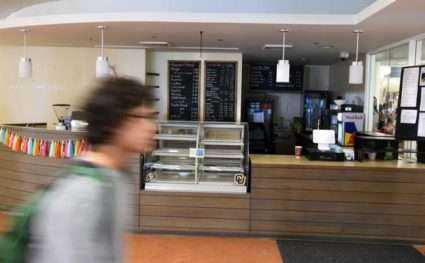 A student walks by the closed cafe in the library of the Leeds School of Business. The Trep Café (short for entrepreneur) was a student-run small business at the University of Colorado Leeds School of Business which operated as a non-profit organization that funded student scholarships. It is now closed. (Cliff Grassmick / Staff Photographer)

Student entrepreneurs at the University of Colorado have learned an important lesson: don’t bother. A state agency has levied fines against a student-run non-profit coffee shop that put it out of business. The power to regulate is the power to destroy.

Colorado Department of Labor and Employment Claims Another Scalp

State regulators in Colorado have claimed another scalp. A student-run coffee shop at the University of Colorado has gone out of business. The reason? A whopping $224,200 fine levied by the Colorado Department of Labor and Employment. The vitally important law the coffee shop broke? Not having workers’ compensation insurance for several months in three different years. From DailyCamera.com:

The Trep Cafe, located on the second floor of the Leeds School of Business Koelbel Building, was notified in April of $224,200 in fines from the Colorado Department of Labor and Employment for not having workers’ compensation insurance for several months in 2011, 2015 and 2016.

The fine was so high because it was Trep Cafe’s second violation of workers’ compensation insurance rules. …

When they learned about the most recent violation, the cafe’s managers sprang into action and got insurance the next day. They attempted to appeal the fine over the summer but learned in an Aug. 5 letter that they still had to pay the fine.

“While the director appreciates the steps respondent is taking to ensure that it remains compliant, it is unclear why respondent did not make these changes sooner, as respondent was fined previously for failing to maintain workers’ compensation insurance,” according to the letter from the Colorado Department of Labor and Employment, which was provided to the Daily Camera by the university.

The managers’ attempts to explain that the business was managed by undergraduate students also went nowhere.

“The statute does not provide exceptions for organizations which are ‘student-operated’ or for non-profit organizations,” according to the letter. …

The goal of the cafe was to give CU students hands-on experience running a small business. All the profits from the Trep Cafe were turned into scholarships for business students.

Caldwell said the fact that the cafe was run by students, who cycled out when they graduated, led to a lapse in communication about workers’ compensation insurance.

She said the managers running the cafe this year weren’t even CU students yet the first time Trep Cafe was fined for not having insurance.

Those students sure learned an important lesson about entrepreneurship. Don’t bother. When state bureaucrats can put you out of business for trivial matters like this, why not just stay home and study instead?

The title of this article is, of course, an homage to Chief Justice John Marshall in his decision in McCulloch v Maryland (1819). This excerpt from Time.com says it all.

Handing down one of the basic decisions of U.S. constitutional law, the Supreme Court ruled in McCulloch v. Maryland, back in 1819, that the Constitution exempts the Federal Government from state taxation. Setting forth his renowned dictum that “the power to tax involves the power to destroy,” Chief Justice John Marshall declared that the states (and, by inference, local governments) “have no power, by taxation or otherwise, to retard, impede, burden or in any manner control the operations of the constitutional laws enacted by Congress.”