Which states gained and which lost? And what does it mean?

Today the Census Bureau released population estimates for the U.S., states, cities, and Puerto Rico. Before delving into the numbers it’s worth asking, “Who cares?”  The correct answer is everyone.  Among the U.S. states, population growth is one of the main drivers of economic growth.  More people mean more workers. More workers mean more output, leading to a higher Gross State Product.

But, equally important, more people also mean more consumers, overall income, and general well-being.  If you favor diversity, the fastest way to achieve it is migration into your state.

For those who want the short version, Greg Giroux tweeted a thread that you can read or download here:

Naturally Census has made the data tables available.[1] Table 2 is quite useful, as it includes growth rates for the country, each state, Puerto Rico, and four major geographic regions.

Before delving into the data, let’s take a minute to consider the implications. The 2020 census will be used to allocate the 435 seats in the House of Representatives. Thankfully, Real Clear Politics has crunched the numbers. From that site,[2]

Notably, this will be the first time in history that California will lose a House seat. For those who are curious, the census determines the number of seats each state gets in the House. It is the responsibility of the state legislatures to draw the congressional districts. Also, remember this will not affect the 2020 election. The midterm elections of 2022 will be the first with the newly-drawn congressional districts.

Over at 270toWin.com[3] they have a map of the electoral college vote in each state. I’ve superimposed the above predictions onto their map: 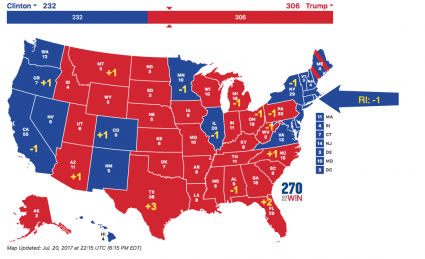 It looks like a net gain of 3 for the red states. Interestingly, red and blue states’ gains and losses are equal with the exception of Texas. That state alone accounts for the gain of 3. But, as always, what’s important are the swing states.

Let’s start with the regions.[4]

The obvious inference from this is that people prefer warmer climates. Later we’ll look at a breakdown of each region by state. That will destroy this hypothesis. For example, the three states with the highest growth in the Midwest were North Dakota, South Dakota, and Minnesota. Those are not exactly tropical paradises. In the West, the leaders were Utah, Colorado, Nevada, and Idaho. Even Las Vegas occasionally sees some snow.

But the real fun is in the South. That includes the District of Columbia with its 17.3 percent growth over the ten years. More on that later. Texas and Florida were the next two, pointing to the fact that a state income tax rate of zero is a powerful attractant to both businesses and people. I’ll return to this idea in the conclusion (and, perhaps, a follow-up article).

How the States Stack Up

The District of Columbia gained population at the fastest rate during these ten years. For that we can thank eight years of the Obama administration and its vast expansion of the Washington bureaucracy. It’s a little surprising that Virginia comes in at 19th place given that many federal government employees live in the suburbs in the north part of that state. Virginia’s population grew by 6.7 percent, leading one to speculate that, perhaps, Virginia is not for lovers after all. 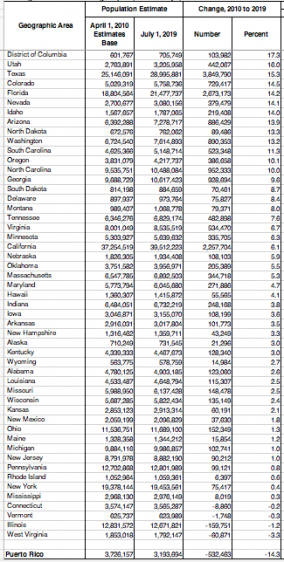 We’ve previously discussed the first six actual states: Utah (16.0%), Texas (15.3%), Colorado (14.5%), Florida (14.2%), Nevada (14.1%), and Idaho (14.0%). Fully 12 states had population growth of 10% or more. (That does not include the District of Columbia.) Four states had negative population growth: Connecticut (-0.2%), Vermont (-0.3%), Illinois (-1.2%), and West Virginia (-3.3%). Connecticut is notorious for high taxes and inefficient state government. Illinois? High taxes, politics dictated by voters in Chicago, and outright corruption. Vermont? People tiring of chasing moose off their property. And, of course, West Virginia continues to be hurt by the slow collapse of the coal industry.

Let’s work from Northeast to Southwest. The Northeaste is led by Massachusetts (5.3%) and New Hampshire (3.3%). Massachusetts has a major advantage: a large number of colleges and universities. This has allowed the state to continue its technology-based growth. New Hampshire has no state income tax. It has become a refuge for those escaping from “Taxachusetts.”

This region has two of the four states whose populations shrank. Here’s the complete list: 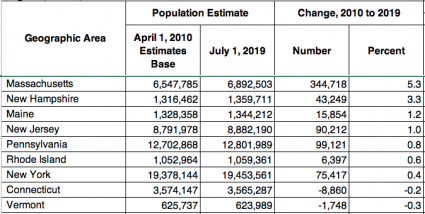 The Midwest has seen most of its growth in the frozen north. North Dakota (13.3%) has boomed because of the fracking revolution in oil and natural gas production. South Dakota (8.7%) has similarly benefited from natural resources. That state also has laws that are very favorable to financial services. You may find that your credit card was issued from there. Minnesota (6.3%) has put out the welcome carpet for immigrants. Add the presence of 3M and vast recreational resources and the state is very attractive for businesses. Illinois (-1.2%) is the third of the four states that lost population. High taxes, crime and shootings in Chicago, corruption, and a state government dominated by Cook County have caused many people who live in the rural areas to flee. Many move to neighboring Indiana (3.8%). 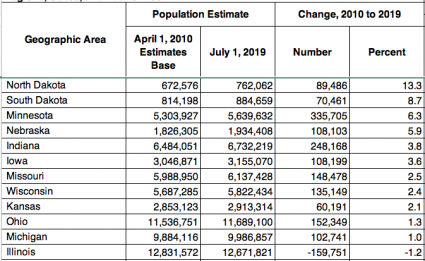 The South is … different. Courtesy of the Obama administration, the District of Columbia’s population grew 17.3 percent. Among the actual states Texas (15.3%), Florida (14.2%), South Carolina (11.3%), and North Carolina (10.0%) all recorded double-digit gains. The overall success of this region is somewhat offset by Mississippi (0.3%) and West Virginia (-3.3%). Thus the South has the fastest growing and the fastest shrinking states. 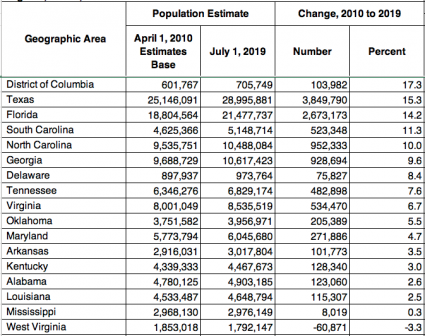 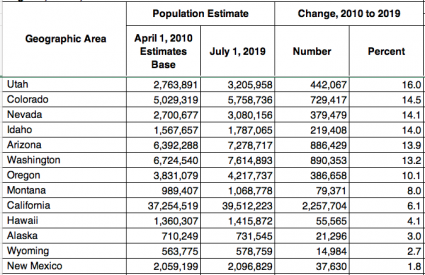 Despite ongoing disasters (many self-inflicted) California managed to grow 6.1%. But the trend is not good. The best guess is that the Golden State will lose one seat in the House of Representatives after the 2020 census.

Just out of curiosity, I gathered some data on state taxes from the Tax Foundation. That organization produces a huge quantity of data, including state and local government information.  One such publication is the State Business Tax Climate Index,[6]  I did a quick regression of the rankings of population growth against the overall state tax rank.  The coefficient of tax rank was +0.42.  That seems to indicate that a higher tax rate leads to a higher population growth rate.  The issue is actually straightforward  Population growth is ranked from highest to lowest.  Taxes are ranked from low to high.  The correct interpretation is that if your state improves its tax ranking by 2.5 places, it is likely to increase its population growth rate rank by one place.  Incidentally the t-statistic on this coefficient is 3.22, meaning the p-value is well under 0.005.  (In fact, the p is 0.0023.)  For statistics geeks, here are the complete regression results. (n=51 because I included the District of Columbia.) 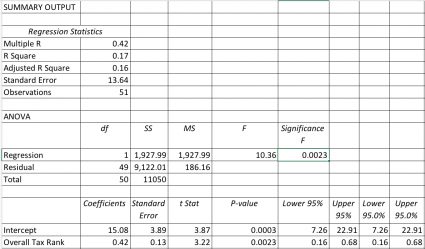 This is, of course, not a complete model of migration.  Far from it.  But there seems little doubt that the tax burden in each state has a significant impact on the migration into or out of a state.  That, after all, is one element of the ongoing pitch Texas makes to California: Tired of high taxes?  Move on down here.

There has been migration away from the Northeast and Midwest toward the South and the West.  But it’s important to look at the individual states.  North Dakota’s growth is comparable to the fastest-growing states in the South and the West.  The outlier in the South is the District of Columbia.  Population growth there was fueled by the explosive growth of the federal government during the Obama administration.  Personally, I hope to see D.C.’s population decrease in future years.